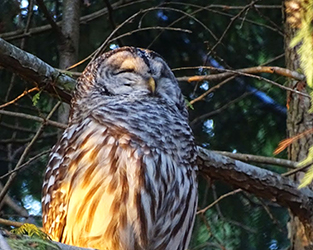 A special thank-you to all the wonderful Nocturnal Owl Survey volunteers across Canada who help inform on the distribution and dynamics of our owl populations! Here are some regional updates and opportunities to get involved.

Atlantic Canada
By Amy-Lee Kouwenberg, High Elevation Landbird Project Coordinator, Bird Studies Canada
In 2018, volunteers completed over 100 survey routes across New Brunswick, Nova Scotia, PEI, and Newfoundland. Thanks to growing local enthusiasm, the Newfoundland survey increased to 10 routes! We continue to seek volunteers for routes in Newfoundland and Labrador (see current routes).
There are also routes open in Nova Scotia and New Brunswick, particularly in the Miramichi, Blackville, and Plaster Rock areas. Paula Dodaro in Nova Scotia recently reflected on a memorable survey:
“There had hardly been any action in the clear-cuts when on Stop 10, we had a Barred Owl on one side of the car and another on the other side … ‘owl-hell’ broke out. I do remember trying to scribe f(owl) language from both sides of the road when the owl on my left swooped over the hood of the car.”
Please contact Amy-Lee if you are interested in being part of the excitement. If any current volunteers have not yet submitted 2018 survey data, please send forms by mail or email or enter data online.

Québec
By Andrew Coughlan, Director, Québec, Bird Studies Canada
For the second year in a row, survey conditions in Québec in 2018 were far from favourable. Nonetheless, thanks to the commitment of our volunteers, data for nearly 100 routes were submitted.
The number of surveys conducted was comparable to that in 2017, but the number of owls reported was up from 358 to 392. While most species remained at similar levels to the previous year, the number of Northern Saw-whet Owls increased from 11 to 46. Interestingly, one-third of these reports were from just two survey routes in the Laurentides. Some participants commented on lower numbers than usual, while others in the extreme southern part of the province reported high numbers.
If interested, please contact Andrew to determine the possibility of establishing a route in your area. Volunteers are especially needed in eastern and northern parts of the province.

Ontario
By Kathy Jones, Ontario Volunteer Coordinator, Bird Studies Canada
2019 represents the 25th season of the Ontario Owl Survey. The program has become a tradition for many, including long-term participants Ellen Cramm & Brian Ratcliffe:
“It is hard to believe that it has been 24 years since Ellen and I first started surveying Route #71, Arrow River in 1996 … We have had the great fortune to bring along many young people to experience the owl survey. We had always hoped that this interaction would help ignite a passion for wildlife. One such person was a young Lakehead University student by the name of Jody Allair [now Bird Studies Canada’s Manager of Citizen Science and Community Engagement!] … It is exciting standing on the side of a bush road, in the middle of the night, just listening … Looking forward to another 25 years.”
We need a few hardy teams to survey northern routes – please see our map. The 2018 summary will be available in the Ontario Owl Survey Newsletter in March! 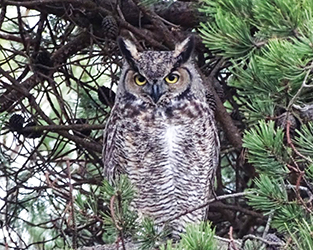 Manitoba
By Dr. Christian Artuso, Director, Manitoba, Bird Studies Canada
In 2018, nearly 100 routes were surveyed by 110 volunteers, although data entry is not yet finalized. Nine owl species were detected, with Northern Saw-whet Owl and Great Horned Owl having the most records. It was a low year for detections of specialists such as the Boreal Owl and Great Gray Owl, but there were above average detection rates for the generalist Barred Owl. There were also very low detection rates of the irruptive Long-eared and Short-eared owls.
An article by Christoph Ng, Dr. James Duncan, and Dr. Nicola Koper summarizing their research on Manitoba owl survey participants is included in the Winter 2019 issue of BirdWatch Canada magazine. Keep an eye on your mail if you are a Bird Studies Canada member! Or, read the open-access academic paper.

Saskatchewan
By LeeAnn Latremouille, Saskatchewan Breeding Bird Atlas Coordinator, Bird Studies Canada
The Saskatchewan owl survey is slowly but surely expanding its reach. While data from 2018 continue to trickle in, at least 12 volunteers surveyed 14 routes. They detected 26 owls, comprising Great Horned, Northern Saw-whet, and Boreal owls. In an effort to bring the survey to more participants and contribute owl records to the Saskatchewan Breeding Bird Atlas, a protocol for the creation of new survey routes was implemented in 2018. As a result, 4 new survey routes were added and more are planned for 2019! A word from long-time owl surveyor Ryan Dudragne:
“The owl survey is fun and I like being out at night … Owls as a group are romanticized by society and when you hear them it’s magical, whether it’s a Northern Saw-whet Owl tooting its call or a familiar Great Horned Owl calling in the distance.”
Please contact LeeAnn for information on pursuing a survey near you.

British Columbia and Yukon
By Graham Sorenson, BC Projects Coordinator, Bird Studies Canada
In 2018, 91 volunteers surveyed 52 routes, detecting 168 owls. The mean number of owls detected per stop was down from the 2017 average, though still above the long-term average. Northern Saw-whet Owls normally have the most detections, however they were much lower this year with only 33 detections. Great Horned Owl and Boreal Owl detections were above average again this year. Four routes were surveyed in June to detect Flammulated Owls, yielding 11 detections.
The program continues to grow! Please contact Graham for more information about the British Columbia and Yukon Nocturnal Owl Survey.