Join us in welcoming the Canadian Nightjar Survey 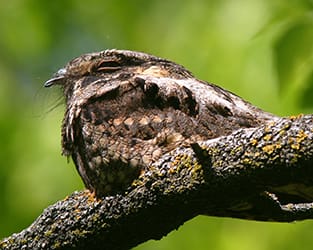 What on earth is a nightjar? The birds that we collectively call “nightjars” are nocturnal or crepuscular (active at dawn and dusk). They are medium in size – about the size of a robin, but with longer wings. Mottled plumage allows them to camouflage well during the day. Their other features include large, dark eyes and a very wide mouth ideal for catching insects in flight.

Nightjars are similar to owls and secretive marsh birds in that they are incompletely monitored by broad-scale programs such as the Breeding Bird Survey. To track population trends for these particular bird groups, it is important to have long-term, focused efforts in place. For nightjars, this is all the more vital given the ongoing decline of aerial insectivores (birds that hunt flying insects) and the conservation status of the three nightjar species that regularly breed in Canada. These include: the Common Nighthawk, which is listed as Threatened in Canada, though was recently reassessed by the Committee on the Status of Endangered Species in Canada as being of Special Concern; the Eastern Whip-poor-will, which is listed as Threatened; and the Common Poorwill, which is listed as “Data Deficient.”

We are therefore delighted to announce that, in collaboration with Environment and Climate Change Canada, Birds Canada will be providing a long-term home to the Canadian Nightjar Survey. Over the past decade, this survey has been excellently developed and coordinated by the Vancouver-based non-profit WildResearch. We are particularly happy to say that the current team behind the project, spearheaded by Elly Knight, will be staying on as regional coordinators. If you participated in the past, thank you—we hope that you will be keen to continue with the project, to help us learn more about these enigmatic birds.

We’d also like to encourage new volunteers to join the effort, particularly in regions that have been less well-covered to date, such as Québec and southern Labrador. This simple evening roadside survey, running from mid-June to mid-July, requires each volunteer to visit 12 stops along Breeding Bird Survey routes.

If you are interested in participating, stay tuned! The sign-up page is not quite ready, but will be soon. Watch out for further announcements in our enews in the weeks to come, and for a special feature on the survey in the upcoming Spring 2020 issue of BirdWatch Canada. 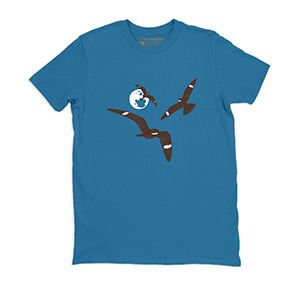 The initial cross-Canada expansion of this survey was aided by support from the Baillie Fund. This fund channels a portion of the revenue from the Birds Canada Great Canadian Birdathon to other non-profit organizations and individuals for projects that advance the understanding, appreciation, and conservation of birds and habitats. It’s fitting that the Common Nighthawk is the featured bird on this year’s Great Canadian Birdathon t-shirt! You can be the proud wearer of one of these great shirts if you participate in the Birdathon this May. 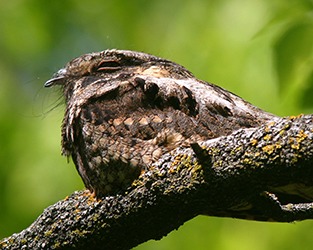