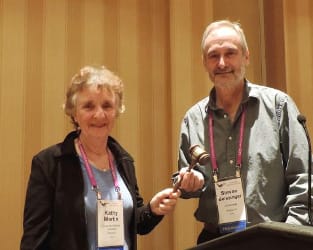 The team at Bird Studies Canada extends our hearty congratulations to Dr. Kathy Martin on being elected President of the American Ornithological Society. Kathy is a scientific advisor to Bird Studies Canada and a former member of our Board of Directors.
As a long-term supporter, Kathy has played several other important roles for Bird Studies Canada. She had a hand in establishing our British Columbia provincial program from 1999-2000. In the mid-2000s, Kathy’s mentorship and collaboration catalyzed a series of articles in our quarterly publication BirdWatch Canada. Her idea brought together our staff and conservation scientists across the country to share current science and conservation issues with Bird Studies Canada’s growing global family. We learned a lot with articles like “Beetlemania in British Columbia” (about the mountain pine beetle epidemic), “Birds in High Places” (about alpine adaptations and climate change), and “Keystone Carpenters” (about the role of woodpeckers in forest bird communities).
Through her University of British Columbia Department of Forestry and Conservation Sciences program, Kathy and her team of postgrads and postdocs were special contributors to the Atlas of the Breeding Birds of British Columbia. They shared long-term datasets from sites like Riske Creek in the Chilcotin, provided in-kind support, and volunteered directly for the project. Kathy also invited Bird Studies Canada staff to give guest lectures to undergraduate and postgraduate classes, and convened Bird Studies Canada with Dr. Darren Irwin’s lab at UBC’s Biodiversity Research Centre for a study of sapsucker hybridization zones in BC (led by Sampath Seneviratne).
Kathy extended an invitation to Bird Studies Canada to co-host the North American Ornithological Congress in Vancouver in 2012, in her role as Chair of the congress. The conference was a great success that served to further enhance Bird Studies Canada’s scientific credibility.
Kathy is a leader in her field, and will make a wonderful leader of the American Ornithological Society. Please join us in congratulating Kathy on her latest achievement!