Each winter, volunteer participants with Project FeederWatch count the birds outside their window and submit their data to help monitor and increase our understanding of bird populations.

This past season was a fantastic one for Project FeederWatch, with over 5000 participants in Canada!  Thank you to everyone who watched birds and contributed their counts.

We’ve summarized some of the most exceptional results below – but stay tuned for Winter Bird Highlights (the FeederWatch magazine) and BirdWatch Canada for more details about the season.

The 2022-23 season starts in November. We hope you’ll join us for another exciting year! Learn more.

Project FeederWatch is made possible thanks to our sponsors Armstrong Bird Food and Wild Birds Unlimited, and our thousands of amazing participants. The 2021-22 season started off chilly! Extreme cold, high winds, and snow left much of Canada under weather warnings during December. We received lots of emails from British Columbia participants about the deep freeze in southern and interior regions of the province in late December. FeederWatchers expressed concern about Anna’s Hummingbirds and struggled to keep hummingbird feeders from freezing. One of our favourite photos, from David Aldcroft, shows over 20 Anna’s Hummingbirds at his feeder. Some interesting highlights included a Sooty Grouse at a feeder in North Vancouver and a Lesser Goldfinch in Okanagan-Similkameen. Common Redpolls visited over 65% of sites in Alberta from January through the end of March. In years when seed crops on birch, alder, and spruce trees are in short supply, these birds move south and descend on feeders – these bird movements are called “irruptions”.  Some other interesting highlights included an American Three-toed Woodpecker in Red Meadows, a flock of 1000 Bohemian Waxwings in Red Deer, and a rare Eurasian Tree Sparrow in Fort McMurray. The Eurasian Tree Sparrow was introduced to North America in 1870 and now has a very small range in Missouri.

It was a good year for seeing Common Redpolls in Saskatchewan as well. Vicky St Germaine of Prince Albert reported high numbers every week from mid-December through April, with a high count of 450 Common Redpolls on January 22. Pine Siskins were scarce. An excellent seed crop for spruce, hemlock, and eastern white cedar trees in the northern Boreal Region resulted in many Pine Siskins staying north this past season, so these birds did not visit feeders in Saskatchewan.  A rare highlight was a Varied Thrush in Lebret.

Common Redpolls irrupted across Manitoba, visiting 70% of sites. Gray Partridges were reported at more sites than usual this year (5%) with an average group size of 8.9 birds; there were no reports of Gray Partridges during the early years of Project FeederWatch (1988 through 2004). Eurasian Collared-Doves continued expanding their range into Manitoba this season – one FeederWatch participant had 38 of them visit! Some other cool observations included a Harris’s Sparrow in Portage la Prairie, Sharp-tailed Grouse at a feeder in St. Andrews, a Varied Thrush in Winnipeg, and a Townsend’s Solitaire at a heated birdbath in Winnipeg.

It was not an irruption year in Ontario this past season – Pine Siskins, Common Redpolls, and Evening Grosbeaks stayed north. A few fun highlights included the first-ever appearance of a Brown Creeper on the Ontario FeederWatch Cam in Manitouwadge, a very early Eastern Meadowlark on March 10 in Clearview, and a Gray Catbird in Parry Sound. A high count of 500 American Crows was reported in Kitchener.

A rare west-coast species, a Varied Thrush, was shared between two FeederWatch sites in Wawa: It went back and forth between Bob Elliott’s site and Jim Oleynik’s. This bird is rare at any time of the year in Ontario and should be on the coast of British Columbia at this time of the year.

There were lots of Pine Siskins reported in Québec in February and March, which visited over 50% of sites in the province. A mega-rarity was reported by Regent St Hilaire in Saint-Marc-des-Carrières: a Brambling, a very surprising visitor from Eurasia! Another unusual visitor was a Hermit Thrush at Edith Dubreuil’s bird bath in Le Haut-Saint-François. This bird should be wintering farther south.

FeederWatch participants in New Brunswick benefitted from a movement of Evening Grosbeaks. These birds visited over 25% of feeders from February through April. One participant had a group of 64 at his feeders in Sunny Corner.

Some interesting highlights included a pair of Tufted Titmice in Saint Andrews, hundreds of kilometres north of their typical range, and a rare Yellow-throated Warbler (this bird typically winters in Central America).

American Robins abounded in Nova Scotia during the 2021-22 season. In fact, nearly 60% of FeederWatch sites reported robins in mid-February. Warmer winters may result in more robins remaining in place year-round. If there’s enough food, robins will stay. FeederWatch participant Debby Trask-Cushing of Plympton had 50 robins! She wrote, “We have many berry bushes close to the feeder area that produced a bumper crop this past fall. So during the past months lots of robins have been around on multiple days.”

Lots of FeederWatch sites were reporting American Robins this season. During the February 5-18 count period, 67% of the sites reported robins! Blue Jays were reported at nearly 100% of feeders every week of FeederWatch. Unexpected sightings included an American Kestrel and a Gray Partridge.

The hotspot for rarities this year was in Saint Lawrence, at Lillian Walsh’s feeders. These feeders hosted four rarities: Savannah Sparrow (north of its winter range); and three species that are rare at any time of the year in Newfoundland, Clay-colored Sparrow, Indigo Bunting, and Lark Sparrow! These latter three species typically winter in the southern U.S. and Central America.

Red Crossbills and Red-breasted Nuthatches were prevalent during the start of the season in Yukon Territory but moved out in mid-February. This past season we received data from two sites in Northwest Territories; Pine Grosbeaks topped the charts there this winter, visiting both sites throughout the entire season. 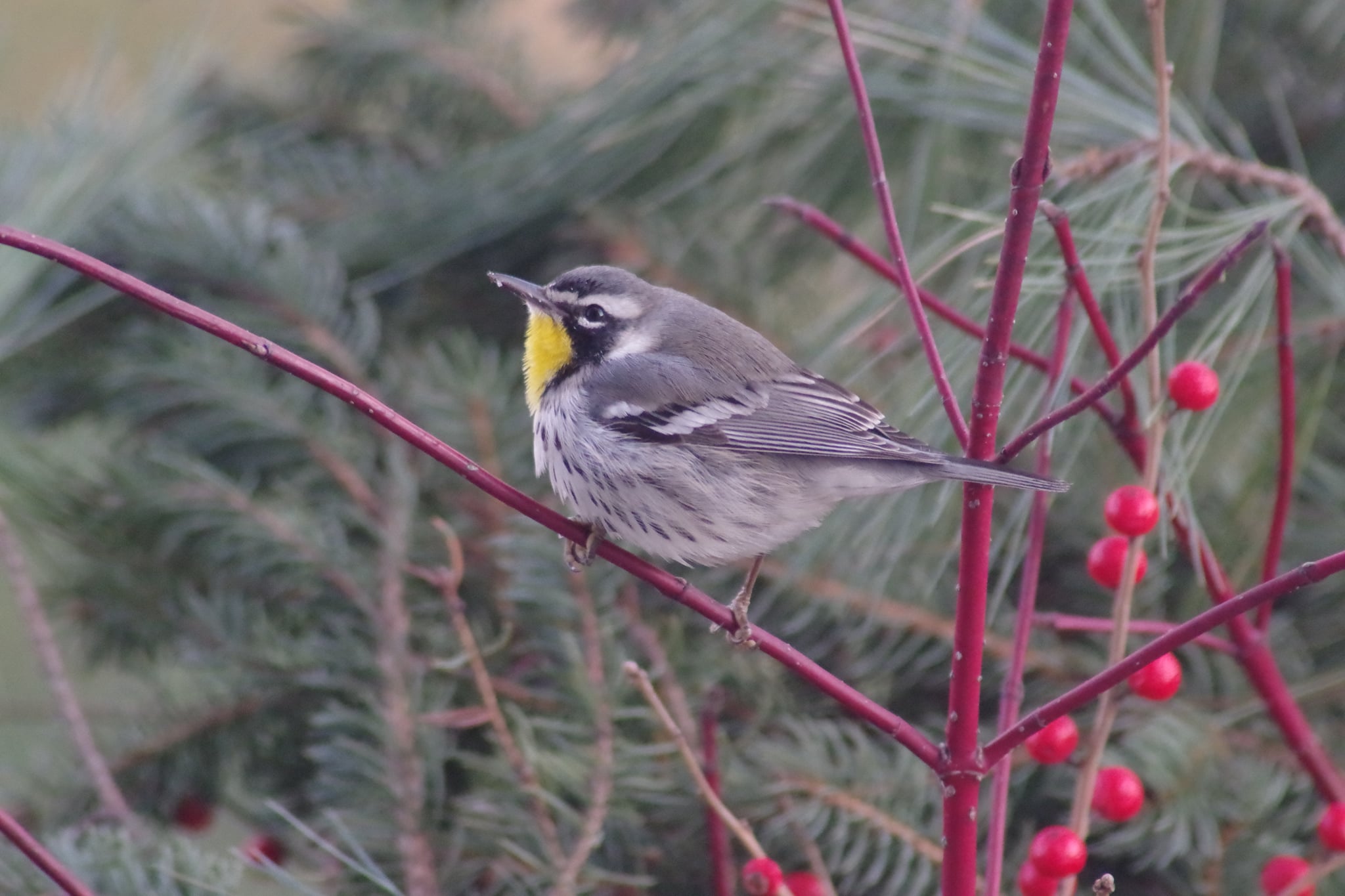