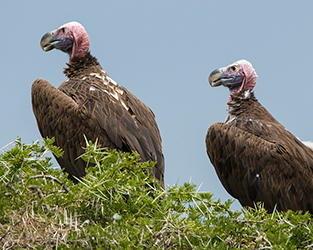 Champions of the Flyway is almost here! Race day is March 26th. What is this event all about? Each year, teams from around the world – supported by bird lovers like you – come together to raise as much awareness and new funding as possible for a conservation cause. This year, it is for one of the biggest bird conservation issues in the world, and for the first time, Canada is being represented – by a team from Bird Studies Canada, Team Canucks.
The Cause
Africa’s vultures are barreling towards extinction faster than almost any other animal group. Five species have lost over 90% of their populations in the last 30 years. The main driver is poisoning, followed by electrocution, collision, and harvesting vultures for use in traditional medicine or cultural practices. Wildlife poisoning is a familiar and divisive in many other nations, and is being dealt with in Canadian Parliament right now. We have already lost one vulture from Canada: the California Condor, which historically ranged throughout the Rockies as far north as southern BC and Alberta until it was wiped out by poisoning and hunting.
The poisoning impacting Africa’s vultures occurs for two reasons. One is human-wildlife conflict between livestock owners and predators; livestock carcasses are poisoned as a retaliation against predators, and scavengers like vultures are also affected. Poachers are also implicated in poisoning vultures. Vultures are nature’s clean-up crew and discover animal carcasses quickly. Their appearance tips off anti-poaching units, helping them apprehend poaching gangs. The gangs respond by poisoning the carcasses to kill nature’s whistleblowers. One poisoned carcass can kill 500 vultures, which explains such dramatic rates of decline.  This graphically illustrated thread explores the issue in greater depth.
Vultures are not the only animals impacted by poisoning in Africa’s Rift Valley and savannahs. Lions, migratory birds, and others are also affected, with massive implications for ecosystems and human wellbeing. Photographer Charlie Hamilton James recently made this powerful, emotive video following National Geographic magazine’s August 2018 exposé of the issue.
All the funds raised by the Champions of the Flyway will scale-up a proven rapid response and community-based conservation initiative in one of the last vulture strongholds, the Mara-Serengeti ecosystem.  Just last month, this team saved up to 100 vultures from feeding on a poisoned hyena carcass. BirdLife International Partner Nature Kenya will lead the work. 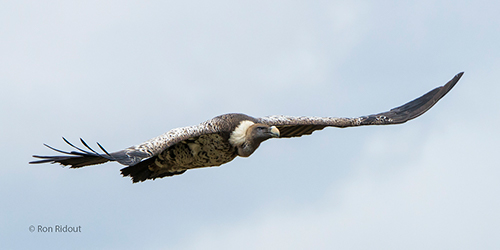 How You Can Help
We urge you to get involved through this innovative blend of birdathon and campaign hosted by BirdLife Partner the Society for Protection of Nature in Israel at migration hotspot Eilat. Please follow #GoVultures, #COTF19, and #FlywayChampions on social media, and donate to Bird Studies Canada’s Team Canucks (#TeamCanucks).
Thank you to all who helped us destroy our initial fundraising target of $10,000.  We are now aiming for $15,000 so we can make an even bigger impact for vultures!
On Behalf of Vultures, Thank You!
We extend a huge thank-you to Vortex Optics Canada, Eagle-Eye Tours, and the Canadian Raptor Conservancy. Without your support we would not be able to participate. We are equally grateful to Gregg McLachlan at Work Cabin Creative for making the video below to promote our effort, and to all of the generous individual donors who have pledged support so far.

Thank you all so much again for your support, and we look forward to sharing the experience with you through social media as the big day approaches, and reflecting on it all when we return.