Why I Do the Great Canadian Birdathon and Think You Should, Too!

By Kevin Shackleton, birder and veteran Birdathon participant from Newmarket, ON 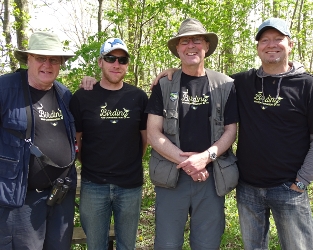 My original motivation for doing a Birdathon was to see more birds, with the help of three excellent birders who knew their way around my home region. I participated in my first Birdathon in 1994. While pinballing through York Region, Ontario, my team and I discussed the possibility of seeing 150 species on a Big Day. That goal stayed with me, and remained foremost in my mind when I went on to form a new Birdathon team – the West Humber Naturalist Warbler Hunters. This sparked an element of friendly competition between my new team and my old one.
There was often an air of desperation in my team as we neared the end of each Birdathon and were running out of places to find more species. We tried not to reveal our total if we crossed paths with our rivals. It seemed that they usually edged us by a species or two, and we often wondered out loud how they could always find that one extra bird. We were elated the few years when we equalled or exceeded their tally.
After one particularly disappointing result, we gave up on York Region and moved into Simcoe County. We had immediate success in 2009, and resolved to do future Birdathons within that county – one of Ontario’s largest.
We had a run of years in which we tallied over 140 species. Then, in 2017, we reached and exceeded my goal of 150 species in one day! It was a team effort, with Ron Fleming, Art Needles, and Christopher Dunn all adding species. Ron’s Golden Eagle and Chris’s Peregrine Falcon were the most notable finds. One of my original team members, John Watson, did his Birdathon in England that spring and missed our record-setting day, but will rejoin us in 2018.
If seeing a lot of birds is the main motivation behind your Great Canadian Birdathon (as it was for me at first), there are some things you can do to maximize your total. I spend some time each winter listening to CDs to be able to identify birds by song. I also scout out varied habitats in May to see if uncommon or difficult-to-find bird species might be present. Our Birdathon route is carefully designed to hit these locations at the best times of day to visit them. Preparations like these are especially important considering that some of our sponsors pledge a per-species amount.
Having fun is also a worthy goal. An enjoyable Birdathon requires a team with good humour and good birding skills, and my team scores highly on those attributes. My stomach has often been sore from laughing at the jokes and badinage. At a certain point, we began sitting down to a steak dinner the night before each Birdathon – a pleasant tradition that has continued to this day!
Yet another reason for doing a Great Canadian Birdathon is to raise money for research and conservation, and over time, my motivation has developed along this track. George Pond was consistently at the top of the fundraising sheet, and I decided to see if I could meet or exceed his total. Naturalist organizations are perennially short of funds and it was a way to fill the coffers of my club, the now disbanded West Humber Naturalists. We now have a second top-ten fundraiser on the team in Art Needles. Our share of the funds we raise this year will go to the Kawartha Field Naturalists as they seek to improve a nature reserve they steward for Ontario Nature.
Birdathons can turn up life birds and lifelong friends. I have had a few memorable sightings over 24 years of Birdathons (Blue-winged Warbler and Brant Goose being just two), but the best part has been the friends I made while chasing birds. That is why I think you, too, should take part in the Great Canadian Birdathon.
Kevin Shackleton is Team Captain of the Warbler Hunters. Visit their team page if you’d like to help them meet their 2018 fundraising goal. Thank you, Kevin, for taking on your 25th Birdathon, and for all the funds you and your teams have raised for conservation over the years!