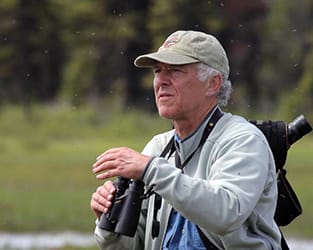 When did you first fall in love with birding? If it was during spring migration, you’re not alone – that’s how George Clulow got hooked! After moving from Essex, England to Winnipeg in 1973, one fateful spring galvanized his interest in birds into a more serious undertaking.
George now resides in Burnaby, BC, where he has been a force for birds for decades. He served multiple terms on Bird Studies Canada’s National Science Advisory Council and Board of Directors, and is a long-standing Baillie Fund trustee. His Citizen Science contributions have included the British Columbia Coastal Waterbird Survey, the Christmas Bird Count, consistent eBirding, the British Columbia Nocturnal Owl Survey, and the British Columbia Breeding Bird Atlas. George is also significantly involved in the British Columbia Field Ornithologists and leads bird walks for the City of Burnaby.
“Birds are important to me because they are my most direct connection to the outdoors, the passing of the seasons, and the magic of the natural world,” says George. “Although I really enjoy birding alone, I also enjoy the social aspects of the pastime … The science of ornithology is fascinating, and being able to contribute some small pieces to that enterprise is a bonus.”