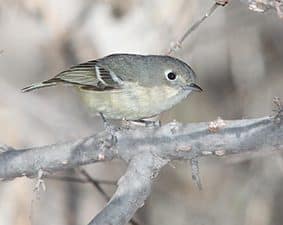 It was Day Three of the 2017 Great Backyard Bird Count. The morning began with drizzly conditions, but after a few minutes of counting, rain began to pour from the sky. As the downpour continued, I counted robins, blackbirds and juncos, periodically wiping the lenses of my binoculars. “Fifty-five, fifty-six, fifty-seven robins,” I said aloud. I watched as the rusty birds pulled giant earthworms from the moist ground of our back pasture and Red-winged Blackbirds called from the cattails of the nearby marsh.
After a short time, the morning sun broke through the clouds, giving a reprieve from the rain. I moved to our front yard to count birds at the edge of the nearby woods. My ears tuned to the sounds of melodic songsters resonating from the damp, dense foliage, I approached cautiously. Catching sight of a small, familiar bird, I recorded the sighting on my now-damp pad of paper. The ink smeared as I wrote, “1 Black-capped Chickadee.”
While searching the evergreen boughs for signs of bird life, I heard a unique call: one I’d heard before, but never been able to identify. The bird sounded close, and I attempted to write down an ‘English translation’ of the birdsong.
Soon I heard a distinctly different call from the first – one I didn’t recognize. I lifted my binoculars once more in an attempt to locate the singer. Just then, an olive-coloured bird flitted into view. I examined its field markings, and, at first glance, thought it was a Ruby-crowned Kinglet – though there was something different about it. I looked for an inconspicuous ruby crest, but didn’t find it. I watched the bird for a few minutes as it quietly foraged among the branches. Then it turned to look at me and disappeared from view, its olive feathers being the perfect camouflage.
Back inside, I began to record my sightings on eBird. I hesitated to record my ‘Kinglet,’ and decided to consult my bird ID apps further. “Smaller than a robin, olive green, in trees and bushes, yes, that will do,” I thought to myself. But another bird in particular stood out – a Hutton’s Vireo. Could it be? It certainly looked like the little olive bird I had seen, and the song matched the calls I had heard! Indeed, it was a Hutton’s Vireo: a lifer for me and the highlight of my GBBC 2017 experience.