Ups and Downs in the Atlantic Piping Plover “Mating Scene”

By Laura Bartlett (Nova Scotia Program Coordinator) and Denise Maillet (New Brunswick Piping Plover Project Coordinator), Bird Studies Canada
Volunteers and staff with the New Brunswick and Nova Scotia Piping Plover Conservation Program survey over 50 beaches at regular intervals throughout the spring and summer each year. Thank you to the dedicated volunteers and partners who help make this difficult undertaking possible. Together in 2019, we conducted over 600 beach surveys!

Nova Scotia
The 2019 nesting season got off to a cold and wet start. Comparisons between this year and 2018 showed fewer nests and pairs at the start of the season, but by the end, these intrepid birds had turned it around!
At 53 beaches across Nova Scotia, our staff and volunteers recorded a total of 40 Piping Plover pairs, which managed to fledge 67 chicks! Parks Canada monitored the Kejimkujik Seaside and recorded an additional 6 chicks, for a total of 73 fledged chicks. That’s 10 more fledged chicks than our team and Parks Canada observed in Nova Scotia in 2018.
On their own, the numbers of plover pairs and chicks do not tell the full story. The goal of recovery efforts – as outlined by Environment Climate Change Canada’s Piping Plover Recovery Strategy – is to achieve and maintain a productivity rate (the average number of fledged chicks per pair) of at least 1.65. This has been identified as the productivity rate needed to ensure the recovery of this Endangered species. Northern Nova Scotia had a very productive year with 2.2 fledged chicks per pair, a big jump from last year’s 1.8. Southern Nova Scotia had more chicks and pairs this year than last year, but the productivity rate remained constant at 1.3. The productivity rate for Nova Scotia as a whole remained consistent from 2018 to 2019, at 1.5. Given the slow start to the season, we are pleased with these results.
New Brunswick
This year, we recorded 7 pairs on 4 beaches in Southeastern New Brunswick, which is on par with last year. It was a difficult year for nesting plovers in this region. There were 8 nest attempts, 6 of which failed mostly due to high tides or predation. Two nests hatched, but only 3 chicks managed to fledge. This means Southeastern New Brunswick had a productivity rate of 0.43 fledged chicks per pair, far below the recovery goal of 1.65 and below last year’s rate of 1.71. Though this is disheartening, it is important to remember that the recovery of an Endangered species is not linear – there will always be ups and downs. It is important to look at trends over longer periods of time in a wider geographic area. In the coming months, we will meet with other organizations monitoring Piping Plovers throughout the Atlantic provinces to assess how the species is doing overall across the region.
A Plover Love Triangle
Individual plovers will often return faithfully to the same beaches every year, but they do not always keep the same mate. This year, we observed a particularly complicated love triangle all centered around adult female with the band ID “3T”. 3T and her partner “N1” were one of the first pairs to nest in Nova Scotia. They hatched 4 chicks on June 4th. Together, they cared for the chicks until 3T decided to initiate a second nest with “9L,” who had already had a failed nest with a different female! Many Piping Plovers will re-nest if their first attempt was unsuccessful, but it is very uncommon this far north in their range for a Piping Plover to begin a second nest when the first nest was successful. Though the original 4 chicks all fledged, the second nest did not fare so well. Still, this uncommon situation is an interesting example of how hard these birds can work to produce more plovers! 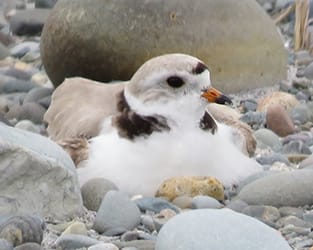 Thank You
Thank you once again to all the volunteers and supporters who pitched in to help plovers this season. A special thank-you as well to our program supporters who make this work possible: the Government of Canada (Habitat Stewardship Program for Species at Risk and Environment and Climate Change Canada), NS Environment, NS Species at Risk Conservation Fund, NS Student Employment Program, Friends of Kejimkujik Cooperating Association, Service Canada, and individual donors.