May 27th, 9pm. The darkness slowly falls around us as we wait silently on a remote forest road in New Brunswick’s Christmas Mountains. My heart is beating quickly and I can feel the excitement of our three High Elevation Landbird Program technicians – Jenna, Thomas, and Cléa – standing next to me.

“Don’t worry, the Bicknell’s Thrushes will probably start singing and calling very soon”, I whisper to them. I am pretty confident that we will at least hear them because we are in an area where this secretive species is usually detected in large numbers during our annual spring Mountain BirdWatch surveys.

I ask myself: “Were they able to make it back to their breeding grounds?” I don’t want to disappoint my technicians, as it’s their first opportunity to see or hear this rare bird.

Suddenly, emerging from the dark, three Bicknell’s Thrushes start singing and calling to each other. Hooray! As their dusk concert resonates in the forest, I see my technicians’ eyes glow. What a very special show we are witnessing! These birds become active just before sunset and they move a lot, making it difficult to track which individual is which and how many there are. These mysterious birds have a special social structure compared to other territorial songbirds: they live together in clusters, usually with two or three males for one female. 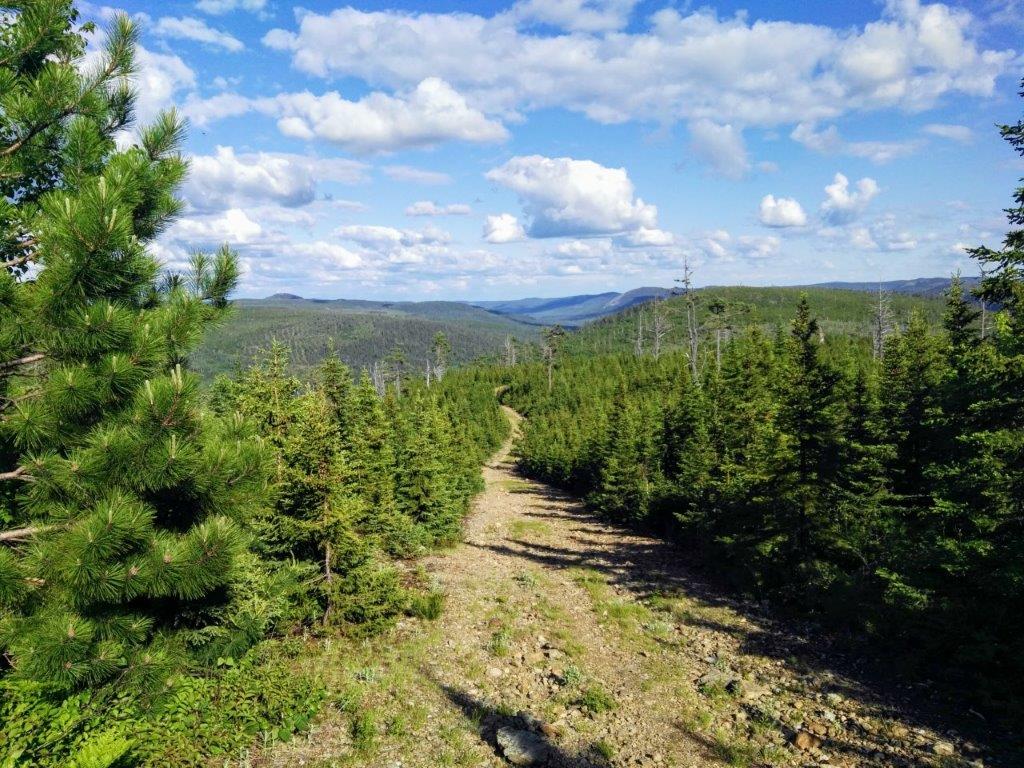 Mountain landscape in northern New Brunswick, one of the 30 new sites surveyed in 2021. Photo: Rémi Torrenta

During the 2021 field season in northern New Brunswick, our goals were to find new individuals or clusters on isolated mountaintops that had never been surveyed before, and to run our traditional Mountain BirdWatch monitoring surveys (surveys we’ve been running for more than 20 years in order to assess long-term trends for high-elevation forest birds). The purpose of the new surveys was to allow us to better estimate the distribution of Bicknell’s Thrush in New Brunswick, and form a better understanding of which vegetation structures they are using.

The problem is that detecting this species is quite tricky! To overcome this, we have to use an additional strategy to complement surveys that involve people going out into the forests. Namely, we deploy Automated Recording Units, small devices that can record the sounds of the forest (see photo). After at least six days of good weather, we retrieve the devices and process the audio files using acoustic analysis software. It is tedious to analyze and listen to the recordings, looking for Bicknell’s Thrush songs or calls, but we always find nice surprises – like a moose urinating or an owl hooting close by!

As part of this new project, we visited 30 previously unsurveyed sites in managed forests, both on public and private lands, and deployed 23 recording devices in those sites. Thanks to this work, we were able to detect 10 new clusters of Bicknell’s Thrush and at least 18 new individuals in high elevation forests of northern New Brunswick! We were pleasantly surprised by these results because we had detected only a single individual when we used a different survey method at those sites (human surveyor using audio recording “playback” to elicit a response from the species). This one individual that we detected was right underneath a wind turbine – yet another source of human disturbance Bicknell’s Thrushes have to contend with on their natural habitat!

These analyses had two outcomes. First, they confirmed that on-site silent surveys or surveys using playback are often not sufficient to be certain if the Bicknell’s Thrush is present or absent. Hence, recording devices are crucial to properly monitoring this Threatened species (and this is the only method we have been using recently in Cape Breton, Nova Scotia, where populations have suffered from fast declines in recent years). 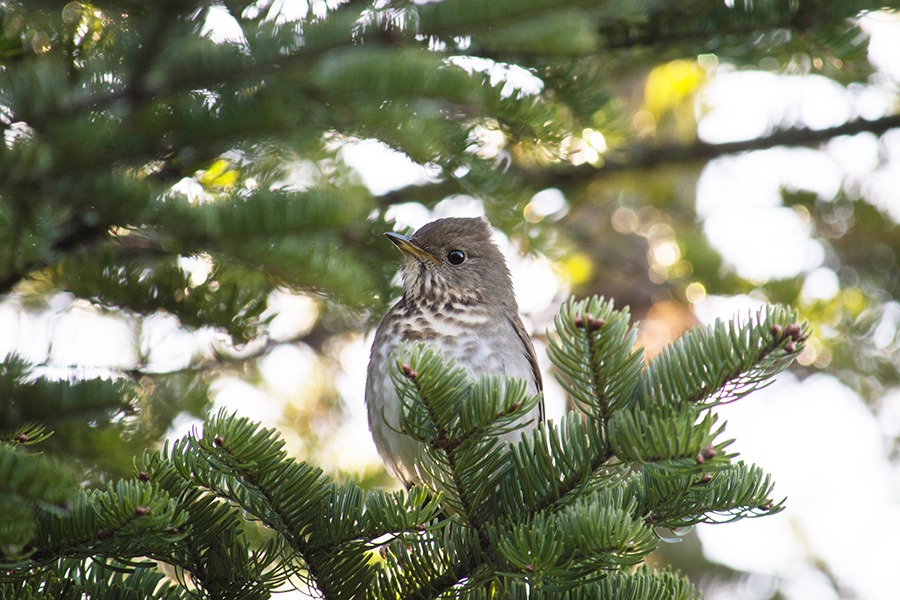 And second, some of our new detections of Bicknell’s Thrush were in older, mature forests, on private lands where mountaintops have recently been left undisturbed. These new detections may be evidence that Bicknell’s Thrushes in New Brunswick are not restricted only to young forests, as widely presumed. It is true that, in this province, the species is found mostly in dense, regenerating spruce or fir stands in managed forests on Crown lands (for example, after clearcuts). However, forests in this region have been intensively managed for so long (almost three decades) that even if the birds would prefer to live in forests undisturbed by forestry operations, that choice is seldom available to them. More research is needed to clarify at which point of forest maturity the Bicknell’s Thrush may stop using a stand, and whether the species is found in mostly young, regenerating forests only because that is the best option available to them in heavily managed landscapes.

We also detected one Bicknell’s Thrush at the top of Mount Carleton, the highest summit of the Maritime provinces, which is located in a provincial park. Although the species has been detected at the exact same location in past years, this is good news! It means the species hasn’t disappeared from the park yet, as it has in many other areas. And it’s good for the species that this park remains as one of the last undisturbed old forests in the province.

While we keep surveying and monitoring the Bicknell’s Thrush and other high elevation forest birds, we are also focusing conservation efforts on protecting them and their breeding habitat from direct disturbance. This year, we applied for a new Candidate Protected Area in order to protect the “mega-patch” where most of the New Brunswick population is concentrated. We also negotiated new agreements with forestry companies to prevent direct mortality and allow long-term protection of some forest blocks. 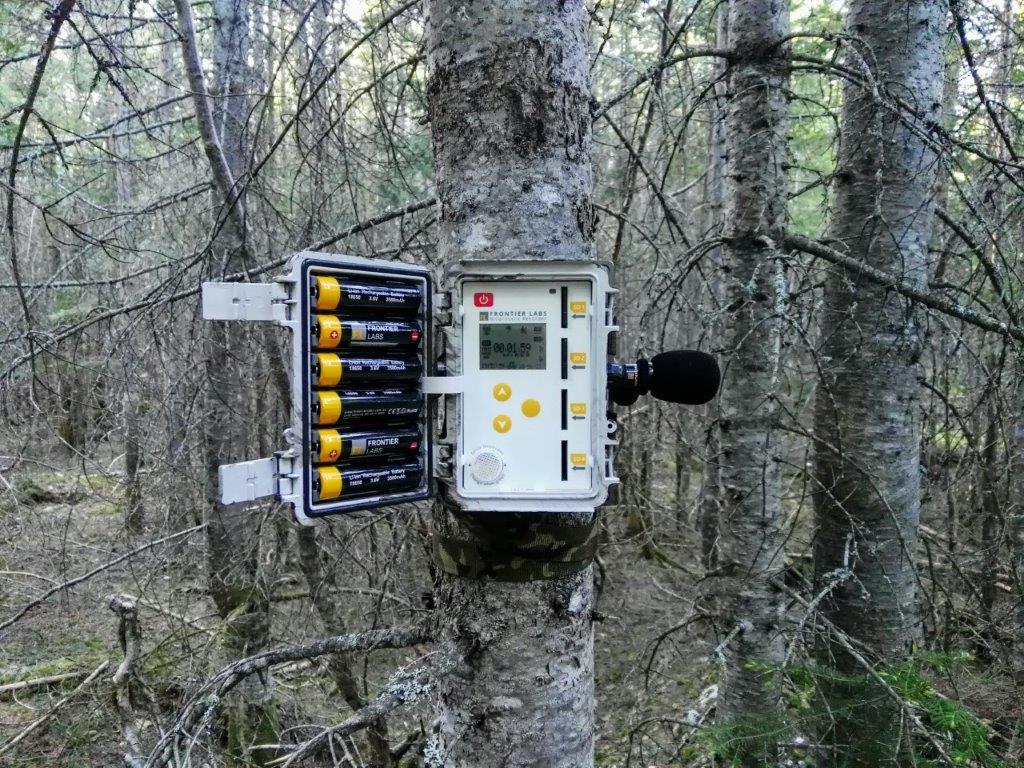 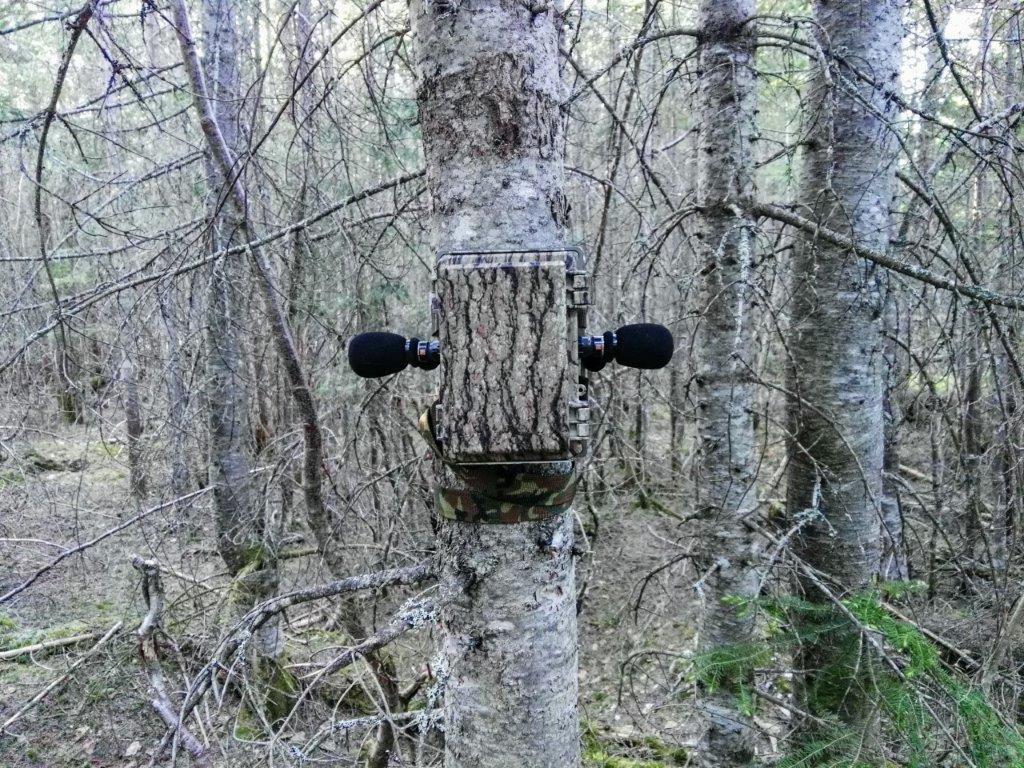 The device is well camouflaged in the forest. Photo: Rémi Torrenta

As we work with the province and industry towards conservation goals, many unknowns remain about this mysterious bird. For example, how are all these population clusters on different mountains connected to each other through dispersal? Thanks to our discovery of new population clusters and our investment at Birds Canada to continue working to monitor and preserve these areas, I have some hope that the Bicknell’s Thrush song will still be resonating in our forests in the decades to come.