It was just after dawn on March 19, 2015, in a cloudy rainforest on El Quinini mountain in eastern Colombia. Biologist Ana Maria Gonzalez gently untangled a Swainson’s Thrush from a dewy mist net and placed an identification band on its right leg. Before releasing the bird, she carefully attached a tiny radio-transmitter onto the thrush’s back. This specialized tag would send unique signals to a nearby receiver. Ana opened her hands and watched as her bird flew away. This small songbird’s subsequent journey from Colombia to Canada would astound Ana and bird experts the world over. 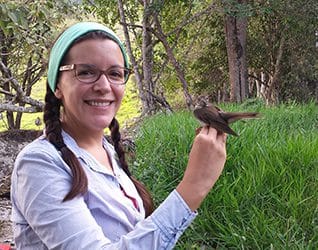 The Colombian research station where Ana conducts critical research for birds is a modest camp in a shade-grown coffee plantation called La Fragua. The area is widely recognized for its rich diversity and abundance of endemic species. Home to hundreds of tropical bird species, the region also supports migrant thrushes, warblers, and other songbirds from North America. The Colombian Andean Mountains are key over-wintering habitats and vital stepping stones for birds migrating from Canada throughout the Americas. Identifying and conserving this lifeline of bird-rich habitats are the most important things we can do to conserve declining migratory birds. We still have so much to learn.
The story of Ana and the thrush is a remarkable one. A native of Colombia, Ana is a Ph.D. researcher at the University of Saskatchewan. Birds Canada helped sponsor her work on the decline of the Canada Warbler, a threatened species. Banding birds in Colombia during the Canadian winter, Ana could not imagine the excitement she and her radio-tagged thrush would generate.
The radio-tracking signals revealed that Ana’s thrush left La Fragua on April 14. On May 18, it was detected by a small array of radio-receivers hosted by the University of Saskatchewan and Environment Canada at Chaplin Lake, SK. The thrush made an incredible journey of nearly 6000 km in just 34 days, flying at least 175 km per day for a month! This was the first time researchers could document this amazing migration in such detail. Since then, our specialized tracking system has been telling us similar stories about other radio-tagged birds.
Because of supporters like you, we are taking conservation science to the next level – understanding precisely where our birds migrate, as well as where, when, and for how long they stop to rest and feed along their way. We are excited to be on the cusp of tracking these birds in real time! 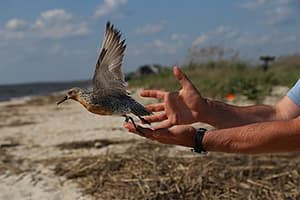 As you likely know, Birds Canada began as and still operates the Long Point Bird Observatory (LPBO). Using traditional bird banding techniques, we’ve been monitoring bird migration since 1960. It’s humbling to reflect on the changes in conservation science over the past six decades. Soon, we will band our one-millionth bird at LPBO! We deeply appreciate your involvement in our history, and our future. Thank you for joining us as we advance bird conservation, both with proven traditional methods, and the state-of-the-art approaches we continue to develop.
The receiving stations in Colombia and Saskatchewan are part of a network of over 300 across Canada, the United States, Central America, and northern South America. The Motus Wildlife Tracking System (“Motus” is Latin for movement) is revolutionizing our understanding of migration, including for threatened species such as the Piping Plover, Red Knot, and Bank Swallow. Rapid expansion and groundbreaking discoveries make Motus a tremendously exciting and innovative wildlife tracking system! Never before have we had the ability to track even the smallest songbirds with such precision. This knowledge will be a game-changer for conservation, and you are a part of it.

The concept is simple. Each Motus “nano-tag” transmits a unique radio signal. VHF antennae capture the signals. Birds Canada manages the enormous central database. The system’s accessibility (using relatively inexpensive tags and receivers that are easy to deploy and maintain) creates opportunities for broad participation. Universities, schools, and nature clubs could play an important role in bird conservation by hosting a Motus station, helping us complete the array of receivers throughout the continent.
With your financial support and the collaboration of many partners, Birds Canada aims to track 50 of Canada’s most threatened bird species by 2020. We’ve already tracked 27 species through the Motus network! Please make your year-end donation to Birds Canada today to help us reach this vital goal for birds.
It might surprise you to discover how much mystery still surrounds the details of songbird movements. Motus research is fundamentally changing our knowledge of bird migration, locally and throughout the hemisphere, including our understanding of what we need to do to conserve threatened species. Birds Canada is proud to serve as the hub of this growing network, reaching across the hemisphere and eventually going global. We thank you for your support. With the gift you make today, we can achieve our major goals for birds, and expand the Motus network to track 50 at-risk bird species by 2020.
We must expand Motus to fulfill our vision to track and conserve all Canadian birds. We need to deploy more receivers, to cover regions we’ve yet to target and to fill gaps where we’ve just begun. For example, we’ve yet to establish receivers in Mexico, the Caribbean, and most of the western flyways. With a completed array of receivers, researchers will understand more precisely where birds are stopping for rest as they migrate thousands of kilometres. Knowing where our birds stop will help direct land conservation priorities along our hemisphere’s flyways. At a localized scale, Motus can even tell us when birds are sleeping or foraging. Your generous donations in the past have helped get us this far. You can help us finish the Motus network, to track and conserve 50 of Canada’s most threatened bird species by 2020.

Already, Motus research into bird movements in the Western Hemisphere is uncovering critical information to guide conservation. Over the last two years alone, several bird species have been radio-tracked during their continental migrations. The results? Valuable insights into the migratory flights of birds and their habitat use at wintering and migratory stopover locations. For example:

Our Motus program is growing quickly, and generating exciting results, thanks to the enthusiastic involvement of many research partners. Birds Canada’s conservation efforts are directed by science, and tracking priority species is an important step toward setting informed goals. As you may have seen, we’re also developing innovative conservation solutions for grassland species,  and for aerial insectivores such as swifts and swallows. We’re recovering seabird populations off the west coast. And our Citizen Science programs empower over 40,000 volunteers to contribute their valuable bird observations, to help us monitor the health of Canada’s bird populations. Like many of our donors and members, you likely contribute your time as well. Thank you for all you do for birds.
The future holds unimaginable revelations. Smart technology is helping us learn more about migrating birds, and collect the vital information we need to protect them. Researchers like Ana can trigger new discoveries to inform where, when, and how much habitat to conserve for threatened birds. Motus is a practical new tool unlocking the door to much-needed answers and solutions. Please help us solve the mysteries of bird migration, and be Canada’s Voice for Birds – with a gift to Birds Canada today.
For our birds,