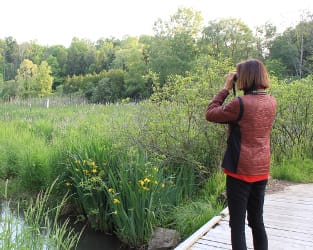 In 2018, Bird Studies Canada’s Great Lakes Marsh Monitoring Program (GLMMP) celebrated something remarkable: the completion of nearly a quarter-century of bird, frog, and habitat surveys by hundreds of volunteer Citizen Scientists. These dedicated individuals swarmed marshes throughout the Great Lakes to survey frogs and count elusive bird species like American Bittern (also called a “thunder-pumper,” for its loud calls) and American Coot (“mud-hen,” for its habitat and shape).
Numerous recent accomplishments by the GLMMP are summarized in the latest issue of the program’s newsletter, The Marsh Monitor.
Bird Studies Canada staff work hard to package the GLMMP data you contribute into creative science products, which lead to on-the-ground conservation of wetlands for wildlife and people. Examples of these valuable products include:

The recent newsletter also reports the latest population trends for nearly 30 species of marsh birds and frogs, with illustrations showing the fascinating ups and downs over the years and across the decades. The GLMMP is a truly unique treasure trove of information on the populations and habitats of these little-known species.
Although the past year has been laden with exciting accomplishments, we thought it would be revealing to report here on the collective milestones of the program over its entire 24 years. Remarkably, the GLMMP has produced 6 popular reports for the public, which are based on 11 peer-reviewed scientific manuscripts. It has also logged around 37,000 bird surveys and 49,000 frog surveys, with a total of about 382,000 species occurrence records of 314 species. But perhaps most importantly, the GLMMP has engaged over 1500 volunteer Citizen Scientists, who have learned first-hand a great deal about the importance of wetland conservation.
We hope that you are impressed by the impact of the work of our valued GLMMP volunteer Citizen Scientists and their hard-earned data. We hope you will consider going even further, perhaps by doing one or more of the following: