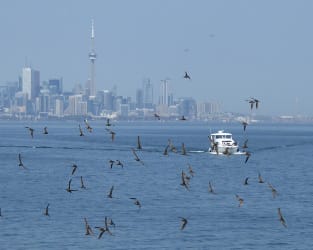 Thank you to the thousands of people who came out to the Toronto Bird Celebration from May 12-27. With over 40 events taking place across the Greater Toronto Area, this year’s celebration set the scene for plenty of memorable moments.
On May 12, over 2700 participants flocked to special events at Rouge National Urban Park, the Toronto Zoo, Tommy Thompson Park, and other destinations to mark World Migratory Bird Day.
Later that same week, 50 people were treated to phenomenal views of about 600 Chimney Swifts descending into the chimney at Moss Park Armoury at a “Swift Night Out” event led by Bird Studies Canada’s Liz Purves.
A screening of “The Big Year” on May 22 drew a crowd of over 40 viewers, many of whom were non-birders (or at least, not birders yet!). The film sparked excellent questions about the world of birding during a Q & A with Bird Studies Canada’s President Steven Price and Toronto Bird Celebration Coordinator Stacey Lee Kerr.
A wonderful story from the celebration came to us from Lynn Pady, who stopped in at the Toronto Ornithological Club’s Whimbrel Watch:
“They smashed the record for the entire 10 years that the ‘watch’ has been going on. Over 4000 Whimbrel passed by the point during the day. Remarkably, about 2000 were around from 2:30, when I arrived, until 4:00. At that point, the lines and flocks and big groups that were littering the sky and sitting down below us on the rocks somehow heard the clarion call and TOGETHER vanished to the north – not a single one was seen or heard again … To say the group of us who were gazing at this staggering sight and magnificent sound were overwhelmed would be putting it mildly. You really couldn’t do anything but just stand in awe and bear witness.”
Stacey Lee Kerr took charge of coordinating the celebration on behalf of Bird Studies Canada this year. After the whirlwind two weeks drew to a close, she reflected:
“Becoming better acquainted with local biodiversity provides a richness to the experience of walking down your street to which nothing else can compare. For instance, the feeling of awe when you learn that the birdsong you can hear in your local park is from a migrating warbler species that is just passing through, and that a week or two from when you meet them, they’ll be breeding hundreds of miles north in the boreal forest. There are so many different ways to connect with birds and local biodiversity, and the Toronto Bird Celebration, through its amazing partners, provides avenues to explore these connections in fun, meaningful ways.”
We would like to thank those partners for joining with us to bring the celebration to life: Birds & Beans Coffee Roasters, Citizens Concerned About the Future of the Etobicoke Waterfront, City of Toronto, Downsview Park, Drake Commissary, Fatal Light Awareness Program, Friends of Allan Gardens, Friends of Sam Smith, High Park Nature Centre, Humber Arboretum, Ontario BioBlitz, Our Place Initiative, Parks Canada: Rouge National Urban Park, Pickering Public Library, Rexdale STEM Club, Royal Ontario Museum, Thorncliffe Park Women’s Committee, Toronto Ornithological Club, Toronto Parks, Forestry and Recreation, Toronto and Region Conservation Authority, Toronto Zoo, and Wild Birds Unlimited.
We would also like to acknowledge the generous support of TD Friends of the Environment Foundation and The W. Garfield Weston Foundation, without whom the 2018 Toronto Bird Celebration would not have been possible.