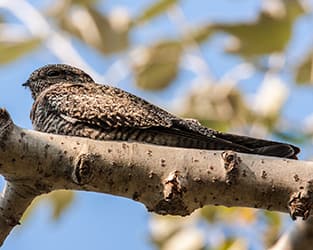 ’Tis the season to embrace the spooky things in life! That includes the thrilling, weird, and wonderful things about some of our favourite birds. We hope you’ve had the chance to encounter some of these species while out on birding adventures, volunteering for a Bird Studies Canada Citizen Science program, or just going about your daily routine.
1. Common Loon: The Common Loon’s call is often described as “eerie” or “haunting.” We know that Bird Studies Canada’s Canadian Lakes Loon Survey volunteers like this sound! Many thanks to all loon surveyors for another great survey season.
2. Northern Saw-whet Owl: The Northern Saw-whet Owl is nocturnal and rarely seen. Researchers are still unravelling many of its mysteries. Five hundred and ninety-nine of the Northern Saw-whet Owls banded at Long Point Bird Observatory have later been found elsewhere – some as far away as Alabama and Saskatchewan!
3. Mourning Dove: You may hear them in the morning, but “Mourning” Doves are actually named for their sorrowful songs. This melancholy bird is one of the most widely-reported species among Project FeederWatch participants in Eastern Canada.
4. American Crow: Some people find huge communal crow roosts a spooky sight – maybe because a group of crows is called a “murder”! American Crows were reported in greater numbers than any other species in Canada during last year’s Christmas Bird Count.
5. Newfoundland Gray-Cheeked Thrush: The Newfoundland subspecies of Gray-cheeked Thrush is elusive and declining. Scientists are trying to solve the mystery of its disappearance. You can read about this fascinating research in the fall issue of our magazine BirdWatch Canada.
6. Great Horned Owl: The Great Horned Owl is a silent, awesome hunter, capable of killing prey from scorpions to porcupines with its strong talons! This species is widespread across North America. Will you find one on the 2018 Nocturnal Owl Survey?
7. Common Nighthawk: The Common Nighthawk’s short bill opens to reveal a mouth of startlingly vast proportions, which it uses to scoop insects from the air. Bird Studies Canada is involved in efforts to find out more about this little-known species.
8. Franklin’s Gull: Gulls in general are tough and resourceful, to be sure – but less spooky in life than in Alfred Hitchcock’s The Birds! Unusually for the season, a Franklin’s Gull was spotted in Lethbridge, AB during the last Christmas Bird Count.
9. Common Yellowthroat: Why is the Common Yellowthroat on a “spooky” birds list? Because it wears a mask and cries “witchety witchety witch!” This little bandit is a common warbler across Canada. Over 15,800 have been banded at Long Point Observatory since 1960.
10. Loggerhead Shrike: The Loggerhead Shrike impales its prey on thorns and spikes. Pretty cool, unless you happen to be the prey. Bird Studies Canada is working with partners to conserve grassland birds at risk, including this species.
11. Chimney Swift: It might be spooky at first to discover Chimney Swifts in your chimney! But these helpful insect eaters are great to have around. You can help this unusual species at risk by volunteering for SwiftWatch.
12. Baltimore Oriole: You might not see many Baltimore Orioles in Canada this time of year, but their plumage is perfectly on theme! Will you find one of these birds in 2018 during a Great Canadian Birdathon, Schoolyard Bird Blitz, or NestWatch monitoring?
13. Common Raven: The Common Raven is notoriously spooky, thanks to Poe’s famous poem. But “savvy” is probably a better word for this smart bird! This species is bound to be on the Christmas Bird Count checklist for many Canadians. Stay tuned for the Christmas Bird Count season!