Thick-billed Longspur – an icon for change in the Canadian Prairies

Scattered across pockets of remaining habitat in southern Alberta and Saskatchewan, you can find one of Canada’s truly outstanding bird species – the Thick-billed Longspur. Doing so has become much harder over the past couple of decades. But for those who put in the effort, the reward is one of the most wonderful aerial song displays of any Canadian bird. And yes, the authors speak from experience, as we have both spent a lot of time in this part of Canada and have been captivated by this amazing species.

During the spring and summer, male Thick-billed Longspurs are a striking pale silver with black chests, a bold chestnut wing bar, and solid black beaks. Females and immatures are similar but are subtler in pattern and colouration. Thick-billed Longspurs tend to arrive on the Canadian Prairies as early as mid-April. Like many other prairie songbirds, they use aerial display flights and songs to establish territory and to attract mates. And for species that live in an essentially flat and treeless landscape, this strategy makes total sense.

Simply put, the display of the Thick-billed Longspur is beautiful. It starts with the males ascending to around 10m off the ground. They then proceed with their fast, soft, and cheerful warbling song that is punctuated by short pauses. As they fly, they undulate up and down until they conclude with a dramatic, slow glide down with wings held back in a V-shape, alighting on the prairie with chest puffed out and gleaming white and black tails flared for maximum show-offness. It is performance art of the highest order.

While watching these birds on their nesting grounds, you are hit with a sense of awe for how scenic, active, and diverse these short-grass prairie landscapes are. They are the furthest thing from flat and dull. They are a stage for a wide array of incredible, disappearing birds and wildlife. These are the landscapes that Thick-billed Longspurs inhabit during the summer months, in southeastern Alberta, southwestern Saskatchewan and neighboring states to the south (primarily Montana and Wyoming). The winter range is mostly in western Texas and bounded by northern Mexico to the south. Not a lot is known about their migratory behaviour.

Click on this image to listen to the song and see the preferred prairie habitat of the Thick-billed Longspur. Video: Jody Allair

For all its remarkable traits, the Thick-billed Longspur’s current claim to fame is being the focal point of a discussion on bird names – specifically, bird names that refer to people.

Many people in the North American ornithology and birding communities are urging the American Ornithological Society (AOS) to change the names of birds that are currently named after people, replacing them, for example, with names that are more descriptive of the bird. Many consider some of these bird names to be hurtful, and worry they are making the birding and ornithological communities unwelcoming to newcomers. Of greatest concern are names associated with racist or otherwise harmful legacies. However, to simplify the decision-making process, some proponents of the changes suggest changing all names that include a person’s name.

The first new English common name for a bird species to be introduced by the AOS for this reason was that of the Thick-billed Longspur. The name was changed from “McCown’s Longspur” in order to remove the reference to John P. McCown. McCown’s contributions as a naturalist are overshadowed by his actions during the U.S. Civil War, during which he defended slavery and fought Indigenous tribes as a general in the Confederate Army.

The name change to Thick-billed Longspur (note: unfortunately, the French name has yet to be formally changed by the AOS) was a watershed moment for the movement to update bird names. Our hope is that this will represent the first domino to fall, with more changes in the coming months. To learn more about this issue check out the Bird Names for Birds website, and watch the April 2021 AOS Community Congress on Common Bird Names: https://youtu.be/84GchnXInb8.

A female Thick-billed Longspur might be one of the most cryptic and non-descript birds in our prairies. Photo: Yousif Attia

It was partially in recognition of this moment that Birds Canada chose the Thick-billed Longspur to feature on our 2021 Great Canadian Birdathon shirt. We selected it because it is a remarkable western Canadian species, and because it symbolizes our support for the birding community becoming more welcoming and inclusive.

Unfortunately, this unique species and meaningful icon is on the decline. Thick-billed Longspurs prefer heavily grazed native grass and have suffered the effects of habitat loss to agriculture, development, use of insecticides, restriction of grass fires, and the loss of bison on the landscape. Recent studies suggest that grazing of domestic cattle on grasslands emulates the historical effects of bison, and improves habitat for Thick-billed Longspurs and other shortgrass specialists.

Thick-billed Longspurs spend most of their time crouched low to the ground while they forage for insects and seeds. Photo: Yousif Attia

The Thick-billed Longspur population in Canada has declined by approximately 98% since 1970! This species has been designated as “Threatened” in Canada and is protected by the Species at Risk Act and the Migratory Birds Convention Act.

Your chances of seeing the Thick-billed Longspur are getting scarcer, but we recommend you try to experience this amazing prairie songster in person, if and when you can. We also encourage you to learn more about the threats to the Canadian Prairies, and how you can help make a difference for this and the many other wonderful birds of Canada’s short-grass prairies. 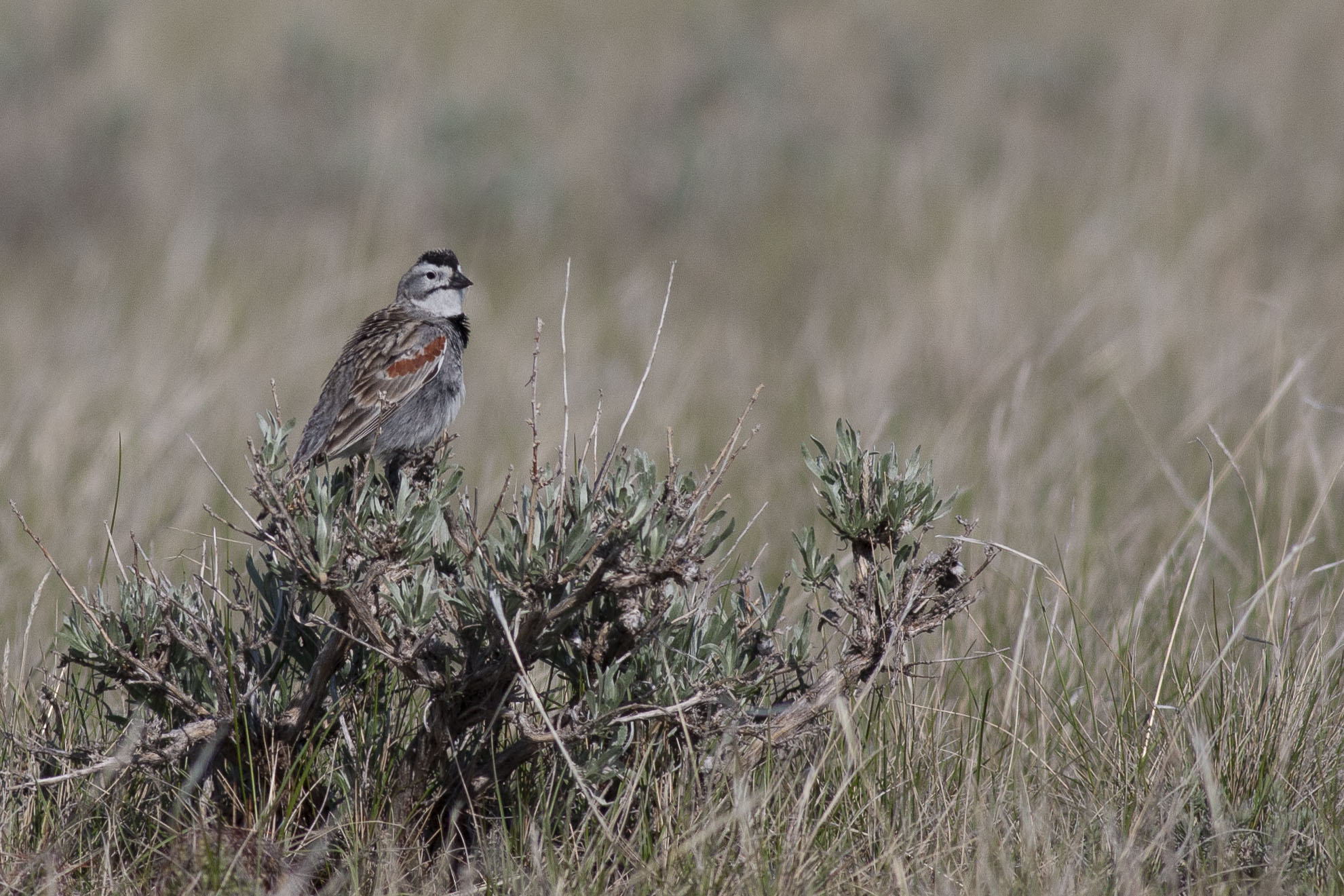