The State of North America’s Birds

Conservation Across Borders
North America’s birds are experts at border-hopping. Millions of birds move among Canada, the U.S., and Mexico each year, and some 350 species share their distribution across two or more of the three countries. Border-hopping species also share habitats with resident (non-migratory) species at certain times of year, making their fates intertwined. Experts agree that coordinated conservation within the continent and beyond is necessary for the survival of all bird species.
But what do we actually know about the status of our birds? A new report, The State of North America’s Birds, has some answers. This report, developed by the North American Bird Conservation Initiative and built using data collected by tens of thousands of Citizen Scientists across North America, is a call to action to governments, private industry, and the public to come together to support a beloved shared resource: our migratory birds. This unprecedented, continent-wide analysis demonstrates the collective power of people to help us understand conservation needs – and to make conservation happen. The report comes on the eve of the 100th anniversary of the Migratory Birds Convention between Canada and the United States. Now, more than ever, investment is needed to conserve birds and habitats across borders.
Major Findings
Of the 1154 bird species that occur in North America, one third require urgent conservation action. In particular, birds that depend on oceans and tropical forests are most imperiled due to severe habitat threats, restricted ranges, and declining populations.
More than half of our seabirds are considered in crisis. They are threatened by ocean pollution, over-fishing, energy extraction, invasive species on islands that depredate nests, and climate change. Birds Canada is working with Birdlife International and other partners in the Pacific to eradicate invasive species from globally significant Important Bird and Biodiversity Areas.
More than half of Mexican tropical forest resident bird species are imperiled due to dramatic habitat loss. Because Canada’s familiar migratory songbirds (see Magnolia Warbler map for an example) use this same tropical forest habitat during our winter, the effects of deforestation in the south can be felt right across North America. Birds Canada is working across borders on a number of programs to improve outcomes for birds, e.g., the Motus Wildlife Tracking System; Canada Warbler Conservation Initiative; Latin American Training Program. 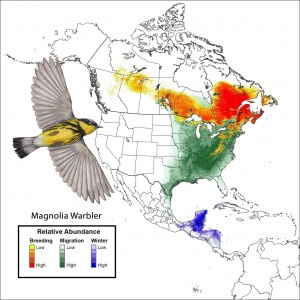 In winter, the entire population of Magnolia Warblers relies on an area of tropical forest only 1/10 the size of its boreal forest breeding range. This map is based on complex computer models, taking advantage of millions of Citizen Science records contributed to eBird. Birds Canada’s Andrew Couturier completed the dazzling cartography shown here.

Grassland birds are facing some of the steepest population declines of any group. The vast majority of our continent’s pre-settlement prairie has been converted to agriculture and residential development. As a result, grassland birds cling to fragmented remnants of their original habitats. Birds Canada is working with partners across North and South America, including the beef industry, to improve conditions for grassland birds.
It’s Not All Bad News
In spite of these alarming numbers, we know that when people push for positive change, bird conservation succeeds. One hundred years ago, passionate wildlife supporters encouraged national leaders to invest in bird conservation by signing the Migratory Bird Convention and putting an end to market hunting. Investments in wetlands have paid off, too, with most waterfowl species showing encouraging population trends. A comprehensive, renewed commitment to bird conservation could have a similar effect across all groups of bird species – there is good reason to be hopeful.
Ways You Can Help
The actions of individuals can have far-reaching positive impacts. Simple acts like choosing sustainably created products (such as grass-fed beef, certi­fied sustainable paper products, certified sustainable seafood, and bird-friendly coffee), preventing bird collisions with windows on our houses and office buildings, and participating in Birds Canada’s many Citizen Science programs can help. Taking care of key places for birds, such as Important Bird and Biodiversity Areas, is another concrete way to make a difference on the ground. See our list of top ways to help birds!
Learn More:
www.stateofthebirds.org
www.birdscanada.org