Eight more bird species are vying for the chance to represent North America in the Twitter World Cup of Birds. From June 12-24, you can vote in Twitter polls to determine which half will be eliminated and which half will join the four species that have already been selected to advance to the international playoffs.
To help select the final four North American champions, follow @BirdStudiesCan and the #TWC_Birds_NAmerica hashtag, and vote in the four remaining polls.
The Twitter World Cup of Birds (#TWC_Birds) is a friendly international competition hosted by the British Ornithologists’ Union. Its goal is to get people voting, tweeting, and learning about some of the world’s most remarkable birds – many of which are species of conservation concern.
To help you decide which species to support, here are some fast facts about the eight remaining North American contenders (numbers 9-16):

If you missed our post on the first eight species in Round Two (numbers 1-8), you can go back and read it now. At the time of writing, Red-headed Woodpecker and Tufted Puffin have been voted in to the international rounds. Wood Thrush and Laysan Albatross have been eliminated.
Thank you for being part of the Twitter World Cup of Birds and for helping to shine a global spotlight on some truly amazing species! 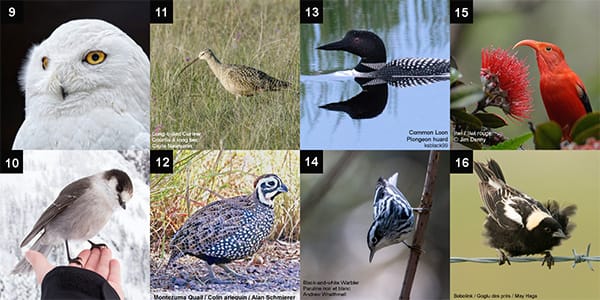