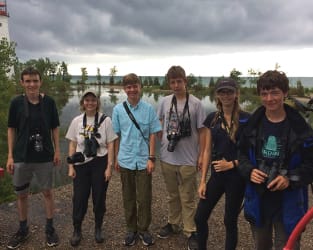 Bird Studies Canada and Long Point Bird Observatory hosted six talented young naturalists for the 2018 Doug Tarry Young Ornithologists’ Workshop (YOW). This year’s participants included Linden Imeson (Waterloo, ON), Isaac Nelson (Kamloops, BC), Bridget Spencer (Vancouver, BC), Erik Van Den Kieboom (Owen Sound, ON), Eva Visscher (St. Thomas, ON), and Christopher Zayachkowski (Sault Ste. Marie, ON).
An enthusiastic group, our budding ornithologists were keen to learn about bird banding and scientific monitoring techniques. They also enjoyed workshops and demonstrations on preparing specimens, field sketching, hummingbird banding, and identifying moths and other insects. All of the workshops were led by professional biologists eager to pass on their knowledge to the next generation of scientists.
As always, one of the highlights was the annual YOW Big Day, during which the workshop participants undertook to see as many bird species as possible in Ontario’s Long Point area in a single day. They racked up a grand total of 94 species, including a Carolinian forest specialty – the Prothonotary Warbler. Also gracing the list were many new lifers for the group, such as Prairie Warbler, Lesser Black-backed Gull, and many new eastern species for our participants from British Columbia. What a great way to wrap up the week!
Bird Studies Canada’s Young Ornithologist Workshop had its start in the 1970s. Thanks to the generosity and foresight of late naturalist Doug Tarry, it has operated continuously since 1994 as the Doug Tarry Young Ornithologists’ Workshop. His generous endowment fund has supported the participation of six young adults each year. To date, more than 150 participants have taken part, and many have carried their passion for birds and natural history through their education and careers in bird research and conservation, across Canada and abroad.
Many thanks to the staff and friends who helped deliver this year’s workshop, providing valuable experiences to a new cohort of champions for birds. Photos and highlights of the 2018 Young Ornithologist Workshop can be viewed on the Long Point Bird Observatory Facebook page or by searching the hashtags #LPBOYOW and #YOWBigDay on Twitter.
Do you know an enthusiastic young birder between the ages of 13 and 17? Learn more about the program and application process on the Long Point Bird Observatory website or email Kyle Cameron. Applications for the 2019 Young Ornithologists’ Workshop are due 30 April 2019. 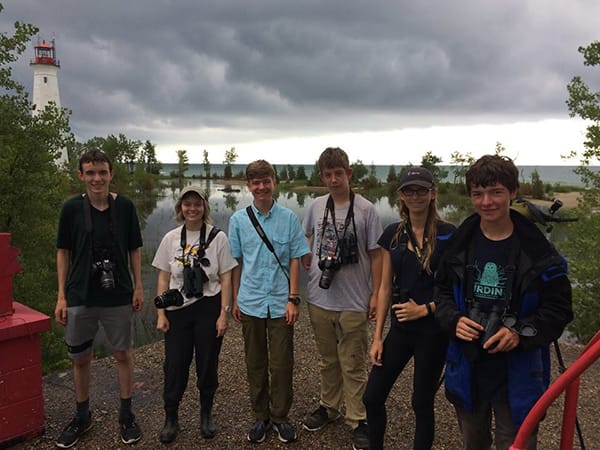