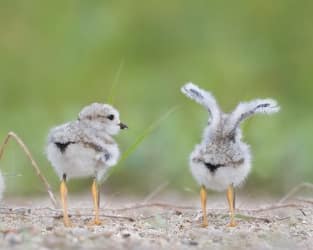 To some, spending countless hours from May through August protecting an endangered, camouflaged bird, its four eggs, and its flightless chicks on the open sand – exposed to the elements and busy activities of beachgoers – would sound daunting, and perhaps a bit nuts. I’ve come to learn that cautious optimism and resilience are handy qualities for biologists and Citizen Scientists engaged in Piping Plover conservation. Each spring, we plover lovers must prepare ourselves for the inevitable and (sadly) often numerous disappointments, such as nests being lost to predation, inundation during extreme high tides, or human activities, like all-terrain vehicle use. But the wonderful highs of the season get us through those tough times: the first arrival of Piping Plovers on Atlantic Canada’s beaches in April, a newly-occupied nesting beach, a passionate volunteer, a supportive landowner, the first nest and chicks of the year, or a family of four chicks surviving despite the odds.
Like many other seasons in the past, 2017 will be a season of ups and downs on Nova Scotia beaches. Piping Plovers along our northern shores, where about one-third of the province’s plovers breed, have had a strong year. There, plovers will surpass the annual reproductive target of 1.65 fledglings per pair for a second year in a row. In contrast, plovers on the province’s south shore will likely have another year of low breeding success. Nest failures in spring, caused largely by predation and flooding during high tides, as well as low chick survival in June, have been setbacks. Many plover pairs have initiated second or third nest attempts, but they must still evade predators, high tides, storms, and humans. If nests are lost now, time has run out to lay a new clutch of eggs. And females have another thing on their minds: migration! In fact, some females have already left the breeding grounds on their way to wintering grounds in the southeastern U.S. and Caribbean. Note to self: time to channel that cautious optimism! There’s still a chance that the remaining nests will hatch and the majority of those chicks will survive to turn around a bleak-looking breeding season.
Yes, these ups and downs are draining, but talk to anyone who has been involved with plover conservation here in Atlantic Canada or elsewhere, and the failures won’t be the first thing they talk about. You’ll hear inspiring stories about plovers surviving the odds or people stepping up and making a difference to reduce threats. We know there’s a long road ahead to recover this little endangered shorebird, but we plover guardians are proven survivors.
To learn more, please visit Bird Studies Canada’s New Brunswick and Nova Scotia Piping Plover Conservation Program webpage.