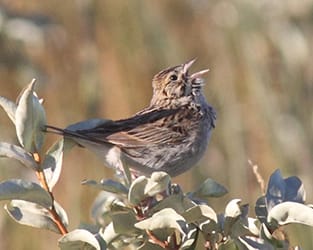 This month in the grasslands of southwestern Manitoba, Bird Studies Canada will be conducting surveys for grassland species at risk, including Ferruginous Hawk, Loggerhead Shrike, Sprague’s Pipit, Chestnut-collared Longspur, Baird’s Sparrow, and Bobolink. These surveys are part of a large collaboration under Environment and Climate Change Canada’s SARPAL program (Species At Risk Partnership on Agricultural Land). Bird Studies Canada is partnering with the Manitoba Beef Producers, Manitoba Habitat Heritage Corporation, West Souris River Conservation District, Turtle Mountain Conservation District, and Nature Manitoba.
This project offers incentives to beef producers to enhance the habitat on their pastures for species at risk. These incentives will include fencing that supports improved grazing; watering systems designed to improve cattle distribution; management of woody, invasive plants encroaching on grasslands; and the establishment of additional pastures.
As the bird-monitoring expert in this collaboration, Bird Studies Canada will document the occurrence of species at risk on enrolled private properties and advise on the site-specific details of how incentives are delivered, with reference to the particular suite of species found on each site.
With the vast majority of native mixed-grass prairie in Manitoba (and elsewhere) occurring on private lands, and with the current market pressures for cattle ranchers to convert to other forms of agriculture, which would see valuable grasslands destroyed, this form of collaboration is essential for some of Canada’s most threatened species.
As noted in the State of Canada’s Birds report, grassland birds have declined in Canada by 40% on average since the 1970s. The Baird’s Sparrow, for example, has lost thousands of square kilometres of its range in Manitoba, and is now confined to a mere handful of sites, mostly within the Southwest Mixed-grass Prairie Important Bird and Biodiversity Area.
The situation for these species is dire, but through the SARPAL program, the Canadian Roundtable on Sustainable Beef, and the Manitoba Grassland Bird Conservation Initiative, Bird Studies Canada and partners are uniting their efforts to prevent further population declines.