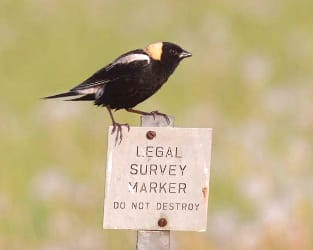 Bird Studies Canada has just completed another summer of surveys for grassland species at risk on private cattle ranches and provincial community pastures in Manitoba. We recorded over 500 sightings of species at risk, including Ferruginous Hawk, Loggerhead Shrike, Sprague’s Pipit, Chestnut-collared Longspur, Baird’s Sparrow, and Bobolink.
These surveys are used to inform a “Keep Grazing” incentive program for beef producers. This program has many partners and is funded by the federal government’s Species at Risk Partnership on Agricultural Land program. Incentives can include management of encroachment of shrubs and invasive species into grassland, fencing to support improved grazing, and watering systems that reduce pressure on sensitive habitats.
We have now surveyed 60 properties in southwest Manitoba and advised on projects that can improve habitat for key grassland species at risk, some of which were only found in small areas within certain properties. We have also installed nesting poles for the Threatened Ferruginous Hawk, especially in areas where former nests were blown down by high winds.
We are also working within the provincial Range Implementation and Management Group that provides guidance to the Association of Manitoba Community Pastures. Our bird surveys on community pastures over the past three years have provided invaluable information on where species at risk occur. Especially noteworthy are the combined community pastures of Ellice-Archie and Spy Hill-Ellice, near St-Lazare, Manitoba. Together, these pastures form the largest intact tract mixed-grass prairie in the province. There, we have documented an exceptional concentration of several hundred pairs of Sprague’s Pipits (Threatened) and Chestnut-collared Longspurs (federally Threatened, provincially Endangered), as well as over 20 Baird’s Sparrow (federally Special Concern, provincially Endangered) territories.
These species have lost as much as 90% of their populations since Breeding Bird Survey monitoring began, and their ranges have collapsed in Manitoba. Preserving large tracts of grassland, such as the Ellice-Archie and Spy Hill-Ellice community pastures, is doubtless essential to prevent their extirpation. We have therefore been advocating for long-term securement of these two vitally important pastures, especially given the looming threats of a proposed hydro-electric transmission line, oil and gas exploration, and potash mining. We have nominated these two pastures as an Important Bird and Biodiversity Area based on our survey results. After a letter-writing campaign, we presented to three provincial government ministries on this important issue and were part of a government tour to the pastures in June.
Bird Studies Canada also continues our role on the Canadian Roundtable for Sustainable Beef, working with agricultural partners to find the most effective means of food production that also support biodiversity conservation.
More than ever, it is essential that we come together to conserve native grasslands, our most endangered habitat type and an ecosystem in peril. This applies not just to the Great Plains, but also the eastern grasslands and our ongoing work with Bobolink and Eastern Meadowlark. This area is receiving renewed focus by the international conservation partnerships North American Bird Conservation Initiative and Partners in Flight. Grasslands will be the topic of a one-day symposium on 20 August at the International Ornithological Congress in Vancouver, and Bird Studies Canada will be ready to discuss key conservation issues with new audiences. Following that, the 12th Prairie Conservation and Endangered Species Conference will be held in Winnipeg in February of 2019. Bird Studies Canada is chairing the programming committee for this conference and reaching out broadly for interest and support.
We hope to see some of you in Vancouver this year and Manitoba next year. Above all, we welcome you to join the conversation of how we can feed our population well while keeping wildlife populations strong and healthy!