Stewardship for Species at Risk in Toronto 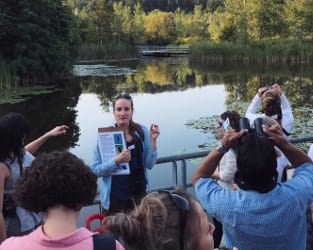 With support from the Government of Canada’s Habitat Stewardship Program (HSP) for Species at Risk, Bird Studies Canada is conducting targeted research and conservation for Chimney Swifts and Common Nighthawks in Toronto.
Both the Chimney Swift and Common Nighthawk are aerial insectivores, meaning they eat insects while in flight. This group of birds, which also includes the swallows, is experiencing faster population declines than any other in North America. As a result, many species, including our two target birds, are listed as “at risk” under federal and provincial legislation.
An interesting trait shared by Chimney Swifts and Common Nighthawks is that they often live in close proximity to people. The fact that these birds nest in or on houses and other human-made structures means that urban citizens and communities have an important role to play in their conservation.
As their name implies, Chimney Swifts nest and roost inside chimneys; hundreds to thousands of them can be seen spiraling into chimneys to rest overnight during spring and fall migration. Swifts can easily be spotted flying above cities and towns where open chimneys are available. Not surprisingly, Toronto boasts a large breeding population, though we still know relatively little about their habitat use in this city. With high rates of chimney loss due to redevelopment and heating upgrades, identifying and stewarding existing nest and roost sites will be key to keeping swifts in Toronto’s skies.
Common Nighthawks have one of the largest breeding ranges of any North American bird. They can be found across Canada breeding at low densities wherever they find suitable open-ground habitat. Because nighthawks will nest on flat gravel rooftops, in derelict parking lots, and in railway yards, they were once an iconic bird in Toronto. They used these sites at high densities until, in recent decades, a precipitous local decline became noticeable to birders across the city. The Toronto area might also be important to Common Nighthawks as a migratory staging area; Bird Studies Canada runs a monitoring effort in the fall to count the thousands of nighthawks moving across the city on their way to southern wintering grounds.
Through a new project entitled “The Neighbours Upstairs: Engaging Torontonians in Monitoring and Stewarding Aerial Insectivores,” Bird Studies Canada plans to learn more about how these two mysterious, at-risk species use Toronto’s landscapes while nesting and on migration, and to work with local landowners to conserve and monitor these birds and their habitats. As part of this effort, Bird Studies Canada’s Liz Purves and Emily Rondel recently led an interpretive walk focused on Common Nighthawks and Chimney Swifts at the Evergreen Brickworks in Toronto’s Don Valley, an important local habitat for many bird species. Stay tuned to find out about our next event in Toronto. There will be many more opportunities to learn how you can help Chimney Swifts and Common Nighthawks!