Small Gifts of Time go a Long Way for Birds Whether they’re visiting a feeder on your apartment window or checking out your crabapple tree, birds keep us amused with lively antics all winter. For 33 years, participants in a program called Project FeederWatch have been reporting quick counts of their feathered visitors throughout the colder months. Scientists then use these observations to bring to light important stories of what’s happening with North America’s winter bird populations.
“Over its long lifetime, the survey has shown the increasing good fortunes of birds such as Cooper’s Hawks,” says Kerrie Wilcox of Bird Studies Canada, Canadian Leader of Project FeederWatch. Results from FeederWatchers add to evidence that many birds of prey are recovering from population declines suffered in earlier decades. We have learned that certain hawks, including Cooper’s Hawks, are doing well even in some urban environments, where they have adapted to hunting city-dwelling prey as their original forest habitats have been replaced. Further research may illuminate what specific features we can enhance to make cities even better homes for the birds living there.
Project FeederWatch observations have also helped raise the alarm that some species are in decline. For example, FeederWatch participants have tracked decreasing numbers of Evening Grosbeaks and shrinkage of the geographic range they cover in North America. Detecting these patterns is the first step towards addressing the challenges faced by this species, which may include loss of nesting habitat and food sources.
Thank you to all those who have participated in Project FeederWatch over the past 33 years! By dedicating time and effort to this project, you have been making meaningful contributions to bird research and conservation.
How to join Project FeederWatch
You can contribute by watching feeders for as little as 15 minutes every few weeks and submitting your counts during Project FeederWatch season. The upcoming 2019-20 season runs from 9 November 2019 to 3 April 2020. Anyone can take part – current participants represent a wide range of ages and skill levels. FeederWatch makes an equally great learning experience for young families as it does a fun relaxation activity for the experienced birder.
In Canada, you can get involved by making a donation of any amount to Bird Studies Canada. Visit birdscanada.org/feederwatch or call 1-888-448-2473 to learn more and join. 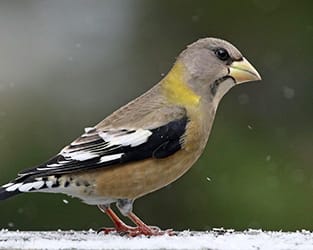 What you get
FeederWatchers in Canada will receive a poster of common feeder birds, a calendar, last season’s results, and access to online data tools. Those making a minimum donation of $50 can also choose to receive the quarterly magazine BirdWatch Canada, produced by Bird Studies Canada. You also have the option of participating in the online community at facebook.com/groups/feederwatchcanada or on Twitter @PFWCanada.
About Project FeederWatch
Project FeederWatch is a joint research and education project of Bird Studies Canada and the Cornell Lab of Ornithology. Armstrong Bird Food and Wild Birds Unlimited are national sponsors of Project FeederWatch in Canada.