Should I Make a Nesting Raft for Loons? 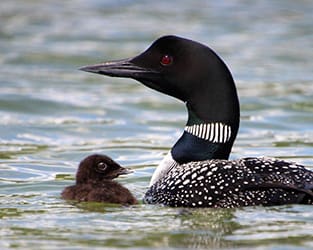 Many of us have fun watching Common Loons. In fact, over 700 dedicated Citizen Scientists do just that every year through the Canadian Lakes Loon Survey. Its participants have tracked the number of chicks produced by loon pairs for nearly 40 years, making the Loon Survey one of Bird Studies Canada’s longest-running programs.
Watching loons can have a wonderful side effect of increasing our desire to help them. But what is the best way to do that? Would building a nesting raft, or platform, benefit the loons at your lake? The results of loon research efforts, including the Loon Survey, have taught us a lot about what works and what doesn’t. Here we provide some advice to keep everyone on the straight and narrow (or should that be “on the strait and narrows?”).

Rafts can help, but only in certain situations
People like to fix problems – it’s part of our nature. So, when loon watchers observe nest failures, the “gut” response is often to intervene. Extensive research has shown that artificial nesting rafts (see photos below) can boost the number of chicks hatched on a given territory by increasing nest success, so people often want to set out rafts. But nesting rafts have a positive influence only in certain situations. If nesting rafts are used under the wrong circumstances or go without proper monitoring and maintenance, then the number of chicks produced can actually go down as a result.

Rafts sometimes create new problems
There are multiple ways in which nesting rafts can negatively impact the loons. One is that Common Loons prefer islands, including artificial nesting rafts, as nest sites. As such, rafts often lead to more territorial disputes. This can disrupt nesting pairs, reducing their ability to defend their nests and eggs from predation. Also, improper construction and maintenance or poor placement of rafts can cause unintended flooding of the nest. In these situations, chick production is lower than it would have been with no raft.

When should I use a nesting raft?
Use loon nesting rafts on territories currently or formerly occupied by loons only if:

Using loon nesting rafts outside these specific situations should be avoided. For instance, loon pairs on certain territories might be experiencing setbacks for reasons that have nothing to do with the nest. These reasons could include a shortage of food for the young once they are out of the nest or human disturbance to adult loons and mobile chicks leading to predation. Using nesting rafts in these situations would not help, and could have a negative effect. 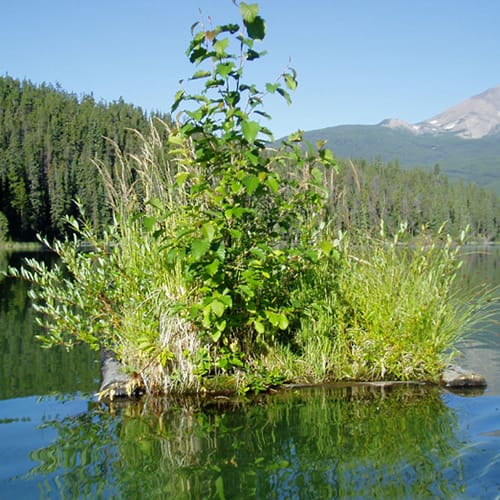 How to succeed with rafts
If it makes sense to use a raft in your situation, based on the above criteria, make sure that you:
1. Monitor your nest by participating in the Canadian Lakes Loon Survey. Follow the Loon Survey protocol before and after deploying nesting rafts to ensure suitable data are publically available to demonstrate that the raft is having the desired positive effect for nesting loons. If the raft isn’t having the desired positive effect, then it should be removed. You can find details on participating in the Loon Survey at birdscanada.org/loons.
2. Follow the accepted standards for construction, use, maintenance, and monitoring of Common Loon nesting rafts. Additional information can be found here.
3. Commit to maintaining and monitoring the raft over the long term. There are specific materials that need to be used and construction specifications that need to be followed. The rafts are heavy and difficult to move, and need to be taken out and stored over the winter. As well, they require inspection, and potentially maintenance, several times each nesting season. Get informed with all of the details before proceeding.

With the right team of people and under the right circumstances, a loon nesting raft can be a great conservation success. In the end, consulting a professional loon biologist to ensure all is in order is a good idea – for you, and especially for the loons.

What else can I do to help loons?
If using a raft is not a good option for your lake, you can still help loons. Check out Bird Studies Canada’s Top 6 Ways to Help Loons.

Need more information?
Call Kathy Jones at 1-888-448-2473, extension 124 or email her at volunteer@birdscanada.org. You can learn more about the Canadian Lakes Loon Survey at: birdscanada.org/loons.