Saving Ancient Murrelets from Invasive Species in BC 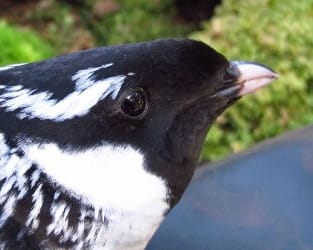 As their name suggests, invasive species ‘invade’ a new environment and cause a cascade of ecological changes, usually harmful, to resident species. The success of invaders comes from their ability to spread rapidly and outcompete the resident species, either directly through predation, or indirectly through competition for shared resources.
Since the 17th century, invasive species have caused 40% of all animal extinctions for which there is a known cause. Arguably, seabirds have been among the animals most impacted by invasive species, which are the single most important driver of bird extinctions worldwide. Invasive species have caused over half of the known bird extinctions since around 1500, and continue to impact at least one-third of the 1300 bird species globally threatened today.
This sad picture is especially acute on islands, where endemic birds that evolved in predator-free environments quite simply lack defences against predators. A good example of this is in the Pacific Ocean, which now has more threatened bird species per unit of land area, or per person, than any other region of the world – with 42 critically endangered bird species.
That’s the global picture, but how are island-breeding birds faring in Canada? Let’s look at the Ancient Murrelet as an example. These stunning black, white, and grey birds occur in an arc around the rim of the northern Pacific Ocean, from China in the western Pacific to Baja California in Mexico. Ancient Murrelets spend most of their lives at sea, coming to land only to breed in colonies on offshore islands. About half of the world’s breeding population, currently an estimated 256,000 pairs, nests on islands in Haida Gwaii in British Columbia; 44% breed at 17 colonies off the east coast of Moresby Island, and a further 50% nest at large colonies on Hippa Island, Frederick Island, and Langara Island.
Langara Island hosted an estimated breeding population of 200,000 pairs in the 1950s. Then rats invaded. Brought ashore by humans, the rats multiplied and spread over the 3000 hectare island and ate the adults, chicks, and eggs of many seabird species, the Ancient Murrelet included. By 1988, the murrelet colony size was reduced to only 24,000 pairs, and the populations of murrelets on nearby Cox and Lucy islands were abandoned by 1970.
In 1995, the Canadian Wildlife Service hatched a plan to eradicate rats from Langara Island using poison bait. This intensive program took several years and hundreds of hours, but was eventually successful. Follow-up surveys confirmed that rats were completely removed. Ancient Murrelets subsequently rebounded, and by 2004 the colony on Langara Island had returned to pre-rat eradication numbers of over 24,000 pairs. The impact of rats on Ancient Murrelets on Langara Island and the removal of those rats is just one of the many successful Invasive mammal eradication stories worldwide. Time will tell whether the murrelet colony on Langara Island will return to its historic numbers, but indications are looking positive.
Bird Studies Canada is involved in the fight against invasive species in BC, including on Langara Island. We do this by deploying remote cameras to detect mammal presence on remote offshore islands, and then sending out animal control teams when mammals are detected. We are also involved in building community awareness of the invasive species issue, preventative campaigns, and support for animal control measures when and where appropriate.
Stay tuned to Bird Studies Canada’s Featured News Stories blog for more on this story and others from the world of seabird conservation.