Safeguarding the Seabirds of Haida Gwaii 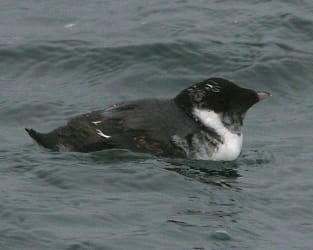 In mid-October, Bird Studies Canada’s B.C. program team convened, for the first time, all the key players on Haida Gwaii with expertise or responsibility pertaining to seabirds and the threats they face from introduced mammal predators. The group discussed biosecurity: the process of controlling or removing so-called “invasive” species, and ensuring that they do not reestablish, either naturally or by human reintroduction. This work is part of a coordinated effort with BirdLife International and partners to tackle the impacts of invasive species on birds across the Pacific, which is generously funded by the T/Gear Trust.
Haida Gwaii supports roughly 1.5 million nesting seabirds, including some of the world’s largest breeding colonies of Ancient Murrelets, Leach’s and Fork-tailed storm-petrels, and Rhinoceros Auklets. One of the biggest threats to seabirds that nest on islands around Haida Gwaii is invasive mammals like rats and raccoons. With nearly 35% of the archipelago of Haida Gwaii now within designated protected areas, addressing this threat is a high priority for the Council of the Haida Nation and the Province of British Columbia.
Many seabirds have evolved without the threat of invasive species, and have been unable to adapt to introduced predators – causing population-level impacts and, in some cases, extinction. In fact, more than half of all known bird extinctions since 1500 are attributable to invasive species.
Biosecurity is an essential process to maintain and protect remote island birds and ecosystems from invasive species. The term “biosecurity” might conjure images of HAZMAT suits, toxic sludge, and infectious diseases. These may be components of biosecurity in some regions, but on seabird colonies around Haida Gwaii, the term primarily refers to the long-term planning and implementation of strategies to restore habitats and remove the risk of accidental or deliberate introduction or reintroduction of invasive species.
Bird Studies Canada and partners at the Council of the Haida Nation, Parks Canada, the B.C. provincial government, the Canadian Wildlife Service, Laskeek Bay Conservation Society, and Island Conservation and Coastal Conservation discussed biosecurity at single-island and archipelago scales, and strategized about how to better coordinate our efforts.
The need for an archipelago-wide biosecurity strategy was echoed during Haida Gwaii Bird Day, held at the Haida Heritage Centre on October 14. At the event, members of the community learned about birds in Haida Culture and invasive species issues, and joined the biosecurity conversation during a panel discussion. Panel members included staff from the Council of the Haida Nation, Parks Canada, and Bird Studies Canada. The event was timely, coinciding with news that rats have reinvaded two islands in Gwaii Haanas that had been declared rat-free in 2013. Despite this devastating turn of events, panel members enthusiastically answered questions from a very engaged public, with a call to work together as a community to tackle this conservation challenge.
There is still much work to be done, but our visit reinforced the need for a collaborative effort throughout the archipelago. We will return later in November to discuss biosecurity for Langara Island IBA in northern Haida Gwaii, formerly home of the largest Ancient Murrelet colony in the world. Stay tuned to hear more about our progress, and watch this space for an article on Haida Gwaii Bird Day and further news from our partners at the Council of the Haida Nation.