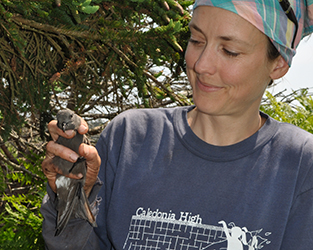 Completing my fifth annual pilgrimage to Baccalieu Island, NL, I spent one gloriously sunny week this July assisting Dr. April Hedd, Wildlife Biologist with Environment and Climate Change Canada, in studying Leach’s Storm-Petrels.
For most of their lives, Leach’s Storm-Petrels range widely over the Atlantic and Pacific oceans, feeding on small organisms at the water’s surface. To breed, they must return to land – a risky place for small birds to raise chicks. They nest at island colonies, in narrow burrows, which they fly in and out of only at night; this strategy helps them avoid being eaten by daytime predators. Breeding pairs raise just one chick per year. The young take a long time to hatch (40 days) and grow big enough to fledge (70 days). While growing in the burrow, chicks are left alone for three or four days at a time while the parents search for food at sea.
Although the Leach’s Storm-Petrel is the most abundant breeding seabird in Atlantic Canada, evidence from across its breeding range suggests populations of this furtive species are declining. It was recently assessed as ‘vulnerable’ on the IUCN Red List.
Baccalieu Island hosts the world’s largest Leach’s Storm-Petrel colony, which comprised over three million pairs according to an assessment in the 1980s. The island hefts its six-kilometre-long bulk of cliff, forest, fern, and meadow into the Northwest Atlantic Ocean off the northeast tip of Newfoundland’s Avalon Peninsula. It is just one site being studied in an Atlantic-wide investigation of the causes of Leach’s Storm-Petrel declines. This year’s work on Baccalieu Island included resurveying burrows to understand rates of return of marked individuals, retrieving tracking devices to understand at-sea movements, and sampling individuals for toxicology and genetics work.
Bird Studies Canada was recently awarded a three-year grant through the Government of Canada’s Atlantic Ecosystems Initiative Funding Program. The grant will support work with multiple collaborators to collect information at key petrel colonies in New Brunswick, Nova Scotia, and Newfoundland.