Researchers Working Together on a Leach’s Storm-Petrel Puzzle 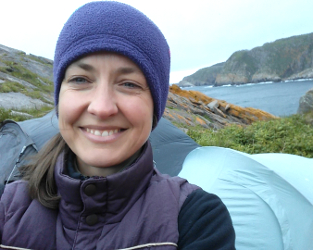 June is a special month for me, marking two important things. First is my daughter’s birthday. Then – immediately following – is my annual trip to Baccalieu Island, Newfoundland, where I study the declining Leach’s Storm-Petrel with my friend and colleague Dr. April Hedd.
Leach’s Storm-Petrels are found at colonies across the Northern Hemisphere and are one of the world’s most abundant seabirds. However, populations have declined by 30-50% at all breeding colonies where they are studied, including the world’s largest colony, at Baccalieu Island. In 2016, the International Union for the Conservation of Nature listed the Leach’s Storm-Petrel as Vulnerable, both reflecting and spurring increasing concern for the species.
In 2017, Bird Studies Canada acquired a three-year grant through the Atlantic Ecosystems Initiative to work with multiple collaborators on collecting information at key petrel colonies in the Atlantic region.  Our aim is to find out why the Leach’s Storm-Petrel is in decline. Threats to the species are multi-faceted and not well understood, but likely include predation at colonies, environmental contaminants (e.g., mercury), risks at sea (e.g., attraction/collision with vessels, flares from offshore petroleum development, and wind farms), and climate-driven changes in food supply. We also may be missing pieces of the overall picture because we don’t understand the constraints and demands on this bird throughout its life cycle. These tiny seabirds, weighing in at just 40-50 g (about the same as half of a stick of butter), spread out over an immense expanse of ocean where inquisitive biologists can’t follow.
My visit to Baccalieu Island is just part of the puzzle that requires a much larger team to investigate.  This year, biologists from multiple organizations (Bird Studies Canada, Environment and Climate Change Canada, Acadia University, University of New Brunswick, Kenyon College, and Bowdoin College) visited key Leach’s Storm-Petrel colonies across the Atlantic region. Building on years of independent research at each colony, this petrel team is attempting to coordinate our measurements of four main components of petrel ecology: (1) adult survival (how many adults return each year to the colony); (2) annual productivity (how many chicks are successfully hatched); (3) levels of mercury in body tissues (feathers and blood); and (4) where the birds are at sea (both during the breeding season and throughout their year-round travels to the Southern Hemisphere).
After six years of making the trip to Baccalieu Island, it now feels like a pilgrimage: a somewhat arduous journey to a remarkable, though-provoking place. We are usually delayed by rain, gale-force winds, and three-metre swells common to Newfoundland. During a break in the weather, we make a precarious landing on Baccalieu’s rocky shore, haul all our food, water, and camping gear to the top of the island, and get ready to work. While studying the Storm-Petrels, we live in tents for up to 10 days, cook over a small propane stove, and hike the island. At the ground level, this research means a lot of biologists getting very dirty. But at a larger level, this relatively simple work equates to a large-scale picture of regional petrel biology over time.
Through this integrated study, we hope to build a more holistic picture of what is causing such an alarming decline for these small seabirds and ultimately, how we can help save them. Over time, we hope to use this knowledge to raise awareness among the people, governments, and industries whose activities may be able to achieve conservation success for these birds.