April 21 is World Curlew Day, established to raise awareness of the plight of these culturally iconic birds.  Curlews along with godwits and the Upland Sandpiper belong to the “Numeniini” – one of the most threatened tribes of shorebirds. Sadly, we have already lost one member of this group, the Eskimo Curlew, from North America. To mark this year’s World Curlew Day, Birds Canada brings you news of projects we are involved in to conserve the Long-billed Curlew and its cousin, the Bar-tailed Godwit. 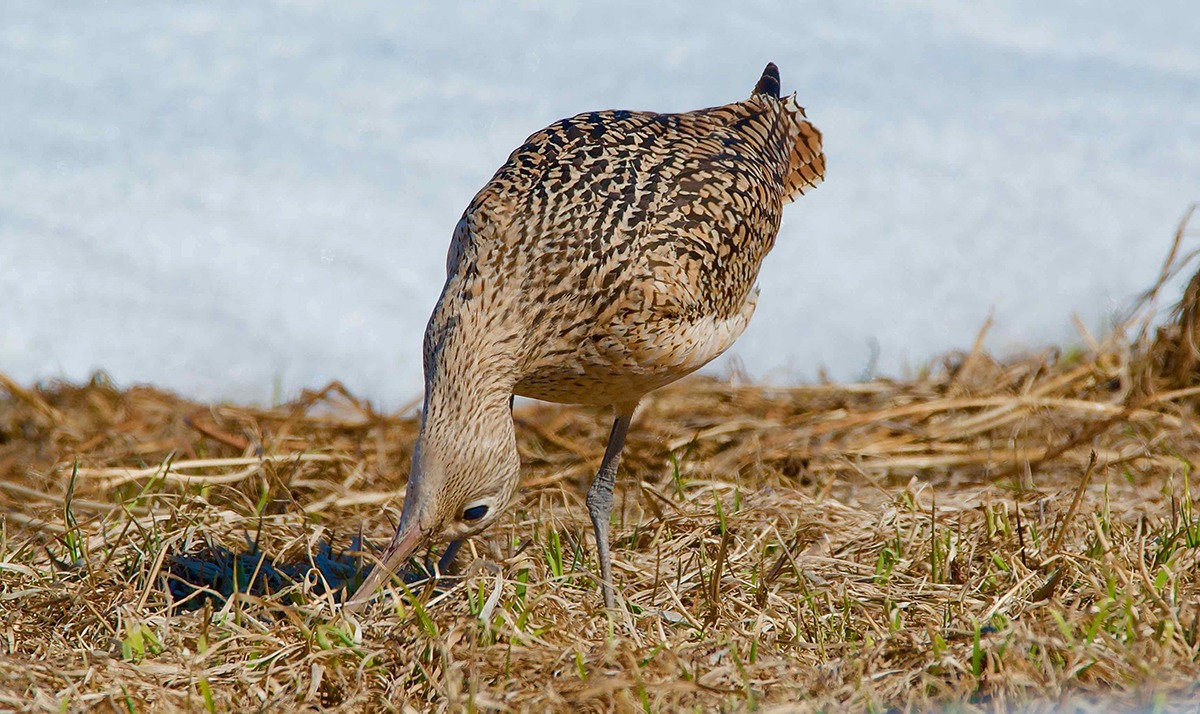 In May 2019, a field team from Birds Canada began the second phase of a project to determine where the Long-billed Curlews that breed in British Columbia spend their time throughout the year. A secondary goal of the study was to examine the curlews’ reproductive success in a mix of different habitat types, from natural grasslands to heavily managed croplands. We were able to find and determine the fates of 12 nests, observing a 90% fledging success rate. As most nests contained 4 eggs, this means that at least 43 young were recruited into the population from this site in 2019!

We fit satellite tags onto 7 of the adult birds in 2019 and have been eagerly following their movements throughout the non-breeding season. This season’s results echoed those of previous tracking work in 2017 on birds breeding in southeastern BC, revealing a fascinating staggered pattern of rapid southbound migration led by the females with the males following two weeks later. Some of these birds stopped briefly at sites in central Oregon before reaching California. Six of them remained in the Central Valley of California throughout the non-breeding period from September 2019 to March 2020. One bird showed a very different migration route through western Idaho and stopping at Salt Lake, Utah, before settling in agricultural land in southern California.

The birds began their northward migration in late March of 2020 and spent up to three weeks in Oregon at sites where land was not covered with snow and it was possible to probe the ground for worms. As of April, the majority of the birds have returned to Prince George, BC and have been re-sighted by diligent volunteer observers in the fields where the birds bred last year.

Further work on this project will examine the crops cultivated in the agricultural areas where the birds resided in California to assess what factors impact curlews during the non-breeding season. We will also continue with outreach work with the farming community in BC to ensure that the breeding habitat of these fascinating birds is maintained.

Keeping our ‘wits about us 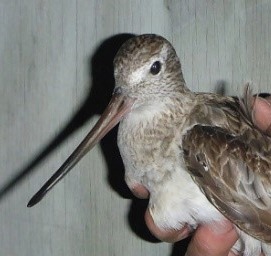 In this time of social distancing, people around the globe remain deeply connected through birds. And there are few better examples of bridging long distances than the Bar-tailed Godwit. The extraordinary migration of the baueri subspecies of this godwit takes it directly over the Pacific, from Alaskan breeding grounds to New Zealand. This non-stop flight covers 11,000 km in eight to ten days! The godwits then fly back north over the Pacific, via the Yellow Sea in China and the Korean Peninsula. These are the same godwits that occur on Canadian Pacific estuaries – like BC’s Fraser Delta, in most years.

A new project is tracking 16 of these godwits. It will provide vital new data to reinforce the implementation of a new policy in China halting any further habitat loss along the coasts of the Yellow Sea, where habitat loss has been identified as the main limiting factor for rapidly-declining shorebird populations on the East Asian-Australasian Flyway.

Many of the godwits, which were tagged in New Zealand, are now in the Yellow Sea. Dr. Phil Battley of Massey University and Birds New Zealand has studied them for much of his career: “The birds are very site-faithful, meaning they will likely continue to return to the same Yellow Sea areas regardless of food supplies or environmental conditions. We want to know how the birds respond to habitat change. Will they continue going to the same place and struggle to refuel?”

This project has already provided amazing insights into how birds deal with the challenges of migration. “Two birds pushed through the headwinds of Cyclone Gretel to complete their direct flight to Asia,” explains Dr. Battley. “One male (identified as “4BWYB”) fought the winds for 36 hours, having travelled 6500 km over six days, only to bail out and return to New Zealand. He departed again after 16 days back in New Zealand, and we are delighted to report that he is now refueling in the Yellow Sea after travelling 17,000 km in less than a month!” 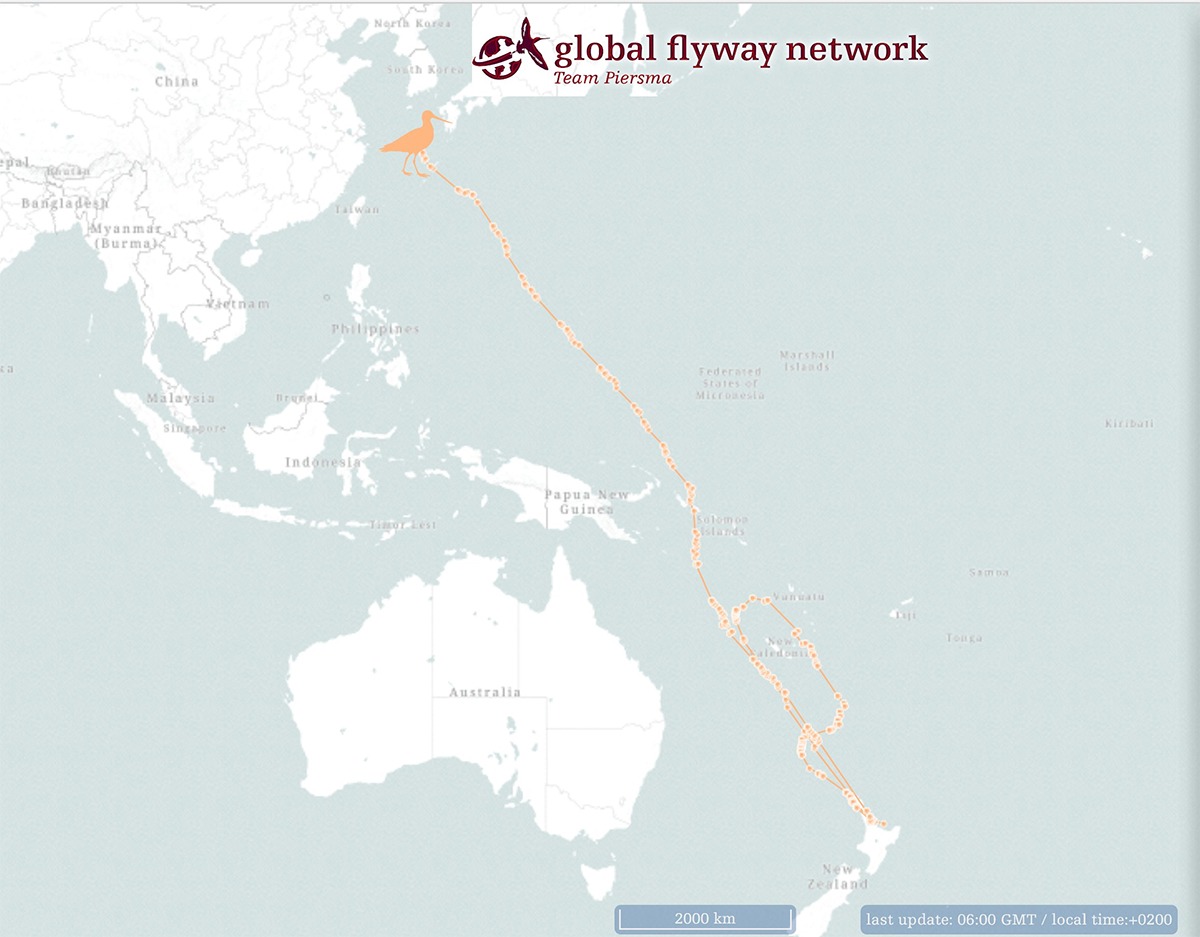 We encourage you to share the stories of these amazing curlews and godwits with any friends and family living along their migration routes!