Research Spotlight: A Domino Effect in the Lives of Tree Swallows 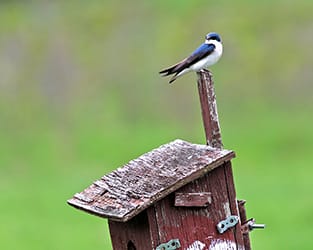 In January, a paper entitled “A range-wide domino effect and resetting of the annual cycle in a migratory songbird” by Dr. Elizabeth Gow and 28 other authors, including myself, was published in the journal Proceedings of the Royal Society B. This paper concerns the timing of breeding of Tree Swallows at 12 sites across North America and how variation in this timing of breeding across those sites influences the timing of future events in the birds’ life cycle.
We used light-level sensors known as geolocators affixed to 133 birds to show that birds bred later the further north they were. Birds that bred later departed their nesting sites, moved through their staging sites, and arrived at their overwintering sites later than birds that bred earlier. However, this “domino” effect was absent by the time the birds left their wintering sites, revealing a resetting of their annual cycle.
These findings show how breeding at high latitudes can have an effect on the migratory stages that follow breeding, but that this effect is removed during extended non-breeding stages (i.e., over winter). These findings highlight the importance of high-quality stopover habitats between breeding and non-breeding grounds that allow more northerly breeding birds to reach the overwintering sites in time to reset their life cycle.