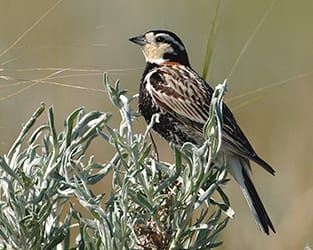 The IUCN Red List is the official word on the extinction risk to all species worldwide. It is updated annually. The 2017 list, just out, features three iconic Canadian species: Chestnut-collared Longspur, Snowy Owl, and Black-legged Kittiwake. Each is listed as “Vulnerable,” which means it faces a high risk of extinction in the wild. Each is also an emblem of ecosystems undergoing rapid change.
The Chestnut-collared Longspur’s unwelcome, if unsurprising, new status reflects the huge loss and fragmentation of native grasslands from the Canadian prairies to the Chihuahuan Desert in northern Mexico. The key issue on the breeding grounds is conversion to crops. On the longspur’s wintering grounds, conversion of prairie and desert grasslands to irrigated cropland is the main issue. The Manitoba and Saskatchewan breeding bird atlases are informing where to focus conservation effort, and Bird Studies Canada stewardship actions led by Christian Artuso aim to save remnant native prairie within Important Bird and Biodiversity Areas, and through the Manitoba Species at Risk Program on Agricultural Lands.
We are also involved in a longer-term, market-based solution involving sustainable beef ranching in Canada, the Canadian Roundtable for Sustainable Beef. Chestnut-collared Longspurs require recently grazed (or burned) prairie for breeding. We are helping longspurs, and a host of other grassland species at risk, by supporting ranchers whose livelihoods are under threat from market pressures. “Ranchers have stewarded the grass because it is their livelihood, and their pastures are important habitat for many birds,” says Bird Studies Canada’s Manitoba Program Manager Dr. Christian Artuso. “Modern economics are making ranching as a way of life much less profitable, and the pressure to sell land or convert to crop farming is enormous. We can help grassland birds greatly by supporting local beef producers.”
The Snowy Owl also makes this year’s list. Its Arctic tundra habitat is experiencing some of the greatest climate-driven changes on the planet. However, the increased threat category – from last year’s “least concern” to this year’s “globally threatened” assessment – may be more precautionary than absolute. The suggestion is of a steep decline in North America, but unequivocal evidence is scarce from its vast and very remote circumpolar range. Concerns that climate change may be affecting the availability of its prey may have tipped the balance.
The Snowy Owl example shows how global and national approaches to assessing risk can differ. The Snowy Owl is not currently being assessed by the Committee on the Status of Endangered Wildlife in Canada (COSEWIC). Bird Studies Canada’s Jon McCracken, who was until recently Co-Chair of COSEWIC’s Birds Subcommittee, notes: “COSEWIC may well view the Snowy Owl as being Data Deficient, rather than actually Threatened.” One thing this new IUCN listing will do is spark more research to better understand this beloved species.
The sight of a Black-legged Kittiwake colony clinging to vertical sea cliffs, amplifying the wall of sound their repeated “kitti-waayke” calls generate, is a truly unforgettable experience. Several threats are driving its decline, such as unsustainable fishing, marine plastics, incidental mortality, and climate change. Most of the world’s Black-legged Kittiwakes breed in northern Europe and Greenland. North America supports about 20% of the breeding colonies, mostly in the northeast Pacific. North American marine waters provide important foraging grounds for kittiwakes from multiple countries that converge here in winter. Canadian colonies are faring better than many, and may become increasingly important for the kittiwake, which is expanding its breeding range in the Maritimes and has recently been recorded breeding for the first time in British Columbia.