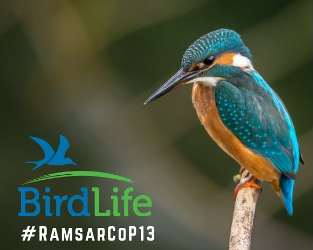 From the Emirates to Vancouver, and back!
Bird Studies Canada’s collaborative work to find a conservation solution to habitat loss in the Fraser River Estuary Important Bird and Biodiversity Area (IBA) in Danger recently took Pete (supported remotely by James) to Dubai, as part of the BirdLife International delegation to the 13th Conference of Parties to the Ramsar Convention. We have been working at an international policy level on this issue since the Global Flyways Summit in April of 2018, co-organized by BirdLife, which coincidentally also took place in the United Arab Emirates. In August of 2018, at the International Ornithological Congress (IOC) in Vancouver, we convened scientists to recommend priority actions aligned with draft resolutions to be discussed at both the Ramsar and the upcoming Convention on Biological Diversity meetings, and already passed by the Parties to the Convention on Migratory Species. In particular, the IOC science statement supports the call for a global forum that cares for coastal wetlands and the bird populations they support: a “made-in-Canada” contribution to Ramsar’s deliberations.

What is Ramsar?
Ramsar is the United Nations Convention on Wetlands. It is a treaty between the governments of 170 countries that provides the framework for the conservation and wise use of wetlands and their resources. The Convention was established in the Iranian city of Ramsar back in 1971, is run by a Secretariat in Switzerland. Every three years, Ramsar convenes a Conference of the Parties (countries), or “COP”, to adopt new policy recommendations designed to realize the benefits of wetlands to nature and society. Ramsar entered into force in Canada in 1981. To date, 37 Ramsar sites have been designated, covering over 13 million hectares of internationally important wetland habitats (many of which are also IBAs).

How does it work?
Ramsar is legally non-binding in most instances, unlike some conventions, e.g., the Convention on International Trade in Endangered Species (CITES). So it works more like a “gentleperson’s agreement” than a penal code. Country delegates are committed wetland advocates, and peer-to-peer relationships within the convention carry considerable weight. Successful wetland business is therefore achieved by levering the subtleties of language and process. At the COP, country delegates propose and debate resolutions around themes or issues. Discussions over the language can go for many hours, because language nuance can make some resolutions binding for some countries.
International civil society organizations observe and provide advice, but do not make decisions.  There are six official International Organization Partners to the Ramsar Convention, each with specific expertise on wetlands, helping parties to the convention make more informed decisions. These international organizations also help implement many aspects of the convention, from monitoring and reporting to site management and protection. BirdLife International is one of these partners, and Bird Studies Canada, in our role as Canadian BirdLife co-partner, joined the BirdLife global policy team, the BirdLife Middle East Secretariat, and other BirdLife Partner representatives from Spain (SEO), Myanmar (BANCA), and Zimbabwe (BirdLife Zimbabwe) at this Ramsar COP. 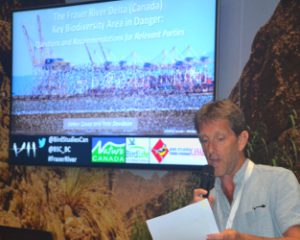 Why was it important for Bird Studies Canada to participate?
We took part to fulfil two objectives: 1) to profile why the Fraser Delta is an IBA in Danger and a Ramsar Site under threat; and 2) to support BirdLife International’s input on the resolutions that are important for birds, in particular, the resolution on the conservation of coastal wetlands and establishment of a “global coastal forum” to implement the resolution.
Bird Studies Canada was invited to profile the Fraser at two “side-events”, hosted by the International Organization Partners and attended by well over 100 country delegates and observers. Pete was also able to spend time with Canada’s delegate to the convention, Elizabeth Hess of the Canadian Wildlife Service. Pete and Elizabeth shared concerns about the ecological health of this Ramsar site, and talked about a collaborative approach to finding a conservation solution there. Bird Studies Canada strengthened existing, and built new, relationships, growing the constituency of support for the Fraser.
We also supported BirdLife’s policy team to suggest a raft of revisions to the language in the coastal wetlands resolution and submit the IOC supporting scientific statement. This resolution originally evolved thanks in part to support from the Government of Canada. Elizabeth Hess proudly mentioned these Canadian supporting pieces in her plenary comments, and we are delighted to report that the resolution was passed on the final day.

Working across the conventions to support coastal conservation
The resolution on coastal wetlands is important because it creates the basis for establishing a global coastal forum across three conventions (with the Convention on Biological Diversity, or “CBD”, set to discuss a draft decision on the forum at its COP next month in Egypt).  If adopted by the CBD, we will have a brand new opportunity to increase resourcing and other support, including political influence, for the conservation of coastal wetlands at the scale of flyways, which is what migratory birds desperately need.
It was a privilege to work with and among the world’s leading wetland conservation science and policy people, and we have brought a large number of significant new contacts into the growing network of organizations supporting a collaborative solution to habitat conservation in the Fraser. Our special thanks to BirdLife International, especially the policy team of Melanie Heath, Noelle Kumpel and Dena Cator, from whom we learned a great deal about how these conventions work, and without whom we could not have achieved our objectives of participating in Ramsar. 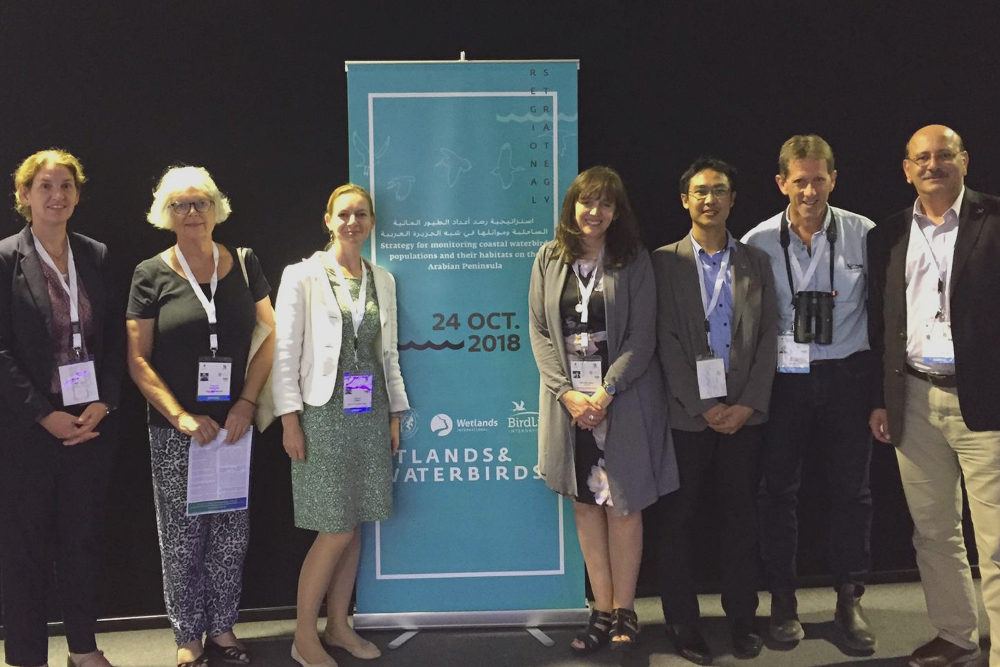