Racing Pigeons Help Scientists Get the Most Out of Motus 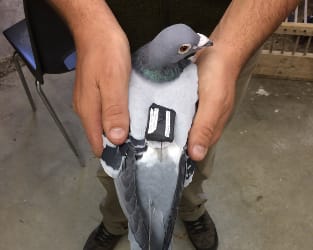 Racing pigeon carrying a GPS ‘backpack,’ as well as a radio-tag
with antenna extending over and beyond the tail. Photo: Tara Crewe

The Motus Wildlife Tracking System is being used by numerous researchers and organizations to gain new knowledge about the movements of small songbirds, bats, and insects during breeding and migration, and on overwintering grounds. To get the most out of the radio telemetry data collected using Motus, I’ve been leading an effort to test and calibrate the system.
Detection of a tagged animal by Motus tells us that the animal was within up to 20 km of a Motus receiving station, but little work has been done to measure the sensitivity of these stations. For example, we still don’t know the actual detection range of most stations, how that range varies within and among stations, and what proportion of tagged animals remain undetected when they fly within range.
To begin tackling some of these unknowns, I’m working with members of the Tillsonburg Racing Pigeon Club to track the movements of homing pigeons during weekly club races. Unlike small songbirds, pigeons are robust enough to carry larger geographic positioning system (GPS) ‘backpacks,’ and they more predictably return home for tags (and data) to be recovered.
Every weekend since May 27, I have tagged three to five racing pigeons with both GPS and the smaller radio-tags used to track small organisms with Motus. During each race, GPS units provide a precise location (accurate to within 10 m) for each bird every second. These locations will provide a baseline to determine how far birds were from Motus stations when they were detected, and how detection declined with distance from a station, or with other factors such as weather. To date, birds have been released from as far away as Merrickville, ON (over 450 km away). As they’ve raced home to the Tillsonburg region, they’ve passed many Motus stations along the north shore of Lake Ontario and throughout southern Ontario. 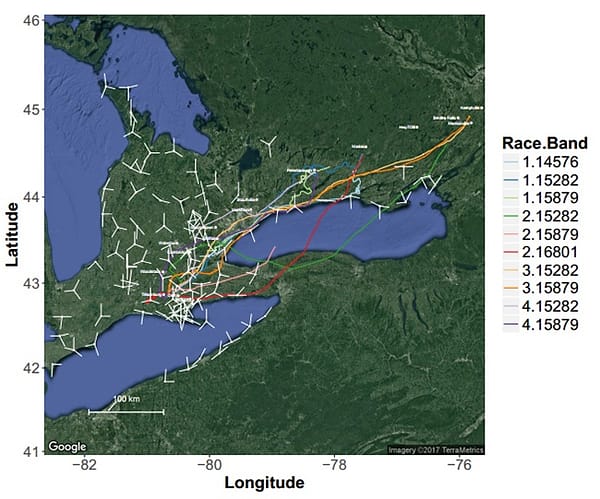 Flight paths of homing pigeons recorded by their GPS ‘backpacks’ as they raced through Ontario past several Motus stations (white dots). White lines show the orientation of receiving antennas.

Calibrating the Motus system will help researchers design their studies to better meet project goals. The GPS tracks will also be used to test how well statistical models of animal movement, currently in development for Motus data, are recovering the true path of tagged animals. Estimates that better reflect the true movement path will improve our understanding of the factors influencing movement behaviour, and contribute more meaningful information to conservation planning.
This project will continue until the pigeon racing season ends in mid-July, and is a collaboration between Bird Studies Canada, Dr. Yolanda Morbey from Western University, and Bird Studies Canada’s Chair of Ornithology at Acadia University, Dr. Phil Taylor. We extend special thanks to Roland Paret of the Tillsonburg Racing Pigeon Club, who has been coordinating our collaboration with their club. Financial support for this project was provided by Mitacs Accelerate and Lotek Wireless Inc.