Piping Plovers Saw Many Successes, Some Challenges in 2018 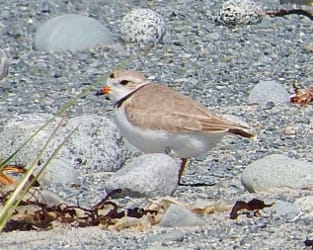 Ontario
Ontario had a fantastic Piping Plover season. There were 8 nests across the province, all of which hatched, resulting in 16 fledges overall!
Many partners worked together to ensure the Piping Plovers had a successful nesting season. Big thanks to Environment and Climate Change Canada, Ontario Parks, the Ministry of Natural Resources and Forestry, Stewardship Grey Bruce, and Friends of Nancy Island for their constant support. Additionally, we received a great deal of support from the municipalities where plovers are nesting.
Another warm thank-you goes out to all the volunteers that put in countless hours on the beaches in 2018, and every summer. Volunteers collect important biological data and help to inform the public about Piping Plovers, rallying enthusiasm for this endangered species. Most beachgoers are thrilled to learn about the conservation practices, and often return to get updates on the plover families. We truly couldn’t run such a successful program without our dedicated volunteers.
The plovers have all made their way south for winter, but we will be excitedly awaiting their arrival in the spring. We’re already looking forward to another great season in 2019!
Migration update: Six of Ontario’s fledges and five of the adults have been spotted on the wintering grounds so far. The majority have been found in Florida, with a couple of sightings coming from Georgia and Maryland. Almost all sightings have been in state parks and protected natural areas, reaffirming the importance of protecting those sites. They’re often spotted mingling with Piping Plovers from the Prairies and the Atlantic region, along with other shorebirds such as Snowy Plovers, Semipalmated Plovers, and Sanderlings.
Learn more about Piping Plover Conservation in Ontario.

New Brunswick & Nova Scotia
For species at risk, there’s often good and not-so-good news to report when it comes to the status of species recovery. This held true for endangered Piping Plovers in Nova Scotia and southeastern New Brunswick in 2018, though overall, the region encompassing Eastern Canada (including NB, NS, NL, PEI, and QC) and Saint-Pierre and Miquelon documented a slight increase in population compared to 2017 (181 pairs, up from 169).
Bird Studies Canada’s team of staff, partners and volunteers documented fewer breeding pairs in both New Brunswick and Nova Scotia compared to 2017. The seven pairs in southeastern New Brunswick had a successful breeding season, producing 1.71 fledglings per pair and exceeding the annual productivity target of 1.65 fledglings.
In Nova Scotia, productivity was 1.5 fledglings and, thus, slightly below the annual target. Due in part to nest failures in May and June, plovers had the highest proportion of nests hatching in late July and August seen in recent years in Nova Scotia. This led to chicks remaining on beaches well into August.
Bird Studies Canada’s team had one of their busiest plover field seasons in recent years. This was due to the late nesting, and to the extensive efforts the team put into re-sighting and reporting banded birds on the breeding grounds. We documented a remarkable 88 individual banded Piping Plover adults and chicks at 28 different beaches in Nova Scotia alone. These data are vitally important to Environment and Climate Change Canada’s multi-year research study, which aims to understand survival of adults and young, identify when plovers’ are most at risk in their annual cycle, and locate significant wintering sites.
Learn more about Piping Plover Conservation in New Brunswick and Nova Scotia.