Piping Plovers Hang On in Ontario and Manitoba 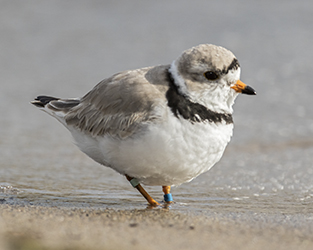 Following an absence of breeding pairs in Ontario for more than 30 years, Piping Plovers have been making a gradual return at selected nesting locations on Canadian Great Lakes shores since 2007. Federal and provincial governments and local agencies cooperate to protect these Endangered shorebirds and their habitat. Trained volunteer ‘plover guardians’ provide vital services by monitoring the habitat and birds, and educating the public about plovers and efforts to protect them.
This summer, 13 breeding pairs were observed across five sites in Ontario, and at least eight chicks fledged (seven at Sauble Beach and one at Wasaga Beach). Unpaired birds were also reported at Manitoulin Island, Port Franks, Toronto, Port Dover, Port Burwell, and Presqu’ile Provincial Park.
Piping Plovers recently resumed nesting on the Canadian shores of Lake Ontario after a decades-long gap between 1934 and 2015. This year represented a setback for the region compared with 2016, when a combined total of 10 chicks were raised at Darlington Provincial Park and Presqu’Ile Provincial Park. However, two chicks – produced by one of three nesting pairs at Darlington – were doing well as of the first week of August, and have likely fledged by now. The beach at Presqu’Ile was severely impacted by flooding this year, and no Piping Plovers nested there. A short distance away, Piping Plovers were observed nesting at North Beach Provincial Park for the first time. This beach is small and subject to a high level of disturbance, so this came as a surprise to plover experts. Unfortunately, all four chicks were depredated.
Overall, it was not a very successful year for Piping Plovers in Ontario. High water levels along the Great Lakes made it challenging for the birds to find suitable nest locations, and fledge numbers were down across the region. One silver lining is that breeding birds returned to Lake Erie; two pairs nested on the U.S. side, in Pennsylvania. Will Long Point, ON be next?
To find out more about important stewardship efforts on behalf of Ontario’s Piping Plovers, please visit the Friends of Nancy Island and Wasaga Beach Park, Plover Lovers, or the Ontario Parks blog.
Late-breaking news from Manitoba: at least one Piping Plover fledged in the province this year! Find out more in a recent blog post by Dr. Christian Artuso. This is the second year in a row that at least one chick has been confirmed to have fledged in Manitoba. Before that, no successful nesting attempts had been recorded there since 2010. We thank the dedicated team – comprised of Bird Studies Canada and Manitoba government staff, as well as volunteers – for their efforts.