Piping Plovers face a range of challenges, from hungry predators to hoof prints

The Piping Plover is an Endangered species of shorebird with three populations across Canada: the Atlantic population, the Prairie population, and the Great Lakes population. Each of these areas presents unique threats and challenges for Piping Plovers, so how do we manage and conserve their populations in three very different landscapes? 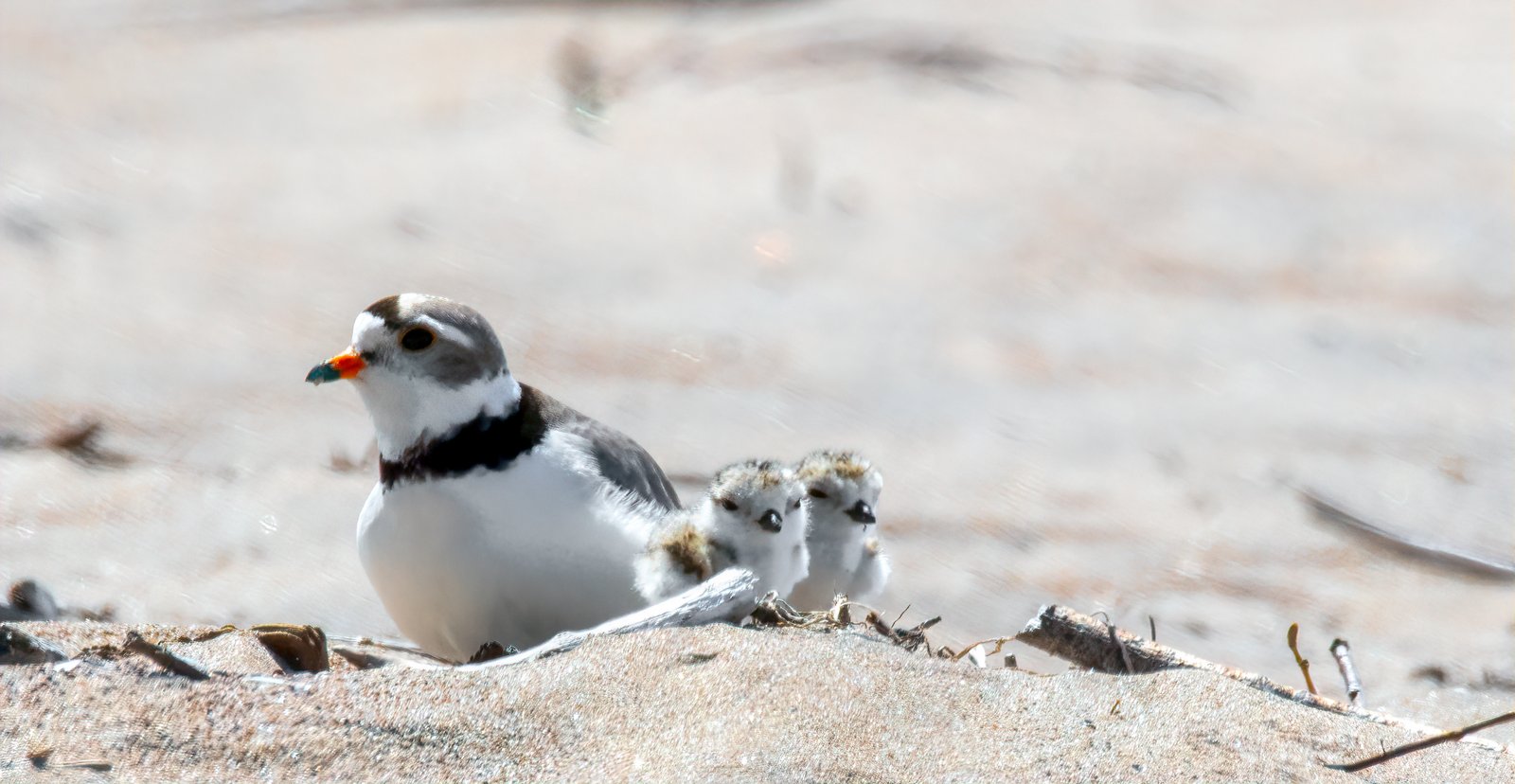 The Great Lakes population is the smallest of the three populations. In 2021, it consisted of 74 pairs. Ontario hosted only four of these pairs in 2021. One of the biggest threats this population faces is human disturbance in the form of recreation and habitat degradation. The Ontario Piping Plover Conservation Program uses fencing to encourage beachgoers to give the plovers space, as well as predator exclosures (barriers that allow plovers to come and go, but block predators) to protect the nesting pair and their offspring. The Great Lakes conservation team also bands all of the region’s nesting plovers, which helps researchers track the life history of each bird as an individual and provides insights into the success of various conservation efforts. This also helps with outreach and education initiatives conducted on nesting beaches through the help of volunteers. Each Ontario nesting plover has a nickname and a story, which volunteers share with the public to help others fall in love with this charming species. 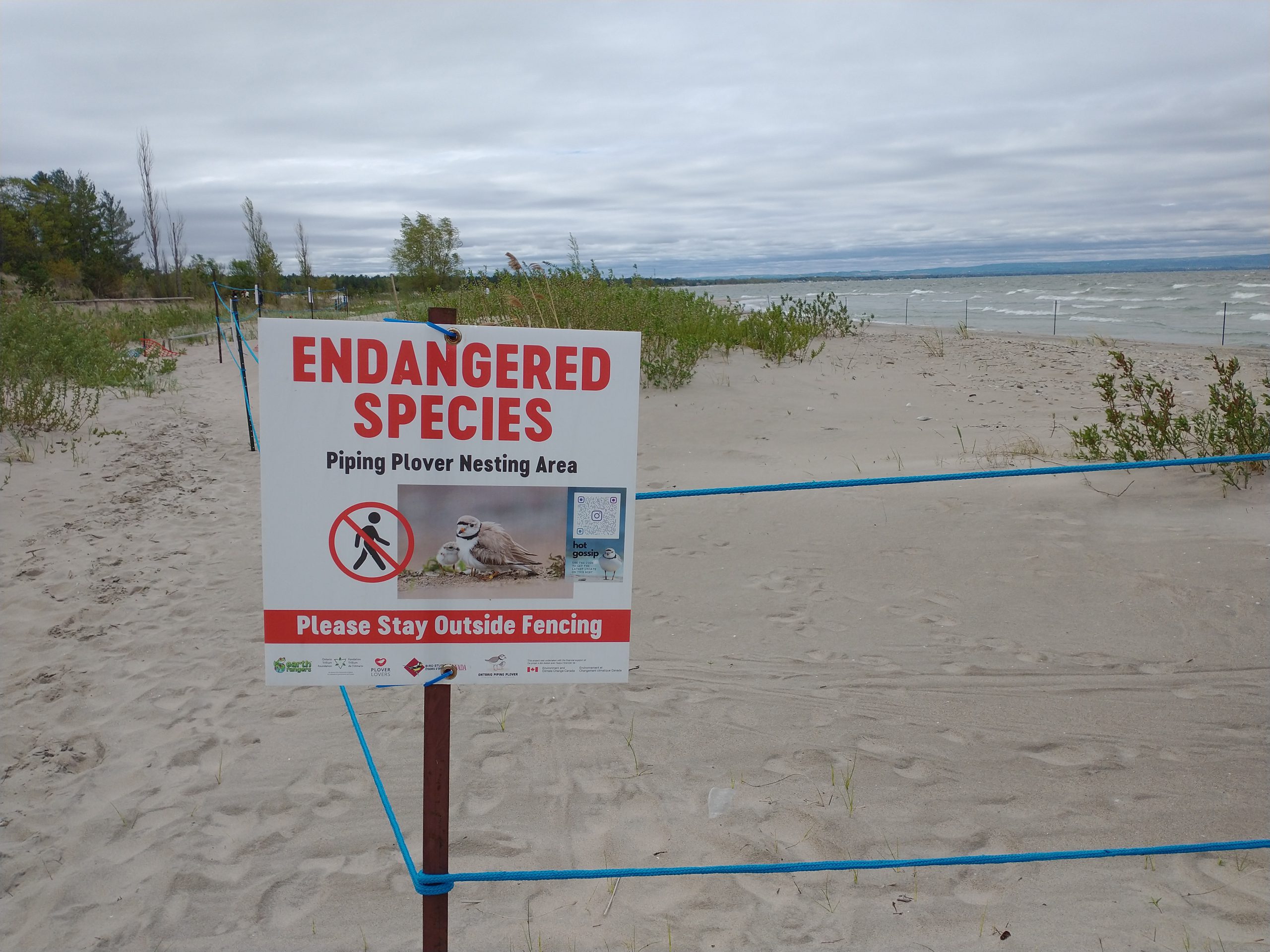 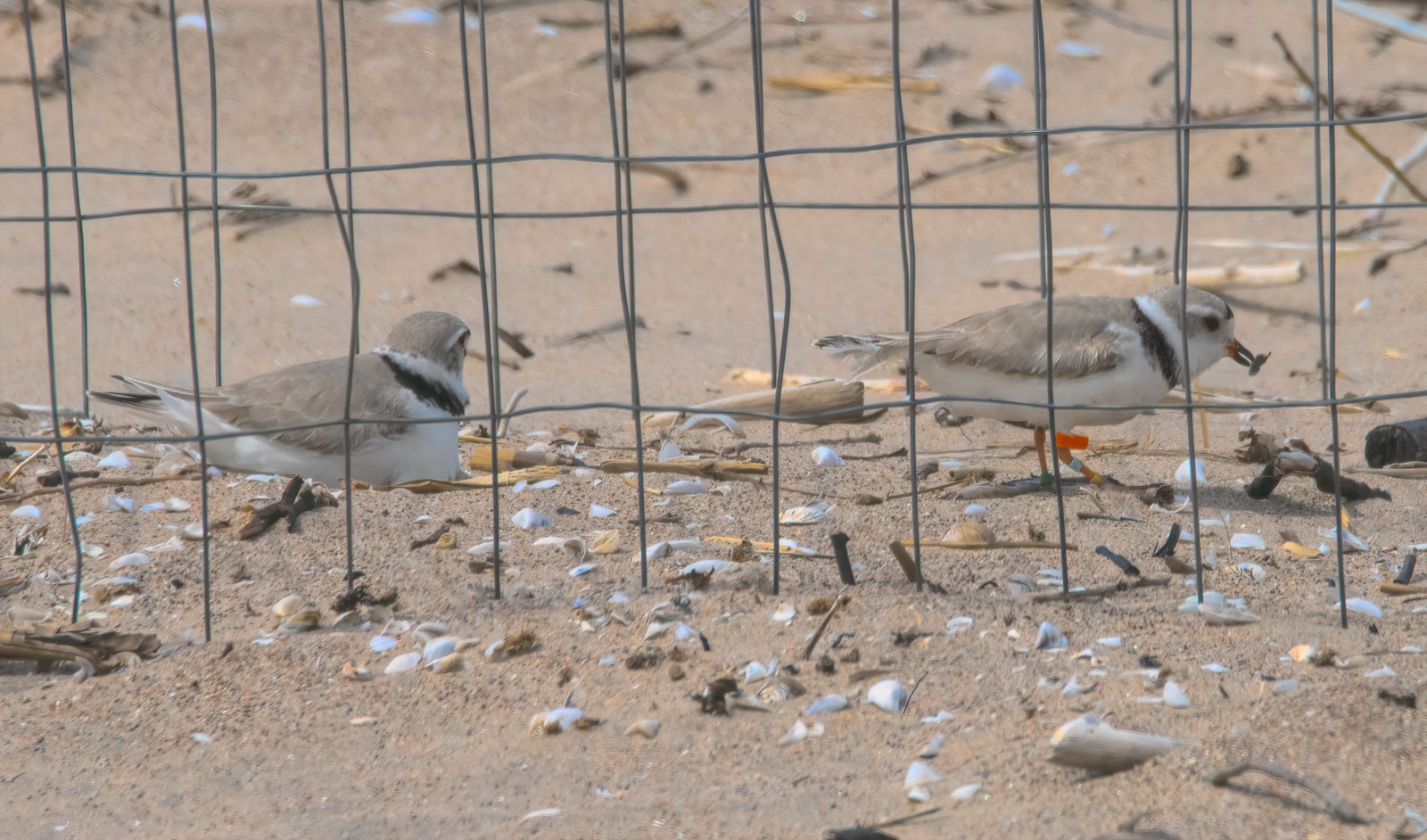 Similarly, in the Atlantic region, Laura tells us that a plover wearing a leg flag inscribed with “HL” is lovingly referred to as “Helen Louise” by locals, volunteers, and staff. The Atlantic population of Piping Plovers nests on beaches in Nova Scotia, New Brunswick, Prince Edward Island, Newfoundland, and Québec. Last year, the Atlantic provinces hosted 178 pairs, which is short of the recovery goal of 310 pairs. With lots of coastline to choose from, Piping Plovers don’t run into human disturbance as much as they do in Ontario, but they do have predator issues. While predator exclosures have been successful in Ontario, the Atlantic conservation team doesn’t use them. Staff and volunteers found that predators in this region actually clued into the presence of the exclosures, posing an additional threat to the eggs and adults. Instead, conservation efforts for this population focus on stewardship strategies that encourage beach users to leash dogs, keep vehicles off the beach, and keep beaches clean of garbage to avoid attracting predators. 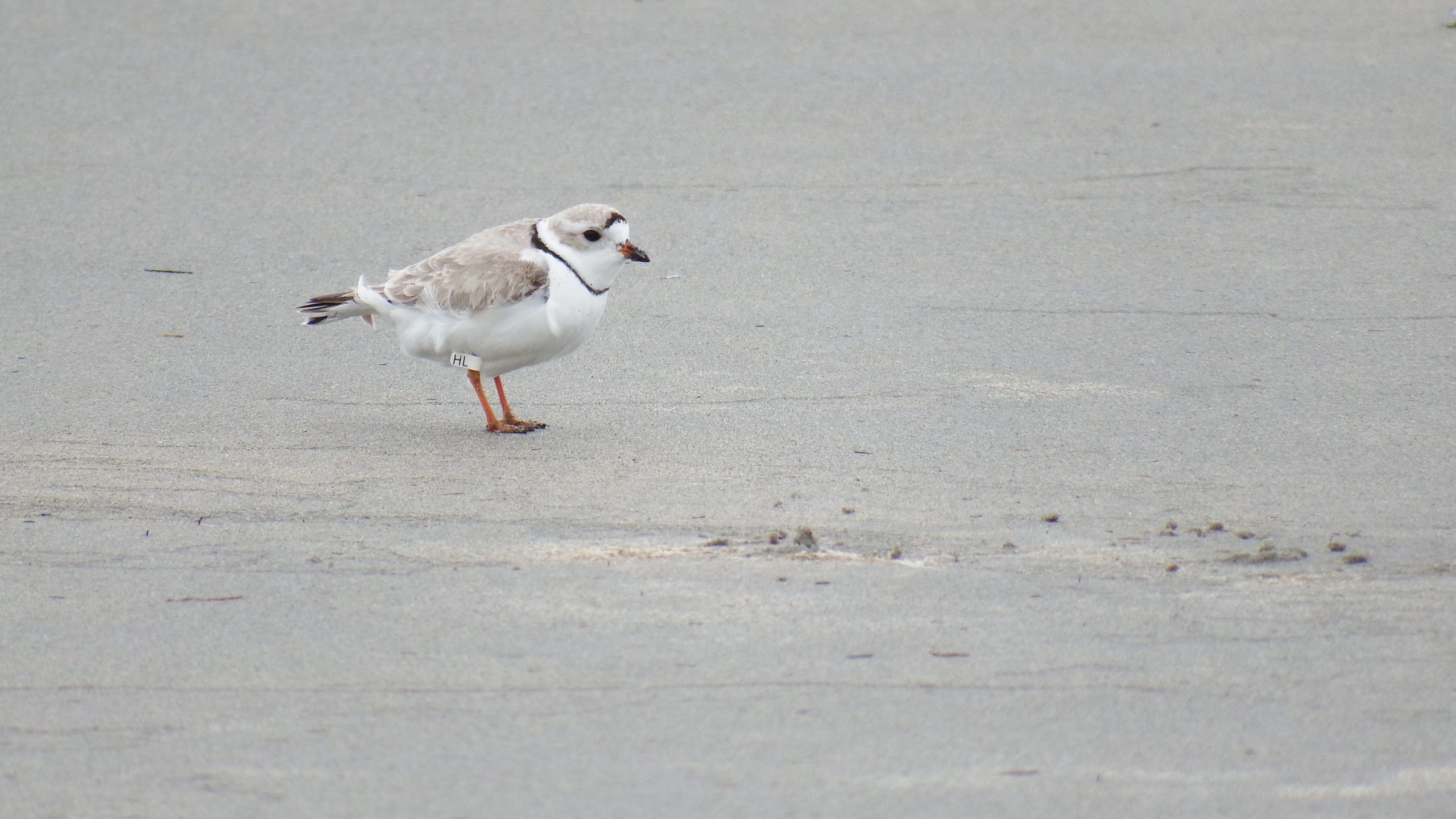 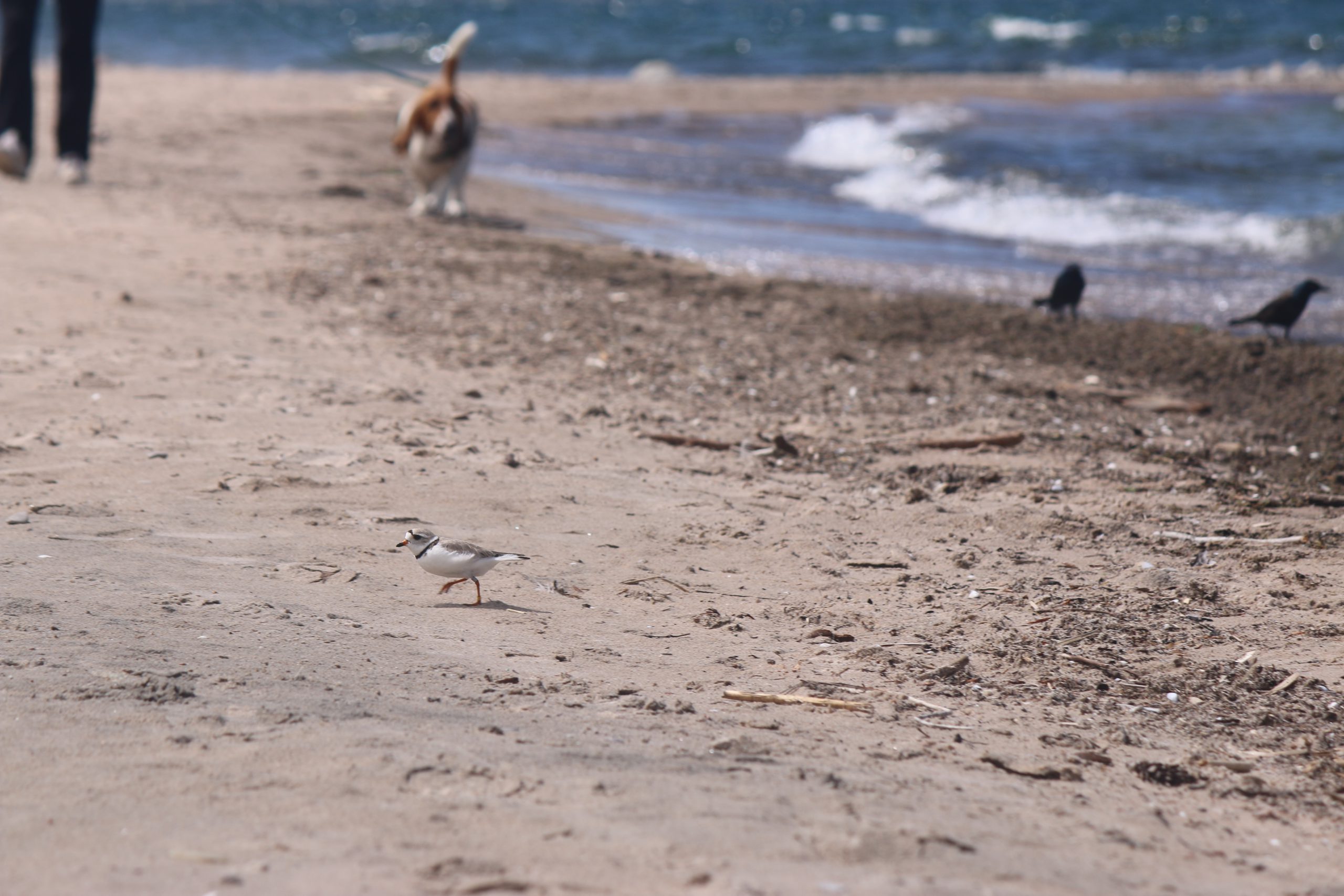 Keeping dogs on a leash at the beach helps plovers. Photo: Sydney Shepherd

The Great Plains population of plovers visits Manitoba, Saskatchewan, Alberta, and sometimes western Ontario and the U.S. The Canadian portion was estimated to host fewer than 500 pairs in 2016. These plovers see less human disturbance at their breeding grounds than other populations; however, one thing they have to contend with is cattle! Grazing cattle on Piping Plover nesting areas sometimes leave deep hoof print depressions in the ground, which may trap flightless chicks. Conservation initiatives here involve working directly with farmers to help protect nesting habitat where cattle and Piping Plover cohabitate, using tools like cattle fencing and alternate cattle watering systems.

The Piping Plover episode of The Warblers podcast is part of Wake-up Call, a special series focused on Canada’s most threatened and at-risk bird species. Thank you to Environment and Climate Change Canada for generously supporting The Wake-Up Call. 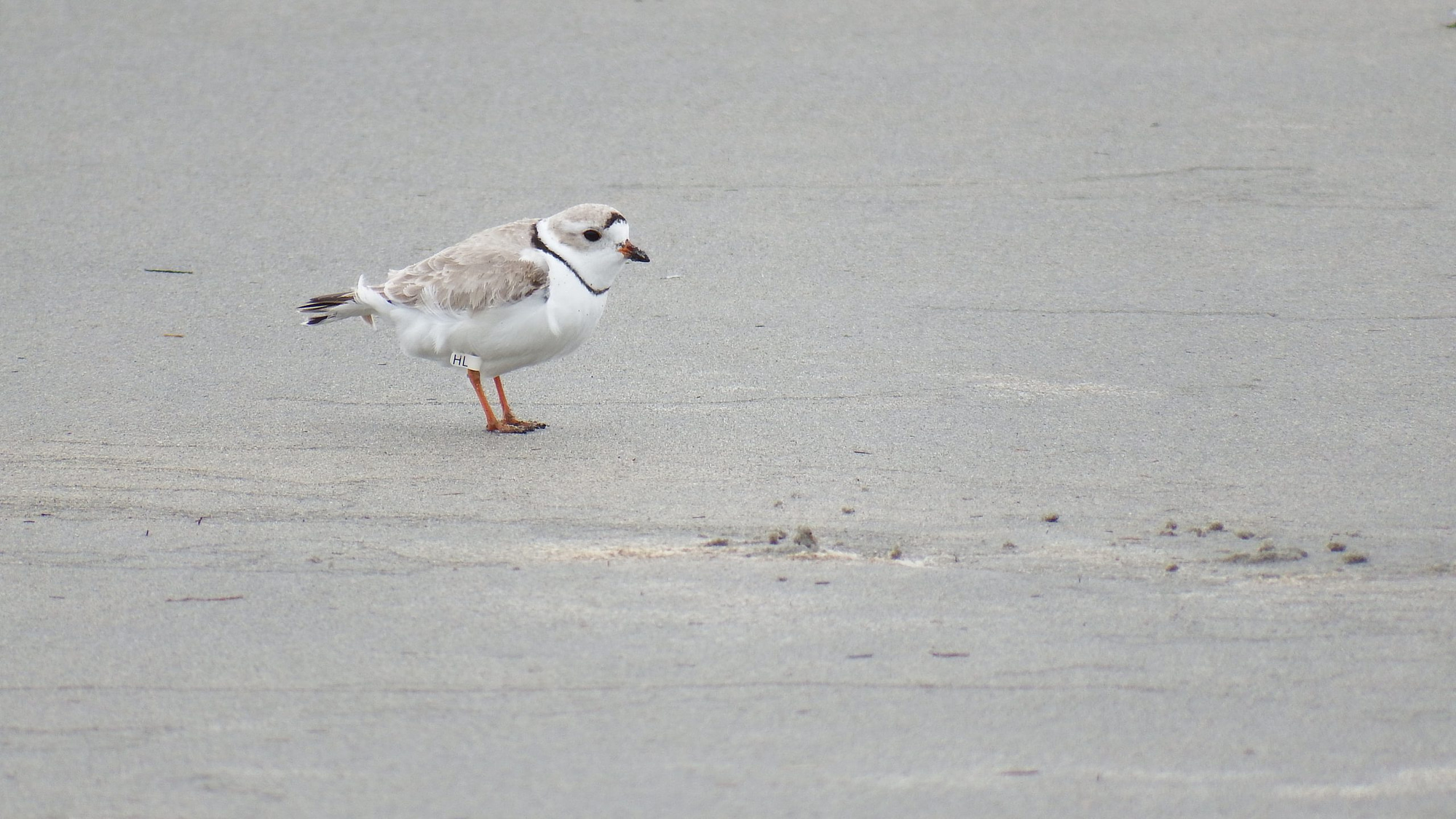