4 May 2016 – Panama is an unequalled marine crossroad. Its extraordinary canal allows rapid passage of ships of all sizes between the Atlantic and Pacific oceans. 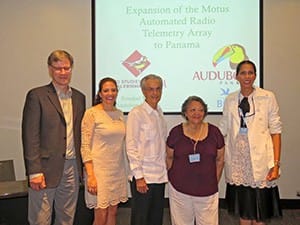 Panama is also an enormous avian channel. Each spring and fall, tens of millions of birds migrate through and alongside the narrow land bridge between North and South America. At peak fall migration, over 2 million shorebirds may be seen in Panama Bay. Some 2 million birds of prey (such as hawks and eagles) soar south through the peninsula on a single day.
Last week, BirdLife Americas partner organizations converged in Panama for biennial meetings on bird conservation in the Western Hemisphere. Birds Canada and the Panama Audubon Society had unusual news to share. For the first time ever, four thrushes carrying radio-tags were detected by receiver stations just deployed in Panama. 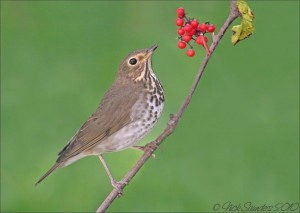 The Swainson’s Thrushes were radio-tagged in Colombia in the winter using Birds Canada’s Motus Wildlife Tracking System. Ph.D. student Ana Gonzalez tagged these birds as part of a collaborative research project of the University of Saskatchewan, Environment Canada, SELVA, and Birds Canada. The thrushes began their northern migration toward Panama in mid-March. In early April, Birds Canada, SELVA, and the Panama Audubon Society had installed four Motus receiving stations along the Canal Zone. At less than 80 km in width, the narrow Isthmus of Panama can be spanned by so very few receivers!
Latin for motion, Motus is an ingenious tracking system for migrating birds and other animals. Tiny radio-transmitting tags, developed by the Canadian-based Lotek Wireless Inc., can be attached with a very small battery to birds as small as medium-sized warblers. Inexpensive antennae are positioned at receiving stations at various locations. These are currently concentrated in eastern North America, but our vision is for an array deployed across the hemisphere, allowing tracking of full life-cycles of target species. To date, over 50 bird species have been tracked.
On April 14, one month after leaving Colombia, the first thrush was detected in Panama. View the thrushes’ journeys from Colombia to Panama on our animated map. “We had been so excited to deploy the Motus radio receivers in the Canal Zone with our partners, but we were even more excited when the birds were detected!” said Panama Audubon Society Executive Director Rosabel Miró.
On April 28, at the BirdLife meetings, we happily signed a memorandum of understanding confirming this unique international partnership between the Panama Audubon Society and Birds Canada. Witness to the accord was Raúl Arias De Para, the owner of the Canopy Tower ecotourist lodge, where one of the receiving stations is located. “About 15 years ago, I had little interest in birds, but I saw an ad for a birdwatching course with the Panama Audubon Society,” Raúl told us. “Now I own a series of ecolodges in Panama, and I’m the proud host of a Motus tracking station.”
According to BirdLife International CEO Patricia Zurita, “This unique project is an excellent example of the kind of cooperation BirdLife should do more of to conserve birds internationally.” Before the announcement was finished, she had already emailed other BirdLife partners, suggesting they may be able to use Motus to solve some of their migration mysteries.

In addition to the Canopy Tower location, other receivers were installed at the Smithsonian Tropical Research Institute on Barro Colorado Island, the Panama City Sewage Treatment Plant, and the Galeta Point Marine Laboratory. Thanks to all involved, and especially Karl Kaufmann, for volunteering his time to help organize and install the receivers.
Soon, the tagged thrushes detected in Panama may be tracked by receivers along the U.S. Gulf Coast, and later by arrays in central and eastern North America. View an animation of the movements of thrushes tagged last year here.
Motus receivers across the Panama Canal Zone are now strategically placed to capture critical information to guide conservation. Growing interest among BirdLife partners, government agencies, and researchers will help us fill in the Motus tracking gaps on both continents.
We can only conserve birds by protecting their habitats. Often we know little about when they arrive, how long they stay, and where they feed and rest. Motus offers simple, inexpensive technology to answer these questions and more. This exciting technology is helping us do the most we can for the birds of the Americas.

This project was undertaken with the financial support of the Government of Canada.
To learn more, please contact Birds Canada’s Motus Program Manager Stu Mackenzie at smackenzie@birdscanada.org.