Canadians Steal into the Night to Survey Owls 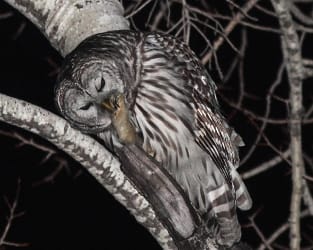 An early spring highlight for over 1200 adventurous Citizen Scientists is their annual Nocturnal Owl Survey, when they listen for and count owls along remote roads. These surveys are conducted in almost every province and territory, with an impressive network of coordinators and volunteers ensuring that the majority of southern Canada is monitored on an annual basis. The final product is a strong dataset with potential for national reporting on the status of owls in Canada. This valuable tool can be used to inform policymakers, guide sound conservation decisions, and enable Canada to meet its responsibilities with respect to conserving the world’s owl populations.
Please enjoy these regional highlights from the 2017 survey, achieved thanks to devoted volunteers like you.
Atlantic Canada

Bird Studies Canada gratefully acknowledges all of the conservation partners who have supported the Nocturnal Owl Survey. We also thank the 2017 participants for their continued support, and wish the 2018 survey teams a wonderful season!
As with all long-term monitoring programs, there is an annual need to fill survey gaps. If you are interested in the Nocturnal Owl Survey, please contact the coordinator for your region through the program page on our website.