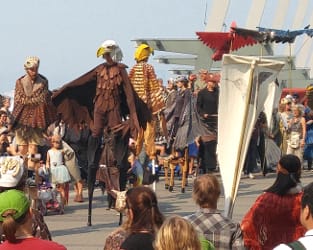 After a long period of preparation and anticipation, the 27th International Ornithological Congress and first-ever Vancouver International Bird Festival took place in Vancouver from August 19-26. Together, these events represented a formidable success for birds, ornithology, and conservation! Bird Studies Canada was proud to bring these events to life as a Co-host of the congress and Community Partner of the bird festival.
Throughout the week, the Vancouver Convention Centre buzzed with energy as bird experts and enthusiasts gathered – not only to celebrate their shared passion for birds, but also to exchange cutting-edge information and ideas, and to forge and strengthen relationships that will enable us to move forward together on current issues in ornithology and conservation. The attendance numbers were impressive: around 1600 delegates from 74 countries for the congress and 33,000 participants for the festival! Among the attendees were 19 members of Bird Studies Canada’s staff, plus board members and volunteers. Each Bird Studies Canada staff member reported making valuable connections during the events that will support their work going forward.
Here are just a few of Bird Studies Canada’s top highlights and accomplishments from the events that we’re pleased to share with you:
Twenty of you (Bird Studies Canada’s volunteers and supporters) came out to a morning birding event in Stanley Park, where one ten-year-old saw his first Great Blue Heron!
Bird Studies Canada led or co-led 29 presentations and activities as part of the congress and 7 public events as part of the bird festival.
Our scientists co-convened very well-attended science symposia on wildlife tracking, Citizen Science, and invasive species on islands (the rooms were overflowing!).
Twenty-four presentations at the congress featured the Motus Wildlife Tracking System, representing international growth in this collaborative research network. Possibilities for installing Motus receiving stations in two new countries – Mexico and Brazil – were identified.
One hundred and fifty champions for bird stewardship attended a Stewardship Roundtable co-hosted with the Stewardship Centre for BC. The roundtable included workshops about bird habitat on agricultural lands, cats and birds, bird-glass collisions, and more. As part of this event, over $1000 was raised to sponsor ‘Budding Birder Kits,’ which Bird Studies Canada will place for lending in BC libraries.
Three new student prospects were recruited for the Long Point Waterfowl and Wetlands Research Program.
A highly successful Canada Evening reception co-hosted with the Society of Canadian Ornithologists drew 1350 attendees. Featured speaker Margaret Atwood presented remarks on bird conservation and the inspiration behind her graphic novel series, Angel Catbird.
The impact of the congress and festival was far-reaching! Footage of the festival’s exuberant opening parade was broadcast live on CBC’s The National, and other stories about the festival and congress were distributed through nearly 150 media outlets.
Our team at Bird Studies Canada would like to acknowledge all of our partners, and their volunteers, for the hard work they poured into the congress and festival, as well as the sponsors who made these events possible. We would also like to thank all of our friends, supporters, and fellow bird lovers who came out to the events or followed them from afar.
If you’re interested in seeing more highlights from the congress and bird festival, you will find plenty by searching the hashtags #IOCongress2018 and #vanbirdfest on Twitter.