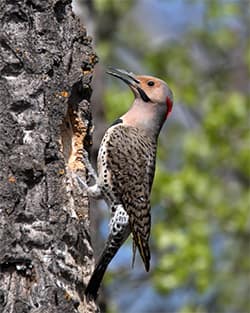 Two subspecies of this woodpecker occur in Canada: the “yellow-shafted” and the “red-shafted.” As you might have guessed, they are distinguished by the colour of their flight feather shafts, among other differences. Red-shafted birds are found in the western provinces while their yellow-shafted counterparts dominate the east. In parts of BC, Alberta, and Saskatchewan, you may observe hybrids combining features of both subspecies.
Northern Flickers can reliably be encountered at some point during the year in every Canadian province and territory except Nunavut. Good places to look are open woods and forest edges, including in urban, suburban, and agricultural areas. Look down – they tend to forage on the ground for ants and other insects. You might notice their bright white rump-patches as they fly up into the trees.
This species is known for the “dance” it performs during courtship and territorial disputes. Two birds of the same sex face off and bop their heads, often while an individual of the opposite sex watches.
While the Northern Flicker remains common and widespread, it is declining. Breeding Bird Survey data indicate that its population in Canada diminished by an estimated 33% between 1970 and 2017.