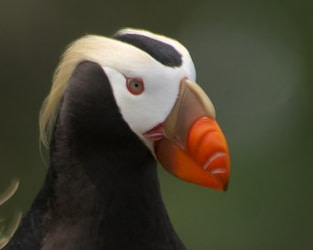 On September 13, the Minister of Fisheries and Oceans, Jonathan Wilkinson, announced the creation of the Scott Islands Marine National Wildlife Area on Canada’s Pacific coast. The area is the first marine area to be protected under the Canada Wildlife Act, and its establishment follows years of consultation with Indigenous Peoples, the government of British Columbia, and stakeholders. Bird Studies Canada is encouraged to see this important step being taken to protect seabirds and other marine life that rely on Scott Islands.
The new 11,546 km2 marine protected area is located off the northwestern tip of Vancouver Island, and serves as habitat for the islands’ seabirds, species at risk, and other wildlife. With some of the most diverse marine ecosystems on Canada’s Pacific coast, the Scott Islands area provides key ecological breeding and nesting habitat for 40% of the population of seabirds that breeds in British Columbia, including 90% of Canada’s Tufted Puffins and 95% of Pacific Canada’s Common Murres.
The federal government has committed over $3.2 million from 2018 to 2023 to support management, research, monitoring, and the removal of introduced predators. An advisory committee will also be established to provide advice and input into the development of a management plan for the Marine National Wildlife Area. A final management plan is expected in 2019.
“The establishment of the Scott Islands Marine National Wildlife Area represents a key step towards protection of Pacific Canada’s largest seabird colonies,” says Dr. David Bradley, Bird Studies Canada’s Director in British Columbia. “Bird Studies Canada looks forward to continuing our work in the Scott Islands with Environment and Climate Change Canada to increase seabird protection from invasive mammals, as we have done in Haida Gwaii since 2014. These and other conservation measures, for example securing the seabirds’ fish prey, are important next steps for the area’s ecological integrity.”
Concurrently with the Government announcement, Shell Canada announced its intent to voluntarily release almost 50,000 km2 of exploratory permits in the Queen Charlotte and Tofino basins, which overlap with about one-third of the newly designated Scott Islands marine protected area. Bird Studies Canada welcomes the news that wildlife in the region will not be impacted by the consequences of this particular development potential.