This article was written for Bird Studies Canada by UBC Press 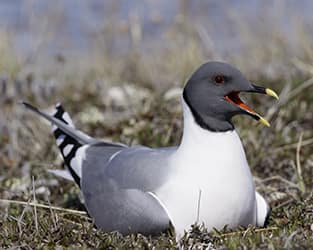 Thanks to a new publication supported in part by Bird Studies Canada, the world can discover some of Canada’s most fascinating bird species. Birds of Nunavut, edited by James M. Richards and Anthony J. Gaston and published by UBC Press, is the first complete survey of every species of bird known to occur in the territory of Nunavut.
The two-volume set documents 295 species of birds (of which 145 are known to breed in Nunavut), presenting a wealth of information on identification, distribution, ecology, behaviour, and conservation. Lavishly illustrated with over 800 colour photographs (showing plumages, nests, eggs, and young for most breeding species) and 145 range maps, it is a visually stunning reference work on the birds that live in and visit Nunavut.
Birds of Nunavut is a must-have for bird enthusiasts of all sorts, including birders (both serious and armchair), ornithologists, researchers, naturalists, resource managers, and tourists. Volume 1 of this two-volume set contains species accounts for the nonpasserines (from Ducks, Geese, and Swans to Falcons). It also provides an overview of Nunavut’s geography and ecology, bird conservation concerns, and the history of the study of birds in the territory. Volume 2 provides species accounts for the passerines (from Tyrant Flycatchers to Cardinals), as well as four appendices (including a species checklist).
If you are planning on attending the 27th International Ornithological Congress, do go by the UBC Press booth to see Birds of Nunavut. The price of the two-volume set is $125 Canadian. You can also order your copy online on the UBC Press website. Happy birding!

The Story of Birds of Nunavut
This massive endeavour had its beginnings as a checklist compiled by Jim Richards in 1999. Jim, a naturalist and award-winning photographer, and later Tony Gaston, an ornithologist and senior scientist, gathered around them a team of sixteen other experts, who had a combined total of more than 300 seasons of fieldwork in Nunavut. Their intention was to write a complete text on the birds of the territory.
But there was another purpose for writing the book. Namely, to document the changes that were happening in the Arctic due to climate change, which is disproportionally impacting the circumpolar North. Birds of Nunavut would serve as a guide for future development and conservation efforts, as well as an important benchmark for measuring the effects of climate change. As Robert Bateman said of the book, “I especially enjoy the emphasis on birds in this book, not only because I am a life-long birder, but also because birds are literally the canaries in the coal mine. Preserving their habitat relates directly to preserving ourselves.”
When the book proposal for Birds of Nunavut arrived at UBC Press, the editors knew right away that they were facing a publishing challenge due to the length and complexity of the manuscript, the hundreds of photographs and maps that needed to be produced in colour, and a tight schedule. UBC Press immediately launched a fundraising campaign to cover the costs for the book.
Both the Press and the editors were thrilled that several organizations – from small naturalists’ clubs to the Government of Nunavut – answered the call for donations. Bird Studies Canada was one of the first organizations to enthusiastically throw its support behind the project. Bird Studies Canada’s generous support for Birds of Nunavut helped to persuade other donors to pitch in, too. As a result, the needed money to produce the book was raised and production started soon thereafter.
The first copies arrived in early August, right on time for the 27th International Ornithological Congress in Vancouver. Of course, none of this would have been possible without the incredibly hard work and dedication of the two volume editors, Jim Richards and Tony Gaston; contributor Vicky Johnston, who helped with the fundraising efforts; and the book’s production and editorial team: Holly Keller, Nadine Pedersen, Alexa Love, Frank Chow, Irma Rodriguez, and Eric Leinberger, all who tirelessly worked to make this book a reality.