Neonics Harm the Birds AND the Bees 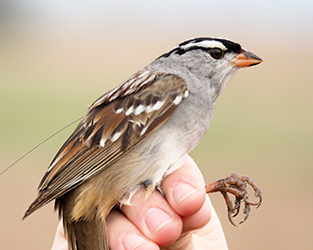 Results of a new study published Sept. 13 in the journal Science indicate that widespread use of a neonicotinoid insecticide could be contributing to steep declines in songbird populations.
The researchers found that White-crowned Sparrows exposed to a dose of the insecticide imidacloprid – a modest amount that a wild bird in an agricultural area would be likely to consume – lost weight and delayed migration longer than birds who were not exposed. These impacts could reduce a bird’s chances of surviving and reproducing.
Dr. Margaret Eng at the University of Saskatchewan was lead author on the study, working with Dr. Christy Morrissey, also at the University of Saskatchewan, and Dr. Bridget Stutchbury of York University. The team conducted its research at Long Point Bird Observatory in southern Ontario, a migratory stopover point for the sparrows. They measured the birds’ body composition before and after exposure to small doses of imidacloprid, and tracked the sparrow’s movements with Bird Studies Canada’s Motus Wildlife Tracking System.
Two treatment groups of sparrows were exposed to either a “low” or “high” dose of the insecticide. Sparrows that received the “high” dose (still a small amount) lost 6 percent of their body mass, on average, within just 6 hours. Sparrows in this group also took an extra 3.5 days, on average, to resume migration, compared to sparrows in a control group that were not exposed to imidacloprid.
“Both of these results seem to be associated with the appetite suppression effect of imidacloprid,” says Dr. Margaret Eng. “The dosed birds ate less food, and it’s likely that they delayed their flight because they needed more time to recover and regain their fuel stores.”
Neonicotinoids like imidacloprid are the most widely used group of agricultural insecticides in the world. They have been shown to have toxic effects on insects, and this study adds to growing evidence that the negative impacts extend to other organisms as well.
“Neonics have far-reaching effects in the ecosystems where they are released,” says Dr. Silke Nebel, Vice-President of Conservation and Science at Bird Studies Canada. “The continued use of neonics in Canada directly contributes to the decline of our bird populations, and their insect prey.”
In April of 2019, Health Canada completed re-evaluations of three neonicotinoid pesticides, including imidacloprin. It announced that it would be phasing out certain uses of the pesticides and changing restrictions for certain other uses. However, this stands in contrast to the European Union’s 2018 decision to ban all outdoor uses of the same three neonicotinoids.
Funding for the research published in Science was provided by the Natural Sciences and Engineering Research Council of Canada (NSERC) Discovery Grants Program, the Kenneth M. Molson Foundation, the NSERC Research Tools and Instruments Grants Program, and a Mitacs Accelerate Fellowship in partnership with Bird Studies Canada. 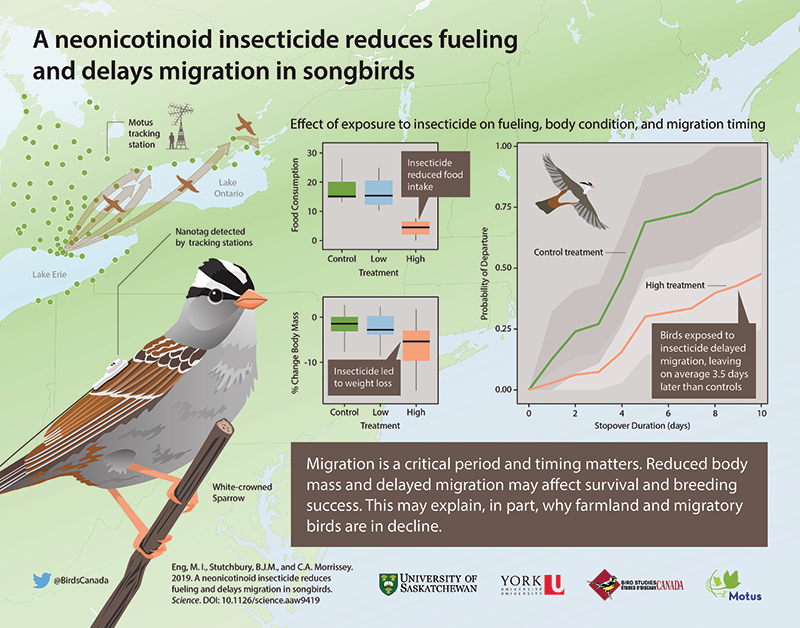 Click here to see a larger version of this infographic.