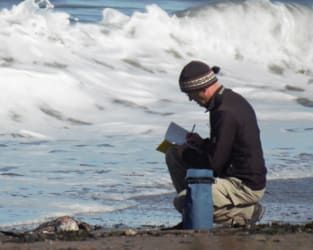 Last week, I set off to join an active team of volunteers conducting some of the first Beached Bird Surveys of the season, travelling along the Côte-Nord and the Bas-Saint-Laurent, and around the Gaspésie peninsula. I expected to note changes along many beaches, and to see firsthand ravages of the violent storms and high tides that affected many areas of eastern Québec over the winter.
The Québec chapter of Bird Studies Canada’s Beached Bird Survey is a long-term program collecting baseline information on the causes and rates of mortality of seabirds and other species using the Estuary and the Québec portion of the Gulf of the St. Lawrence. In 2016, data were submitted from 250 visits to 54 beaches, representing a total of about 90 km of shoreline. In total, 101 beached birds of 22 species were reported. Although it was not possible to determine the actual cause of death of many of the birds, none died as a result of oiling, and there were no signs of oil deposition along the beaches surveyed. In fact, nearly 50% of carcasses showed clear signs of natural death due to predation by raptors breeding, summering, or migrating along the St. Lawrence.
Some participants also collected checklist data of the live birds they encountered, providing a valuable profile of beach, shore, and inshore water use by over 68,000 shorebirds, gulls, waterfowl, and other taxonomic groups, totalling 137 species. This included information on locations used by nine species at risk, many from areas that are otherwise infrequently visited by birders.
Beached Bird Surveys are interesting at any time of year, but June is a particularly magical month to be out along the St. Lawrence. In addition to the numerous seabirds to be seen, the first Common Eider ducklings of the year are taking to the water, and Bank Swallows are active along a number of beaches, flitting in and out of nest tunnels excavated in the dunes and faces of raised beaches.
Unlike many bird surveys, you don’t need to be up at the crack of dawn or out late in the evening to participate. If you walk a section of beach regularly, or perhaps beachcomb from an ATV, you can help. If you live in one of the above regions, or on the Îles-de-la-Madeleine, and you are interested in joining the survey, please email me at acoughlan@birdscanada.org.
This project is undertaken with the financial support of the Government of Canada, and with the much-appreciated help of the Club des Ornithologues du Bas-Saint-Laurent.