Meet the Bank Swallow – the star of our 2022 Birdathon shirt!

The sun is shining, the air is warm, and meadow marsh plants gently sway in the breeze. Suddenly, the quiet turns into twittery chatter as hundreds of swallows swoop in and land on the tall cattail stocks only metres away. And just like that – even as my waders flood and I sink to my knees in mud – I feel like I’m in a dream. Few things in life are as awe-inspiring as seeing large flocks of birds. While many bird species can be found in large groups, few are as beautifully noisy and as accomplished fliers as the Bank Swallow.

Bank Swallows roost in wetlands overnight communally with other swallow species. This leads massive groups of birds to form in one location. Roosting in a large group benefits each swallow by lowering the chances that it will get eaten (i.e., lowering predation risk) and by enabling it to spend less energy catching its food (i.e., increasing foraging efficiency) compared to being alone. The magic of seeing these massive roosts is becoming rarer as many bird populations continue to decline.

Bank Swallows on the edge

Participants who go birding for conservation during the 2022 Great Canadian Birdathon will receive a t-shirt with a Bank Swallow design by Alex Nicole. We chose to highlight the Bank Swallow on this year’s shirt because, unfortunately, it needs our awareness and help. The Canadian population has declined by 98% over the last 40 years. In fact, the group of birds the Bank Swallow belongs to is seeing a steeper population decline across Canada than any other group. This group is called the “aerial insectivores” (birds that eat insects while flying), and it includes swallows, swifts, nightjars, and flycatchers.  Now, the Bank Swallow is listed as “Threatened” under Canada’s Species at Risk Act and is in need of conservation action. While not fully understood, the causes for its decline include: climate change, loss of breeding and foraging habitat, and an increased use of pesticides limiting abundance of its insect prey. ​ 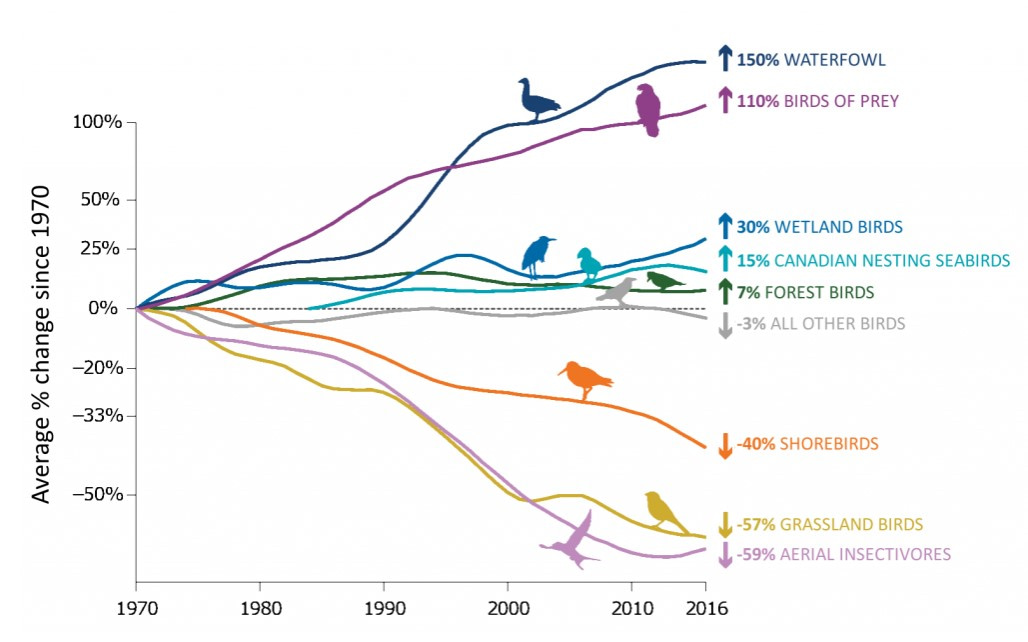 Graphic from: The State of Canada’s Birds 2019, http://nabci.net/resources/state-of-canadas-birds-2019/

Despite this decline in Canada, Bank Swallows are relatively common globally. They are found on every continent except Australia and Antarctica. In North America, Bank Swallows breed in the northern United States and in all provinces and territories (although rarely in Nunavut) in Canada. Bank Swallows that breed in North America spend the winter in South and Central America, with the highest concentration found in the Southern Cone Grasslands.

Bank Swallows are the smallest swallow species in Canada. They weigh about the same as an AAA battery and are about 12 cm long. They have a brown breast band, white underparts, brown upperparts, and a forked tail. 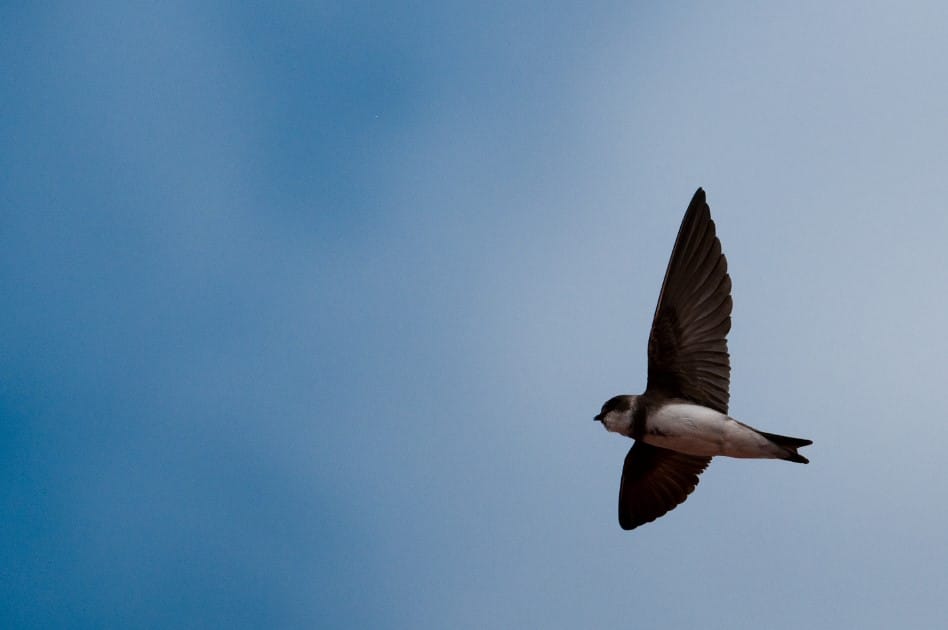 Bank Swallows’ communal nest sites, or colonies, are located along sandy, near-vertical (>70°) slopes, banks, or cliffs. They are often along eroding river banks and natural bluffs. Bank Swallows also nest in human-created habitats such as gravel pits or quarries. Colonies can range from a few pairs up to thousands of pairs.

During the breeding season, male Bank Swallows dig burrows and a nest chamber into the eroding slope to attract females. Once a pair has formed, the female constructs a nest out of leaves and grasses in the nest chamber. The female will lay 3-5 eggs and fledged young will emerge from the nest chamber after 18 to 21 days.

Bank Swallow at its nest Photo: Brock and Sherri Fenton

When you participate in the Great Canadian Birdathon this year, we hope you will share the story of the Bank Swallow’s decline and some facts about this fascinating species with those who notice your shirt. Thanks for taking part in this event to raise valuable funds for bird conservation! If you haven’t signed up yet, you can do it here: https://birdscanada.org/you-can-help/birdathon/

In an effort to stop the decline of Bank Swallow populations, Birds Canada, along with partners in an Atlantic Canada Bank Swallow Working Group, are looking to address current knowledge gaps, monitor the population, and examine the extent and quality of their nesting, foraging, and roosting habitat. If you live in Atlantic Canada and would like to volunteer with this project, please visit NatureCounts. We at Birds Canada encourage everyone to learn more about Bank Swallows and other aerial insectivores.  I hope that, like me, you’ll have the chance to enjoy a magical experience with Banks Swallows in the wild! 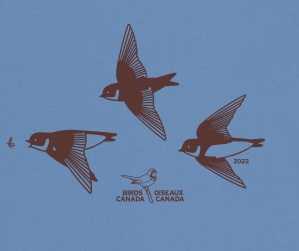