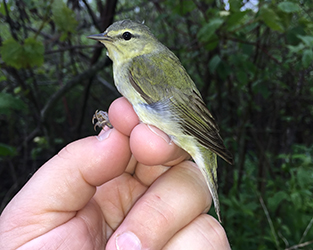 Spirits were unusually high for a damp and overcast Monday morning at Long Point Bird Observatory on May 29, 2017. That’s because a remarkable milestone was reached: the banding of the observatory’s one millionth bird!
Our friends, volunteers, and staff had been wondering for months which species the millionth would be. It turned out to be a hale and hearty female Tennessee Warbler, most likely on her way to breeding grounds in the boreal forest. Bird Studies Canada President Steven Price carried her from the mist net to the lab at LPBO’s Old Cut research station, where Migration Program Manager Stu Mackenzie did the honours of measuring and banding her.
Long Point Bird Observatory is the Western Hemisphere’s longest-running bird observatory, and its first to band one million birds. LPBO was established in 1960 by a small group of passionate volunteers. Among them was Dr. David Hussell, who envisioned banding and counting the large number of birds that pass through Long Point over time to create a volume of data from which population trends could be derived. The standardized methodologies for migration monitoring (using bird banding and bird surveys) are still used today. Long Point Bird Observatory’s inaugural banding – that of a Song Sparrow – was done by Pat Woodford on April 2, 1960.
It is fitting that the millionth bird banded was a Tennessee Warbler. This species breeds almost exclusively at remote, inaccessible sites within Canada’s boreal forest, where it is difficult to count birds. Programs such as the North American Breeding Bird Survey are therefore not very effective at monitoring its population. Counting these birds on migration at Long Point and at about 20 other observatories belonging to the Canadian Migration Monitoring Network is more practical, providing our best understanding of the population trends of remote breeders like the Tennessee Warbler.
One million is a big number, but this milestone represents much more than just a large quantity of birds banded. It is a tribute to the efforts of hardworking volunteers and staff, and to the volume of data recorded at Long Point Bird Observatory over almost 60 years. It symbolizes thousands of volunteers trained and over 50,000 students engaged in education programs. It represents collaborative research and growing understanding as new technologies such as the Motus Wildlife Tracking System come online and are used, in concert with banding, to provide a fuller picture of bird populations and movements.
Bird Studies Canada’s Long Point Bird Observatory has kept pace with changing times while staying true to the vision of our founders. We could not have reached this point in our history without the work of dedicated, innovative, and inquiring volunteers and supporters. We extend our deepest gratitude to all who have played a role in LPBO’s continuing success. Like the Tennessee Warbler we banded on May 29, you are each one in a million.