Let’s Make the 2018 Birdathon Even Greater (for Birds!) 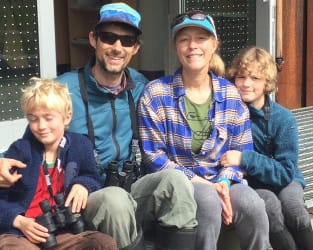 On behalf of birds across Canada, thank you to all who have supported the 2018 Great Canadian Birdathon. So far, 444 registered participants have raised more than $140,000, and donations are still coming in!
It’s not too late to make a donation or increase your fundraising impact. The proceeds you contribute as a participant or sponsor will advance bird conservation, research, and education across Canada through the work of Bird Studies Canada, dozens of conservation organizations, and the James L. Baillie Memorial Fund. Check out some of the valuable projects Birdathon participants and supporters like you have helped to fund so far.
Don’t forget that Birdathon participants also have the chance to win some great prizes. Be sure to get your donations submitted by July 31 to be entered in the draw. Participants each have one chance for the grand prize: an all-inclusive guided adventure with Eagle-Eye Tours! Stations from the Canadian Migration Monitoring Network that raise at least $100 have the opportunity to win a Kowa spotting scope and tripod, and all participants are also eligible to win prizes from Vortex Canada and Armstrong Bird Food, earning additional chances with every $250 raised. These prizes have been generously donated by our Great Canadian Birdathon sponsors.
When it comes to supporting conservation (and enjoying as many birds as possible), the dedication shown by Birdathoners is inspiring. You are also a creative bunch, inventing endless ways to make your Birdathons fun and meaningful. Here are just a few examples:
Team Macdonald Bliss (Andrew, Sally, Jasmin, and Joey) has been participating as a family since Jasmin was a young baby! Over the years, they have raised over $30,000 in support of Tommy Thompson Park Bird Research Station and Bird Studies Canada.
Godwit the Wind from the University of Alberta is one of several teams that have introduced an element of friendly inter-university rivalry to their Birdathons. So far this year, Captain Jeremiah Kennedy and team have raised over $4100!
Staff from Bird Studies Canada know how to walk the walk when Birdathon season rolls around. On May 26, the LPBO Cygnus Crusaders birded from Algonquin Park to Long Point, identifying 197 bird species – the third-highest total ever for an Ontario Big Day. They have also raised over $5750 and counting in Birdathon proceeds. The Lager-head Shrikes achieved an impressive total of 92 species on their Birdathon in Metro Vancouver, and have so far raised over $4100.
We hope you will join us in making the greatest possible difference for birds this Birdathon. Keep up your fundraising efforts or make a donation today. Once again – thank you very much!