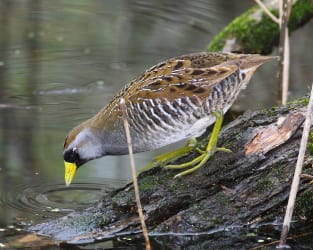 The 2017 issue of Bird Studies Canada’s Great Lakes Marsh Monitoring Program newsletter, The Marsh Monitor, is now available online. This issue provides information on the value of the program, the number of routes and stations surveyed over the years, latest trends for marsh birds and frogs, and recent examples of data being put to good use. Highlights include an estimated dollar value for the time volunteers have donated over the years (the number is staggering!), and, for the first time ever, graphs of abundance of 18 marsh bird species and occupancy of 8 frog species, showing the ‘ups and downs’ over the years. An exciting new photo gallery showcases the great fun people have while monitoring birds and frogs in Great Lakes marshes.
Not much has changed compared to previous reports in terms of overall trends. Populations of some species, including rails, Pied-billed Grebe, Black Tern, and Chorus Frog, significantly decreased between 1995 and 2016. Other species, however, saw significant population increases over the same period: Trumpeter Swan, Sandhill Crane, Green Frog, and Spring Peeper, to name a few. See the newsletter for more details.
What really stands out in this year’s issue are new graphs showing annual fluctuations. It’s one thing to know that a population significantly increased, decreased, or remained stable over the past 23 years, but during that time: did it change gradually, or bounce around radically from year to year? Such patterns often provide clues about underlying reasons for changes, such as rising or falling water levels, or expansions of invasive species. Some of the patterns are downright strange, without obvious explanation. So please take a look – we’re certain there is something that will intrigue every reader.
What have we learned over 23 years of monitoring? Some species are doing well, some are okay, and the rest are doing poorly. We believe these results tell us that many of the marshes in the southern Great Lakes region are healthy, as indicated by increasing or stable trends, but declining trends suggest that there are still problems that need addressing.
Our previous work based on Great Lakes Marsh Monitoring Program data shows that many of the marsh-dependent species that are in decline will benefit from conserving, restoring, or creating large wetlands surrounded by areas of limited urban land use, and from addressing issues within Great Lakes Areas of Concern. Additionally, declining species will benefit from conserving, restoring, or creating wetlands that are dominated by robust emergent plants, interspersed, and free of purple loosestrife and Phragmites. Promoting higher proportions of wetland cover in the landscapes surrounding wetlands would also be beneficial, as would addressing issues within Great Lakes coastal wetlands. These actions will help slow (or maybe even reverse) declining trends, and improve the overall health of Great Lakes marshes.
We thank the volunteers who survey marshes annually, right across the Great Lakes basin. The Great Lakes Marsh Monitoring Program is undertaken with the financial support of the Government of Canada, the U.S. Environmental Protection Agency, the Great Lakes Restoration Initiative, Ducks Unlimited Canada, the Government of Ontario, Wildlife Habitat Canada, Eastern Habitat Joint Venture, the John and Pat McCutcheon Charitable Foundation, and the U.S. Fish and Wildlife Service.
For further reading on research using MMP data, see “The Great Lakes Marsh Monitoring Program 1995-2012, 18 years of surveying birds and frogs as indicators of ecosystem health” and Dr. Doug Tozer’s 2016 paper “Marsh bird occupancy dynamics, trends, and conservation in the southern Great Lakes basin: 1996 to 2013,” published in the Journal of Great Lakes Research.