It Takes a Village to Track a Curlew 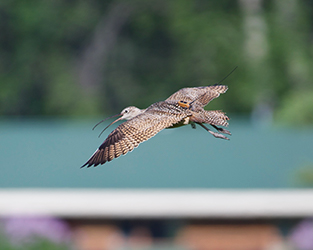 Since 2017, Bird Studies Canada has been tracking Long-billed Curlews breeding in British Columbia to study their habitat use and migration and gain insight into the challenges these birds face throughout the year. The curlews breeding in British Columbia are of particular interest because in this province, the species’ range has been expanding, while in other parts of North America, it has been contracting.
The Long-billed Curlew project hit new heights this May with a very successful field season near Prince George, BC. A team from Bird Studies Canada visited the area to document the recently expanded range of these pioneer curlews, and to confirm their presence and breeding in the most northerly part of the species’ range. In doing so, we witnessed some very interesting behaviours, such as a broken wing distraction display and several copulation events.

At the study site, we met with farmers, landowners and local naturalists, who helped search cow pastures and hay fields for breeding curlew pairs and nests. In the end, we successfully found 15 nests. We were able to band 10 birds and attach satellite tracking devices to seven of them. Our collaborators and some interested members of the public were excited to be on hand to witness this part of the research in action.

The tracking tags on the curlews emit signals every other day that are detected by low-orbiting satellites and provide location data accurate to within about 250 metres. This allows the research team to determine the timing of movements as well as the routes the birds take as they migrate south for the non-breeding season.
This was our first field season working with curlews at the Prince George site. In 2017, we tagged curlews at the Skookumchuck Prairie Important Bird and Biodiversity Area (IBA) near Cranbrook in southeastern British Columbia. We recently learned that one of these birds has already begun her southward migration. This female, which we call Pine, arrived at the Skookumchuck Prairie IBA in early April after spending the non-breeding season in California. She stayed at the IBA for 69 days, presumably bred, and left Canada on June 10 (see the yellow track on our curlew tracking map).
We will combine the data from all seven of the birds we tagged this year with the data from the seven birds we tagged in 2017 to produce a stunning picture of where the curlews that breed in BC spend their time throughout the year. This will enable us to better understand the threats these birds may face throughout their life cycle, and give us the tools we need to guide conservation efforts, both in Canada and in the U.S. 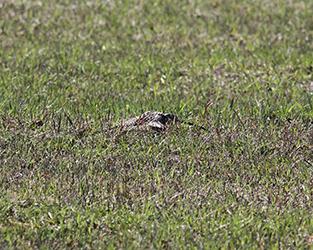 Finding a curlew on its nest is not easy!
Photo: David Bradley

Thank you to the landowners, farmers, and members of the Prince George Naturalists Club who assisted in our research this year. From directing us to the areas with the most curlews to granting us access to your land, your contributions were invaluable. We also acknowledge the generous support of the BC Hydro Fish and Wildlife Compensation Program, the Habitat Conservation Trust Foundation, the Columbia Basin Trust, Environment and Climate Change Canada, and the Smithsonian Institution’s Migratory Connectivity Project.
You can follow the birds’ movements and learn more about the Long-billed Curlew habitat and migration study by visiting the project page. You can also read more in a feature article from the Summer 2018 issue of BirdWatch Canada.