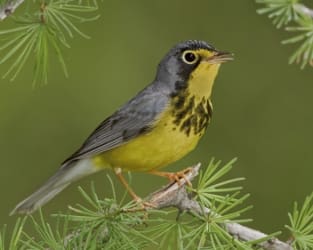 Important research is underway to understand the ecology of the Canada Warbler on its wintering grounds in the Colombian Andes. In a new video, you can travel to these montane forests and learn about a fascinating Ph.D. project by Ana González (University of Saskatchewan), funded in part by Bird Studies Canada.
Ana and her team have been investigating the Canada Warbler’s specific habitat needs, the relative importance of shade-grown coffee plantations as habitat, and factors driving population declines, with the aim of informing targeted conservation action. In the process, the researchers have used Bird Studies Canada’s Motus Wildlife Tracking System to study local and broad movement patterns. The study is currently in its fifth field season and is nearing completion.
The Canada Warbler appears on Bird Studies Canada’s logo, and is a cherished symbol of our organization. More than 80% of the global population breeds in Canada. Owing to population declines approaching 75% since 1970, the species was federally recognized as Threatened in 2008. In 2014, it was subsequently added as a species of high conservation concern by the United Nations Environment Programme Convention on the Conservation of Migratory Species of Wild Animals – a global environmental treaty.
Ana’s project is part of the Canada Warbler International Conservation Initiative (CWICI) – a collaboration among government agencies and various BirdLife International partners (including Bird Studies Canada) to prepare a hemisphere-wide conservation plan. The initiative was officially launched at the 2013 BirdLife World Congress in Ottawa, with support from Swarovski Optik, a BirdLife Species Champion for the Canada Warbler.
Bird Studies Canada’s Director of National Programs, Jon McCracken, has been participating in the Canada Warbler working group since its inception. In addition to research by Ana González, Bird Studies Canada has also supported work on the Canada Warbler by Dr. Kevin Fraser (University of Manitoba). His study used geolocators to document this species’ migration strategy, wintering areas, and how wintering areas are tied to North American breeding regions.
Since 2013, Bird Studies Canada has also participated in a series of international meetings to collaborate on advancing the conservation of Canada Warblers across their range. Separate working groups have been formed to focus on developing conservation strategies for both the North American breeding grounds and the South American wintering grounds. Although the chief threats to Canada Warblers fall on the winter grounds, stemming mostly from habitat degradation and loss, threats on the breeding grounds are still important. Many meetings of the two groups have been held. We hope to release a multilingual “full life-cycle” conservation plan later this year.
Like other neotropical migrants in trouble, conservation of the Canada Warbler will continue to require wide support from a hemisphere-wide network of agencies and organizations. No one country can hope to do it alone. The CWICI team is a truly great example of such international cooperation.